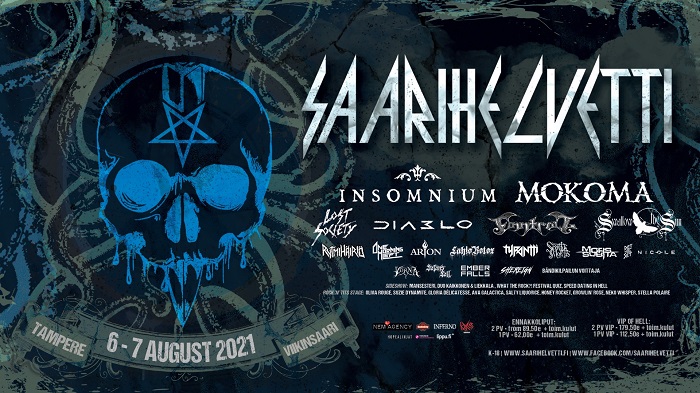 You might wonder why the hell you’d want to get stuck on an island in the middle of Finland this summer? Well, let us tell you why the Tampere based festival SaariHelvetti might very well be a really good reason and excuse for that. While usually the line-up consists of many of the quality bands Finland has to offer, flavored with some well chosen international names (Jinjer, Rotting Christ, Carach Angren to name a few), in 2021 they’ve gathered, like last year, a purely Finnish bill that will make many metal fans start drooling… Sounds tempting enough, but you’re not completely convinced yet? Ok, here are 10 really good reasons why you should get yourself stuck on “Viikinsaari” in Tampere during the first weekend of August (6-7th):

1. Legends of the Finnish metal scene

This year’s line-up has again a nice selection of absolute legends of the Finnish metal scene. What about Friday’s melancholy/melodeath tour de force that will be Swallow The Sun followed by Insomnium on the main stage? And before that, the beloved misfits of Finntroll will have taken over the stage with one of their rare and always welcome live sightings, one of the first since they crawled out of the bogs with a brand new album… Added to that, on Friday we’ll get to welcome the rather legendary heavy metal outfit Spiritus Mortis on the second stage, legend goes that these guys were the first to play doom metal in Finland!

While the Friday packs the most heavy hitters in this category, you can find a couple of absolute legends on the Saturday as well! You’ll get a good thrashing from one of the longest running thrash outfits of Finland with Mokoma, which is always quite the party. And just before them, one of the longest running Finnish melodic death metal outfits, Diablo will have demolished the place!

2. Hidden gems of the Finnish scene

Now, Finland also has a bunch of bands that are quite beloved in their own country and/or specific genre, but haven’t been able to get as much recognition as some of their colleagues. Of some, the Finnish language might have something to do with it, of others we guess a lack of luck on their side. But every single one of those bands that are featured at SaariHelvetti are damn right worth your time checking them out. On Friday we’re talking about the heavy metal punch in the face of Tyrantti, who will open the main stage, and the longtime running metal outfit of Nicole, who will close the whole Friday down with a blistering set on the second stage.

On Saturday we get two real party makers early in the day on the main stage. First we get the eternally drunk satanists of Rytmihäiriö, followed by the Finnish rap metal bomb that is Lähiöbotox! We have a feeling that there will be a lot of partying and boozing going on already… And even though they’ve been around since the early 2000’s, the Finnish melodeath outfit Mors Subita never really received the recognition they deserved and got a bit overlooked by many. Melodeath superfans will most likely have heard of these guys before and we can assure you that you’re in for a (head)banger of a gig!

SaariHelvetti of course also has plenty of room for those bands of the Finnish scene that are on the brink of breaking through massively on an international scale. Whether they’ve been around for a while already or not, every single one of these bands are ready to take over the world outside of their country, where they are already plenty popular. On the Friday, we get the ever-happy bunch of One Morning Left. These Tampere locals play a mean slab of metalcore while not shying away from an infusion of electronic music and samples. While we already loved these guys to bits before, with their just recently released album ‘Hyperactive’, we feel that the rest of the world is ready to fall in love with them as well. Definitely a must-see!

On Saturday, the modern thrashers/groovers of Lost Society are back on a stage! It will be an absolute blast to see this energetic bunch back where they belong and they’ll absolutely kick your butt from the mainstage! For the rest, it seems that most of the day, the second stage will be the home for “up-and-comers”… there will be time for the electro metal of Ember Falls, the melancholic and melodic metal of Vorna (a return of last year, but we ain’t complaining) and the highly popular symphonic/power metal outfit Arion, that just released a massive new album with ‘Vultures Die Alone’!

4. Fresh meat of the music scene

And lastly, SaariHelvetti wouldn’t be SaariHelvetti if they didn’t ensure a spot for a couple of new bands on the line-up… On Friday, the festival will be kicked off by the new rock outfit Shereign, featuring members from both Fear of Domination and Black Light Discipline. Followed by Detset, the modern metal/rock outfit that is ready to take on the world after signing with the German Out of Line Music label! While on Saturday there is room for a yet to be named “band competition” victor and the heavy metal outfit Satan’s Fall, that turned many heads with their debut full-length last year!

If the many quality bands on the regular stages don’t satisfy you enough yet, on Friday you can participate in the What The Rock quiz or check out Tampere based hip hop outfit Mansesteri on the Rock ‘N’ Tits stage… Or if you feel like you’d like to put an end to being forever single, you can hit up the restaurant to participate in the “Speed Dating in Hell” activities that same day. You never know you pick up the love of your metal life there…

On Saturday you get a taste of a whole other type of entertainment with the lovely ladies of Tampere Burlesque taking over the Rock ‘N’ Tits stage. With ringing names like Olivia Rouge, Suzie Dynamite, Dloria Délicatesse, Ava Galactica, Salty Liquorice, Honey Rocket, Growlin’ Rose, Neko Whisper and Stella Polaire, you know you’ll be in for quite the treat here! If the weather doesn’t get you all hot and sweaty, we’re sure these performers will accomplish that for you!

Finland is known for its lakes, gorgeous nature and being in tune with said nature at almost every turn. Having SaariHelvetti on Viikinsaari, an island in the middle of lake Pyhäjärvi in Tampere, brings in a combination of all of those. Part of the island is an actual nature reserve, that won’t be accessible for the festival visitors, but no worries, you’ll still be enjoying good music and a refreshing drink in the middle of the nature. And how cool is it that you’re being delivered to the entrance of the festival by ferry boat? It simply makes the whole experience so much more special…

Due to the gorgeous nature around you at all time, there is already a great atmosphere. And everyone on the island is there for the exact same reason: enjoying good music and partying like there is no tomorrow and no end to the festivities. Or at least till you have to get on the ferry back. It’s incredibly chill and there are plenty of stands with nice food (including a local sausage maker), merch stands and shops, bars,… to fill some time in between the bands you want to check out on the 2 stages that are only steps away from each other and have no overlap in bands playing. Or do like many metalheads seem to do: hang out on the small playground of the island… And even during these trying times of pandemic misery, the organisation has left nothing up to chance to make it the best and safest event around, providing plenty of space to keep your distance from others if you want to, hand sanatizing stations and even handing out facemasks and small bottles of sanatizer to every visitor getting on the ferry!

If all of this wasn’t enough yet to convince you, there is the city of Tampere where you’ll end up every night after the last notes fade away on the island. It’s one of the music hubs of Finland with a very lively music scene and plenty of legendary bands spawn from the city. If you don’t want to turn in for the night yet after being back on the Tampere shore, there will be plenty of bars and other places to still go to and usually the SaariHelvetti organizers provide you with a proper afterparty every night of the fest, with some cool extra artists or metal DJs (which still need to be announced)!

2 days of metal and rock music mayhem isn’t enough for you, you say? Well, no worries! Just get to Tampere already a day before SaariHelvetti kicks off and get a ticket for the pre-festival gig of the legendary Apocalyptica with support from the prog stars of Wheel and alt-rock/metal up-and-comers of Cyan Kicks! Now tell me that isn’t one hell of a starter for the weekend…

Get your tickets here: https://www.lippu.fi/en/artist/apocalyptica/apocalyptica-viikinsaari-tampere-2923086/

If you still want some tickets for SaariHelvetti, you’ll have to be quick to actually get your hands on something still… there are only tickets left for the Friday anymore!