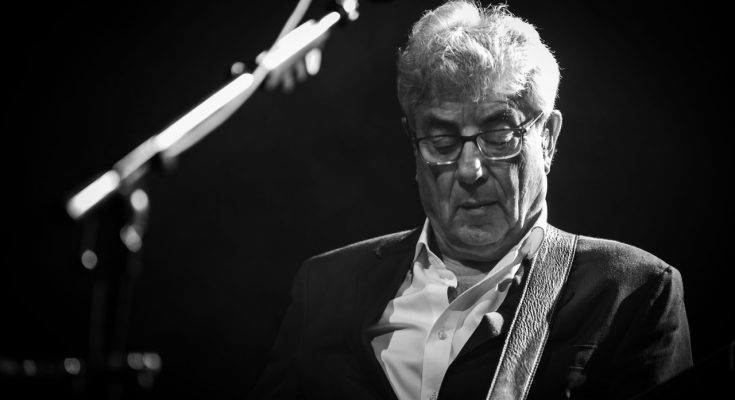 Back in 1972 legendary British hit machine 10cc first took place in the spotlight and they never left. We were invited to witness what felt as a complete best of with all their greatest hits and enjoyed every single minute of it.

The first surprise came in the form of Jasper Erkens. A name many of you might recognize as the teen idol that sang “Waiting Like A Dog” in 2009 and got even more famous with a cover of Gnarls Barkley‘s “Crazy“. After that he disappeared for a while to go study. He was the very first non British student to be accepted at the BRIT School for Performing Arts. He came back with a brand new repertoire and after playing support for Adele, Colbie Caillat, … we saw him as support for 10cc at De Roma in Antwerp.

A lot has happened since 2009. Jasper is no longer that curly haired teen idol, but a 28 year old bearded bloke. He does however still have the talent to get a whole crowd silent with nothing but his guitar and his voice. Playing a complete new set of songs like “Hop On The Rhythm” and “Your Words (Not Mine)“.

Whether it’s fan service or a genius move, opening with “Wall Street Shuffle” sure was a good idea. Of course they have a whole encyclopedia of hits to choose from, but this lively, rocking song had everybody moving in their seat and singing along from the first second. One thing that also became clear from the first song was that 10cc has a great light technician bringing us not the most complex or special, but certainly one of the most pleasing light shows ever, perfectly lighting the person singing or playing a solo whilst lowering light on the rest of the stage.

One thing 10cc has learned over the last 50 years and about a dozen line up changes is not only how to write, but also how to (re)arrange songs for live shows. For example, they know how to combine electric and acoustic guitars perfectly. Or where and when to add details like a bass solo underneath the whispering part in “I’m Not In Love“, giving everybody goose bumps. Another completely rearranged song was “Silly Love“. A song that historically always had a heavier intro, but now they almost made it a death metal intro. With matching strobe light show. Later in the song Rick, Iain an Graham lined up for some classic Status Quo style dancing, moving their guitars simultaneously to the rhythm and ending with the phrase “And now for something completely silly”, a wordplay on Monthy Pyhton‘s “And Now For Something Completely Different“.

The gig ended with “Dreadlock Holiday” which might be 10cc‘s most iconic single. right off the bat the venue downright exploded. The perfect harmony between Iain Hornal on percussion, Paul Burgess on drums and Keith Hayman playing marimba on keys was dazzling and got everybody wiggling their hips and dancing in their seats. And when they ended with a generic, yet lovely “I don’t like Antwerp. I LOVE it!” everybody jumped up and gave the band a standing ovation.

Leaving the crowd wanting more like a good band does they did come back for a little extra. Like an a capella version of “Donna“. Like an old style barbershop quartet, the four golden voices gathered around a microphone to sing a slow version of this hit, ending with drummer Paul running on stage and taking the last note 2 octaves lower like only he can. All in all an awesome show and exactly what people needed in these weird times!

Want to see more photos of this awesome gig? Head over here!