On the 22nd of January, thousands of metalheads from 72 countries  flocked together at Port Everglades in Florida to embark on the biggest metalcruise in the Caribbean: 4 days, 4 nights, 60 bands playing twice for a total of 120 shows. These metalheads were there for one thing: to bang their heads at 70 000 tons of metal! 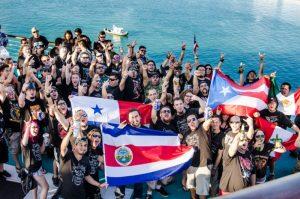 This year the festival was held on Royal Caribbean’s “Independence of the Seas”. A colossus of 339 meters long, weighing in at approx 160000 tons and with a capacity of 3500+. Despite the huge number of passengers the ship could hold, the cruise was sold out.

Upon check-in at the port we were handed over our sea pass, the most deceptive thing ever. This is the key to your room as well as your form of currency on board, linked to your credit card and used for the purchase of everything and anything on board. You also get the opportunity to have a group picture taken for purchase later on. After the check in, it’s time to embark. You walk up the gangway to be greeted by the lovely poolgirls who hand you your festival booklet and then it’s time to look for your room. It’s an odd, yet majestic feeling to walk through lush corridors and stand in lifts with heavy metal playing through the speakers. Once your room has been found it’s time to explore the ship and all the facilities it has to offer.

The ship offered a good amount of dining options. Who wouldn’t take advantage of an all you can eat buffet with all the diversity in food you can imagine? Yes, I’m talking about The Windjammer. This was the meeting place for the hungover to recover on a manly breakfast of bacon, scrambled egg and a few sausages. Ready for another full day of partying, drinking and metal and partying and… drinking. Another good restaurant that would have gotten rich if they charged me for eating there, was the pizzeria. Fast food at it’s best.. You arrive there, get a plate and a few slices of the pizza you request and done. It’s always fun to be gobbling down some pepperoni pizza and see one of your favourite artists do the same a few tables down.

Also for drinks there is no place for negativity. Everywhere, and I do mean everywhere, employees of Royal Caribbean stand about with a trolley full of ice cold Buds, Fosters and other refreshments. For the people seeking a sense of solid ground, the Dog and Badger was the best option. They also had a wider selection of beverages for the self proclaimed alcohol aficionado. The Belgian brewed Leffe was my favourite, but they also had other beers like Guinness, Carlsberg, Amstel Light, Chimay Bleu, …

Apart from food and booze, the ship offered various other entertainment facilities such as: an arcade, a fitness centre, rock-climbing, a surf simulator, mini golf, basketball and a spa.
There was also a casino with a bar where you were allowed to smoke, a popular meeting place to go between shows.
There were also several side activities. Next to the meet & greets with every band on the ship, various artist clinics were organised where certain artists shared their techniques with fans. There was a belly flop contest where you could join up for free to test your metal with other survivors. Jeff Waters from Annihilator hosted “Jamming with Waters in international waters”. This was a show arranged with artists from various bands that teamed up to play classical metal hits. Also, every day, after the last show,  it was time for karaoke. Here you could sing along with your favourite artists to your favourite songs ’till early in the morning!

There were four stages this year: The Alhambra theater, The Pyramid lounge, Studio B (Ice Rink) and of course.. The Pooldeck.

The Alhambra Theater is the biggest of all indoor stages. The room consists of a five floor high tribune in half a circle around the stage. This was really good for relaxing and just enjoying the band that was playing. In front of the stage there was a small area for the people wanting to be up close to the band and have a good mosh though.

The Pyramid Lounge was the smallest of all the venues with a stage hardly worthy of the name. I only went to see one band here, Skálmöld. Despite the size and feel of emptiness in the room.. I must say this was my favourite sound wise. Although, that might just be because of the band..

Studio B, also known as the ice rink, was the coolest -literally- room of them all. Originally intended for ice skating, Studio B made for a good venue for the “into the midst of the mosh” metalhead. It had a big open space and comfortable seating on all sides. The acoustic was very good and some of the bands playing there really brought down the place!

The Pool Deck: Claimed to be the biggest open air stage on the high seas, the pooldeck was in it’s own right massive. The outdoor swimming pool was covered by planks to create a good size open area. The hot tubs remained open so shows could be enjoyed from them and circlepits could be created in them. On three sides of the pool deck, you had elevated walkways from which you could view the stage.

For the people interested in the bands: 70000 tons really do their best to have a large selection of subgenres. From Pagan metal like Eluveitie, Skálmöld and Turisas to Industrial metal with bands like Koyi K Utho to the darker bands such as Cradle of Filth. Despite several hiccups that forced bands to cancel their shows, I must give props to the organizers for rescheduling everything from line-ups to my interviews with Cradle of Filth and Turisas. This really proved their dedication to the fans on the ship.

This year the ship anchored in Falmouth, Jamaica. On the ship and in the online check-in you could book from an array of activities to do on land. For the adventurers there was zip-lining, rafting, … and for the people out for relaxation they had dolphin swimming and a walking tour. I myself didn’t go on any adventures while in Falmouth. Or, like me and my friends you could just relax and drink cocktails at Margharitaville.

All in all I can definitely say that 70000 tons is as much a holiday as a festival. You don’t feel the pressure to have to go and see a band. It’s just as much fun to sit in the tub with a beer and talk to other metalheads from.. well.. anywhere. Despite the price of a ticket (that ranges from 666 USD to 3333 USD) you get an awful lot in return. The community really does do a lot to get everyone together. Several pre-parties on the beach and after-parties get people in the mood to get to know one another. You meet a lot of new people, gain a bunch of friends, create wonderful memories and above all.. you get to call yourself a survivor. 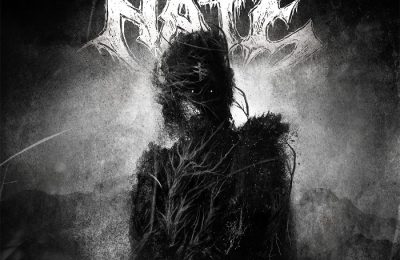