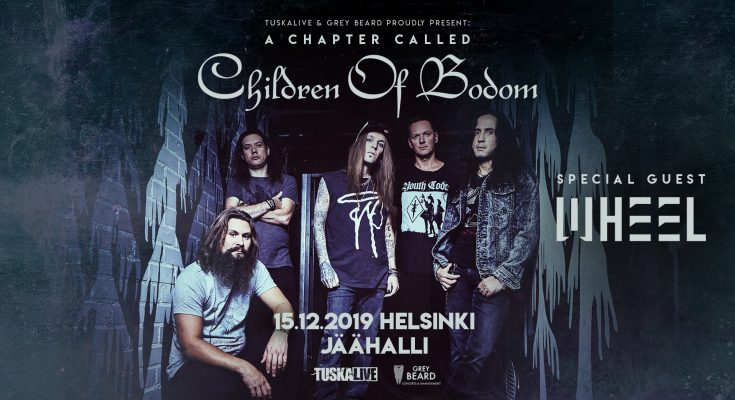 This night was one for the metal history books. A couple of months earlier Jaska, Janne and Henkka announced that they were leaving the metal institute that is Children Of Bodom and that their show at Jäähalli (also known as Helsinki Ice Hall) would be the last of the band as you know it. Since we are quite active in the Finnish metal scene, and since this seemed like such a momentous occasion, we just had to be there to see CoB play one last time for the big crowd gathered to bid them farewell.

Invited to open for this historical night was the up-and-coming local progressive outfit Wheel. Since the release of their debut full-length ‘Moving Backwards’, they’ve been all around Europe touring with Soen, played at some of the biggest prog festivals all over the continent, and don’t seem to slow down one bit. Like they said themselves during the show, this was their biggest local show as of yet and they were amazed by the experience. Smoke and loads of lights creating a special atmosphere that perfectly fits with their music and every musician showing their passion and love for their creations each in their own way. Recently added new bassist Aki ‘Conan’ Virta brings seemingly a new energy to the band with his rather active presence on stage, which I think lifts the band a bit more. Surprisingly, despite the quite different (and more difficult) music than Children of Bodom the crowd reacted clearly really well to their show. Which proves yet again how good these guys are over the whole line. Wheel is going to be really big in the future, mark my words.

Millions of fans all over the world have been listening to Children of Bodom for decades. Everywhere they go, they still draw rather big crowds. Their latest release ‘Hexed‘ had some really good tracks on it and all seemed well. But then came the news that bassist Henkka, drummer Jaska and keyboardist Janne were leaving the band, and that tonight’s show was going to be their last. So large a crowd has gathered to celebrate the metal institution that is Children of Bodom one last time with a bang.

And as soon as the guys came on stage, they were greeted by a welcoming roar that transformed into a crowd that went wild all through the show they played for the next hour and a half or so. They kicked off with ‘Under Grass and Clover’ and ‘Platitude and Barren Words’ from their latest release. But just in case people got worried that they wouldn’t leave room enough for their classics by playing more recent stuff, those were soon followed by ‘In Your Face’. And those first two tracks were actually the only ones from ‘Hexed‘ that came to pass. They put a setlist together to truly celebrate their complete backlog by including at least one track of each album they released. The guys regularly joked around between songs, seemingly as if nothing was wrong.

The whole set through, the crowd went berserk, but especially during the later half of the show they cranked it up! With classics like ‘Angels Don’t Kill‘, ‘Follow the Reaper‘ and of course ‘Needled 24/7‘, that was no big surprise. After that last one they disappeared for a while, but quickly came back to the sounds of thousands of people shouting for them to play an encore set of 4 of their biggest bangers. ‘Hate Me!‘, ‘Hate Crew Deathroll‘, ‘Lake Bodom‘ and ‘Downfall‘ (kind of ironic to play that last) were officially the last CoB tracks played live and closed an impressive chapter in the history books of metal music.

In a way I was a bit underwhelmed by the show as I was expecting them to go all out with a literal bang unleashing some pyro at us and such. But I guess you can sort of applaud them for keeping it rather simple and the core of the occasion: celebrating the music they’ve made the past decades. After the last notes of ‘Downfall‘ left the speakers, all the guys but one disappeared. A clearly very emotional Jaska came from behind his trusted drumkit to say a couple of words to us still, thanking the fans for their continued support. Tears were shed, both by Jaska and many people in the crowd. A pity that the rest of the band didn’t join him in saying one last goodbye to their fans. In any case, we thank you for the many years of hard work and heavy music and are looking forward to whatever new things will come from any of these talented dudes!

Setlist:
Under Grass and Clover
Platitudes and Barren Words
In Your Face
Shovel Knockout
Bodom Beach Terror
Everytime I Die
Halo of Blood
Are You Dead Yet?
Blooddrunk
I Worship Chaos
Angels Don’t Kill
Follow the Reaper
Deadnight Warrior
Needled 24/7