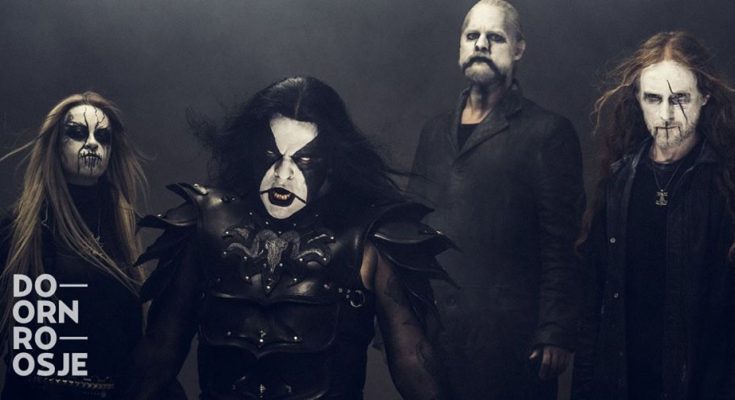 With the incredible amount of strong releases last year, it was unavoidable that most bands would be embarking on tours all over the world. Among those we have talent bomb Vltimas presenting their ‘Something Wicked Marches In’ in full, while 1349 dropped their seventh full-length ‘The Infernal Pathway’ in October. So they embarked on a European tour as support for Abbath, who since last Summer also has a new record out called ‘Outstrider’. The tour took them to the Doornroosje venue in Nijmegen, where we were fortunate enough to attend this night of black metal greatness.

First up were Nuclear, a band that hails all the way from faraway Chile. You could immediately tell these Spanish-speaking lads were happy to be bringing us some deadly shreds in the form of good ol’ thrash metal. Indeed, they were more than ready to get rowdy with Nijmegen. Only Nijmegen wasn’t. Not that much. The front row did look like they enjoyed themselves thoroughly, but the rest of the audience much preferred gazing at the stage from afar while throwing back a few beers in preparation for the unholy performances still to come. I must admit it did seem somewhat odd that a true-to-form thrash ensemble like Nuclear would be opening for a black metal line up, but hey, stranger things have happened. If at any point these thrashers noticed the audience was only still getting warmed up, it didn’t show. They threw one high-speed shredder after the other at our faces, and did not give us one moment to catch our breaths.

Vltimas was pretty interesting. I expected nothing but grandeur from this international collective that is brimming with unbelievable talent. It comprises of none other than David Vincent, the former – but rather legendary – bassist for Morbid Angel, on vocals, Cryptopsy‘s very own Flo Mounier on drums and, believe it or not, Aura Noir‘s Rune “Blasphemer” Eriksen on guitars. Lest ye forget, we’ve also got two very interesting live musicians here: Dodecahedron‘s Ype Terwisscha van Scheltinga on bass and João Duarte on guitars as well. While their sound isn’t entirely my thing, it is undeniable that the music is first-class.

What made Vltimas’ show so interesting was that they played their album in its entirety. I rarely listen to an album in another way than from start to finish. so imagine what it does to me when it happens live. This has only happened to me on three occasions (four, counting this one), and I go to a whole lot of gigs. Depending on the artist, it is often the way a record is meant to be heard. Such is the case with Vltimas‘ ‘Something Wicked Marches In‘. I highly recommend you check them out as the whole concept is great. I wish bands could do this more often.