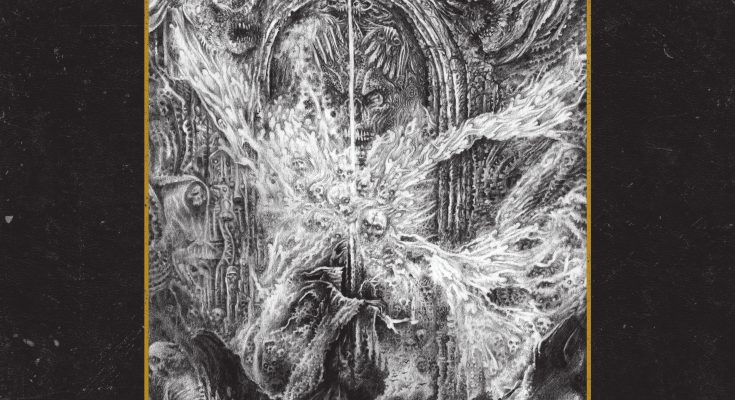 Through a fissure between space and time comes crawling Abythic’s  debut’ Beneath Ancient Portals’, an album that has been waiting patiently beyond our plane of existence, dwelling next to Yog-Sothoth until this long forgotten gateway was finally reopened.

Abythic is a fairly new band from Nordrhein-Westfalen in Germany. The Teutonic troupe had just one EP called ‘ A Full Negation of Existence’ under their belt from 2015, but has since then been picked up by connoisseur extreme metal label Blood Harvest. Despite the band’s young age their sound definitely comes from the Antediluvian times otherwise known as the early nineties, when doom death metal was still in its formative years.

Theirs is a strain that is not unlike Asphyx or Incantation. The dry guitar tone of the opening track reminds me a lot of the long forgotten and unfortunately underrated Finnish doomheads of God Forsaken. Like was often the case in those unhallowed, primordial times the songs never go for supersonic speed, but rather waver between mid tempo old school chugging and despondent doom dirges.

Regardless of the  pace, each song is dripping with enough bile and sulfur to fill a whole lake of fire as the  riffs  sounds like they were wrought barehanded from the tentacles of the Great Ancient One himself.