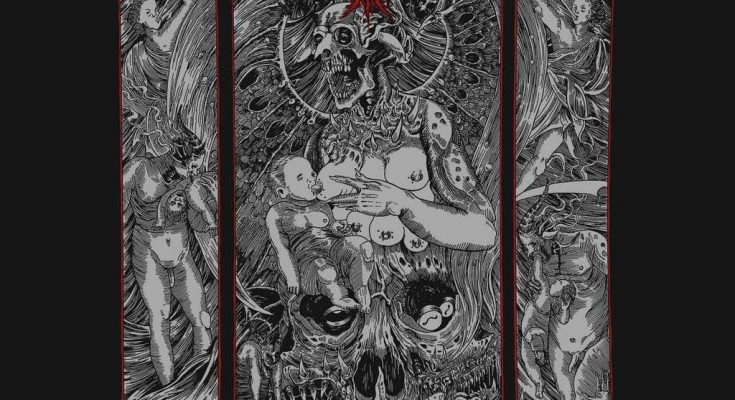 Hailing from North Rhine-Westphalia, German death metal trio Abythic has perfectly fused the crawling and the slow elements of death/doom into their third album “Dominion of the Wicked”. Since its formation in 2015 by founding member and song-writer MDB (guitars, bass, and vocals), Abythic released two albums and an EP and now the band is back with four brand new tracks. The lineup includes Tim Schlichting (drums), and Ulrich Kreienbrink (vocals), who together bring an atmospheric sound to their brand of death metal. Within the last few years, Abythic became one of the promising acts to rise from North Rhine-Westphalia. On this third album, the band somehow have changed the direction from earlier releases somewhat. The songs here are fully drenched in rhythmic patterns, with a slower doomy pace in the overall tone.

“Dominion of the Wicked” seems to be inspired by the early wave of death/doom bands. There are a lot of slow riffing going around the time length of thirty-five minutes. The opening track “At the Threshold of Obscurity” displays the gloomy qualities of the musical orientation with an excellent use of the guitars to create a sepulchral feeling of horror. The rhythm guitars set up an ominous sensation shifting the tempo to a slower pace. With low cavernous growls and steady pace of the drums that take a less crushing approach bolstering the pace with double bass. The prominent slow tempo of the music becomes imbued by the abundant use of the rhythm and lead guitars.

Abythic eschews any form of crushing death/doom metal albeit in a more atmospheric quality, “The Call” for example emphasizes the variety of the lead guitars, there’s undeniable effect towards creating a gloomy ambiance. During the slower moments, the vocals perform some ritualistic chants with a plethora of sweeping melodies that go quite well beyond the expectations. Giving it some kind of elegiac quality, the menacing chants are usually followed by roaring growls. Abythic takes an eclectic approach to doom metal that gives the song a more range of melodies. The latest album is a testimony of the creative song-writing and the new direction the band perceived to take.

Over the short time length, Abythic provides some heavy tracks full of cascading riffs, hypnotic melodies, and firm drumming all wrapped under the intensifying atmosphere. “Endless Tides” evokes the old death/doom bands such as Paradise Lost, Katatonia, and Decomposed. There is a nostalgic kind of old school flair within the dark melodies. Abythic affectionately brings many memories from the bygone past where they portray an honest principle of the early and mid-nineties death/doom metal.

The album cover art gave me the impression that I would be encountering another brutal death metal album. But instead, I was smitten by the oppressive themes of darkness, the final track “Augury of the Doomed” continues to provide a malevolent piece of death/doom closure.  The remarkable talent of the guitarist and the founding member MDB who exhibits his skills and songwriting abilities makes the album a must for the fans of melodic death/doom.

Abythic offers another slow crawling track by bringing a compelling mixture of their musical elements. The song opens with the deep vicious growls that are followed by sinister whispers where the song takes you on a horrifying journey to the dreary landscapes of wraiths. “Dominion of the Wicked” is scheduled for a release date on February 12th, 2021 through Iron Bonehead Productions. The album is highly recommended for fans of Father Befouled, Decomposed, and Pulchra Morte.