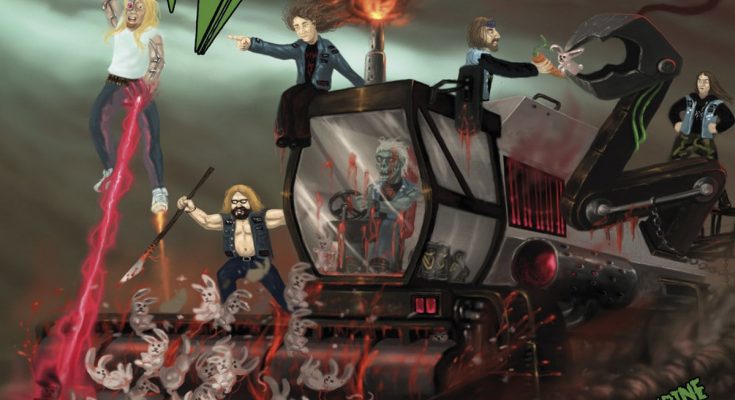 With Irish Acid Age you get a crossover mix of thrash metal and hardcore punk they call “hyper thrash”. They’ve released some critically acclaimed works on which their listeners get attacked by hyper active and wacko music. Now they’ve released a second full album bearing the very “catchy” title of Like A Runaway Combine Harvester In A Field Of Crippled Rabbits. A very lengthy album title for this short of a release (stopping at precisely 30 minutes).

Of that 30 minutes you could actually deduct another three and a half minutes, ’cause the last track The Prank Call is exactly what it says: a recorded prank call. So let’s have a look at the actual music then. If there’s one thing you have to give them, it’s that they have plenty of energy… Thrash metal and hardcore punk are not really the slowest music styles of course, but they take it to another level. Winding down is clearly not in their vocabulary.

The disadvantage of their speed is that there seems to be no time for many subtilities in the songs. There are regular moments that spark my interest and sound like it could be material for a hardcore punk or thrash metal anthem. But before you can get into it too much, it’s over and done already… My absolute favorite is Manifesto De Hyper Thrash with a very hardcore punk vibe, wanting to kick everyone in the face who stands in their way. “We’ll hyper thrash for life!”

I don’t know if I can say that I really enjoyed this album, it might actually be too blistering fast. There should be a warning sticker on this saying “Be careful. This record could possibly smash you to bits by the G-force generated due to the extreme speed!”. Fans of crossover thrash and hardcore punk could definitely find stuff to mosh and pogo on here. Acid Age is a crazy bunch of Irish fuckers who could probably really thrash up any place. I can only imagine the carnage and devastation they leave behind at a live gig… 7/10 for killing cute bunnies and probably quite some listeners with a pacemaker.