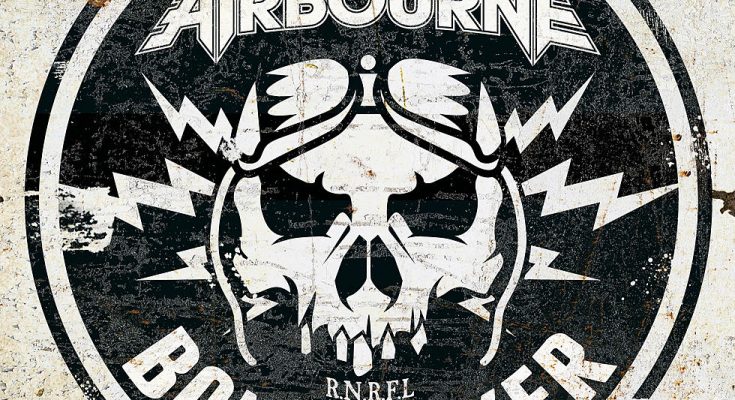 Almost as steady as clockwork, the Aussie rockers of Airbourne unleash another crushing hard rock album upon the world. About every 3 years, you can expect a new one to drop from this rock’n’roll machine. So here is number 5, ‘Boneshaker‘, for which they went sort of a different way with Nashville’s number one producer Dave Cobb. Let’s see if that changed something for their sound this time.

The album kicks off with the title track and first single ‘Boneshaker‘. It does everything you expect from an Airbourne song. It carries a strong legacy from AC/DC and rocks like no tomorrow. The only thing I’m really surprised by, is the overall mix. I have to admit that it sounds a bit more like a live recording, which really works for a band like this. But this track sounds almost more like AC/DC than Airbourne. I don’t hate the sound, but to be honest I’m not a big fan either. I always perceived Airbourne as a high octane energy and heavier new generation version of that classic AC/DC sound. You know, the same but soaked in a good amount of beer and fueled by nitro. That seems to have been taken out a little bit with the new mix.

And that seems to be true for most of the album. At times you can still hear that super gruff sound that Joel O’Keefe‘s voice normally has, but often it sounds almost too “clean”. Again, don’t get me wrong: from start to finish this album contains one after the other groovy, bluesy rocker and quite some of those will be shouted along to by many (probably including me). These guys are simply a whole lot of fun and are the way to go if you’re looking for that old school hard rock sound. In all its predictability you can throw down one hell of a party and more towards the later half of the album they actually start to hint back at the Airbourne sound I’m looking for like ‘Backseat Boogie‘, ‘Blood In The Water‘ and especially above all ‘Rock ‘N’ Roll For Life’! That last one is exactly what I wanna get from them: relentless rock ‘n’ roll that gets you going and makes your blood pumping!

To conclude: is ‘Boneshaker‘ a classic Airbourne album as we get to expect by now? Sure. Do you get half an hour of straightforward rock ‘n’ roll without any downtime? Most definitely! Does it hold up as strong as those first 2 albums of bone-crushing hard rock they released? At times, when they sound more like themselves than their inspiration. In any case, Airbourne keeps rock ‘n’ roll alive in their own way and on their own terms and I’ll always love them for that!