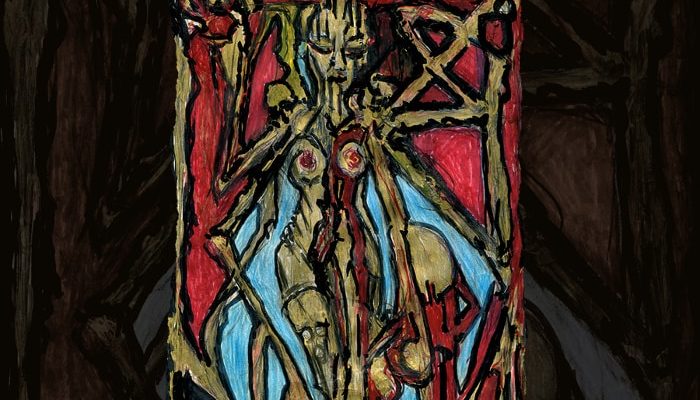 Often dubbed one of the most dangerous black metal bands to emerge from Finland, Ajattara is back after a six year hiatus! Ajattara delivers its eighth album Lupaus (“Promise”) via Svart Records, promising six rough years condensed into nine songs and 50 minutes of extreme and forceful metal played with a Satanic fervor and a relentless attitude.

As soon as the first tunes of Saatanen Sinetti blast out of the speakers, the pure evil and power hits you in the gut. Ajattara definitely hasn’t lost any of its edge during its break! Pounding drums, almost hypnotic raw guitar riffs with heavy tremolo picking and demonic vocals by Ruoja, only strengthened in sounding absolutely drenched in evil by the fact that all songs are bearing completely Finnish lyrics. There is just something to how Finnish sounds that absolutely perfectly translates into the brooding Satanist and pagan vibe that this band thrives on. This atmosphere of violence and brutally personal work is kept up throughout the full 50 minutes without having a single moment of weakness. They manage to keep the whole record interesting by infusing the raw and pure black metal with touches of doom metal (Suru and especially S.I.N.Ä., with even some doom/death metal sounding vocals), almost Satyricon-like black ‘n’ roll moments (the highly catchy Ave Satana, with a rumbling bass that features way more on the front row than is usual in black metal), synthesizer, acoustic guitars and they even dare to sprinkle some clean vocals in certain songs.

Some of my favorites on this release are definitely Ristinkirot and Suru for their surprising use of clean vocals that give it a pagan ritualistic vibe and bolster a great contrast with the otherwise harsh and raspy vocals. Besides those two I’d pick out that -for black metal- very catchy and singalong-ready track Ave Satana and as absolute number one the title track of the album Lupaus. The latter explodes immediately with raw power in your face and gets me to nod my head to the pounding rhythm. The buildup of the music reminds me somewhat of more progressive bands like fellow countrymen Amorphis (in which Ruoja actually was the first vocalist) or hints even a bit at Primordial. For me they could’ve perfectly ended the album on a high-note. But apparently they felt the urge to add Machete which in essence isn’t really a bad song, but its doomy black metal sound is a bit of a letdown after its predecessor.

Shortly said, Ajattara delivered one hell of an album again, with enough variety to keep you interested and invested till the end. It’s raw, dripping with evil, name-drops Satan on occasion and has some interesting ritualistic touches here and there. With the addition of the clean vocals and other instruments like synths and acoustic guitars, they give it a melodic touch that makes their music even possibly accessible for those who aren’t necessarily the biggest fans of the black metal genre. In my opinion without losing their credibility towards the real black fans. Great Scandinavian extreme metal that deserves a spot on your shelves/in your playlist!