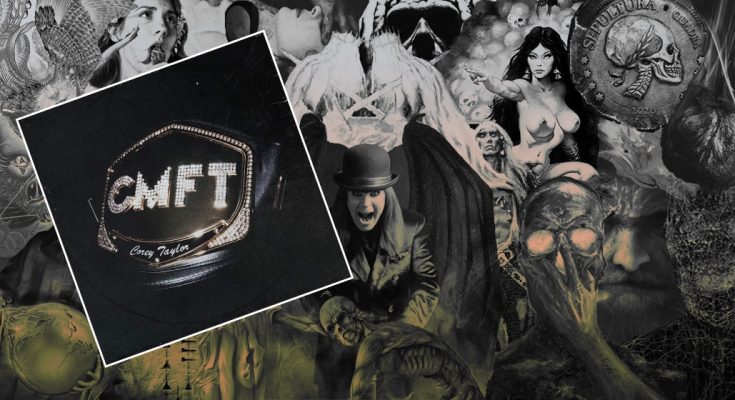 Well guys, it’s been one hell of a year to say the least. To be fair it hasn’t been all bad, we did get some wicked music to help us manage our way through the year in which we were made to choose between toilet paper, or friendship. I was lucky enough to have the difficult task of narrowing down all of the released music and choosing my personal top 10 albums from 2020!

Hear me out. Although this album only has 6 songs it doesn’t fail to deliver an experience to it’s listeners. We may already be familiar with the titles of these songs but it’s like they have been rewritten. Halestorm brings their widely known musical talents while maintaining their catchy beats. I appreciate the originals and their nostalgia but I will always welcome a new version of older songs. One of the best re-imagined songs on this album (In my opinion) is “Break In” featuring the lovely Amy Lee. These two women together is nothing short of invigorating! Give it a listen, and tell me what you think!

When translated in Latin the title of Seether’s latest album means “If you want peace, Prepare for war”. The fact that this album was released in 2020 seems too good to just be a coincidence, right? Either way, I was so excited to find out that Seether was releasing an album and when I first heard it I was not disappointed. It brings back some of the musical feel of the 90’s yet providing relevant material in its vocals. I’m someone who needs to like the vocals and actually listen to the lyrics of the songs and Seether checks those boxes as they provide great vocals, relatable lyrics and a good beat that you can jig to, you know… if you feel like it.

I don’t normally love live album’s. I think a lot of them don’t do any justice to the performers. The first time I stumbled upon I Prevail was when they were covering Taylor Swifts “Blank Space”. I hadn’t heard much music from them until shortly after Chester Bennington had passed away. A friend who was a very loyal follower of Linkin Park said that they had a special connection with the music these guys put out much like they had with Linkin Park. These guys are great at staying true to their sound and telling a story. They’re very open about the struggles in life, specifically mental illness, which is super important normally but even more so when you’re serving as an example to a widespread audience. When listening to their live album it sounds almost exactly like they do on their recorded albums which is HUGE.

Admittedly, I was sucked into this album because of the single “Antisocialist”. The lyric that really sucked me in was “Please stay away from me, cuz I don’t fucking like you”. If you know me… that’s my motto. Okay maybe not all days, but we all have those people where we just hope to never see them again. Shortly after this album came out I got to see them in concert with my best friend. Danny (lead vocalist) is definitely an entertainer and he’s super funny (they also sound great!). I can’t listen to this album without feeling the need to rock out, and even do some head banging! It just puts me in a good mood! I will credit Asking Alexandria for taking it from rock to a little slower with their song “I don’t Need You” featuring the angelic sounding Grace Grundy.

Considering this album was written in 7 months, it’s pretty epic. I’ve got to be honest though, when I first heard “Obey” I wasn’t a huge fan. I was upset that YUNGBLUD was in it. After hearing “Obey” a few more times I actually grew to really like it. It is catchy and also very fitting for 2020. Once I heard “Tear Drops” and “Parasite Eve” it was over for other tunes. I had this album on repeat in my car for a good two weeks (don’t judge!). I’ve always been a fan of BMTH and I am still a loyal follower. Even with them including YUNGBLUD in their music. It’ll be interesting to see what the future brings for this group! All I can say now is… Ollie, keep on belting it out!

5. Trivium – What the Dead Men Say

Oh, Trivium.. the sound these guys bring is almost hypnotic to me. I get so lost in Corey‘s voice as he serenades me into a melodic trance – okay, is that weird? In all seriousness they’ve got the heavy sound and provide overall bangers! These guys get me pumped up and ready to rock out. This is one band I have on my gym playlist to get me ready to sweat! Even though 2020 hasn’t granted me much gym time. Mostly I tell myself I’m going to work out, and end up just listening to music doing air guitar and drums. Same thing, yeah?

4. Marilyn Manson – We Are Chaos

The first time I knew I liked the darker things in life was when I listened to Marilyn Manson. Specifically “This is the New Shit” and his version of “Sweet Dreams”. I loved the aesthetic and the creepy residue he left on my mind after his music was over. I couldn’t get away from it. Through the years he has always been unapologetically proud to stay true to his self. Inspiring us to not conform to what society portrays as “normal” and “acceptable”. I have always looked up to him as an idol for that reason! His new album is nothing short of what you would expect from him. With the slight exception of the changing topics in the songs. He brings the dark sound we all love while pushing the limits on the lyrical content.

In This Moment brings out my inner spiritual self – how could they not?! Maria’s beautiful range of vocals and the moody music provide the perfect platform. You are able to close your eyes and let them bring you on a spiritual journey battling your inner good vs evil. This album is one I put on when I’m in the mood to just chill. Maria and the guys are definitely doing what they’re meant to do. From “Blood” and “Whore” to “Sick Like Me” there are multiple mentions of songs they’ve released making it a bit nostalgic. While talking about this album you can’t ignore the fact that they covered “We Will Rock You”. The best part? It features Lzzy Hale (Halestorm) and Taylor Momsen (The Pretty Reckless). If you thought that was a powerful song before – be prepared to have your hats blown off, holy POWER PUNCH!

Honestly Deftones is a newer listen for me, but man do I wish I had heard them sooner! Why did no one tell me about these guys?! This album is another one that I put on when I just want to melt into a musical induced coma. With this album in particular I get lost in the music rather than caught up in the lyrics. Also – can we note that they re-released White Pony? I wasn’t a fan back when they originally released it. The timing is perfect since I recently was introduced them! I think if everyone listened to Deftones we could all just be peaceful and less anxious all of the time.

This is the cherry on top of the delicious 10 tiered cake made of my top 10 albums of 2020. THIS is the album I was the most excited for! CMFT, Corey Taylor‘s solo album. In my mind Corey Taylor is one badass man! From Slipknot to Stone Sour and now his solo project. He keeps providing musical masterpieces and I cannot get enough. What can’t this man do? This album contains guests such as Tech N9ne and I don’t even mind. I feel that this man can do no wrong (unless, ya know.. he had YUNGBLUD in a song – KIDDING!) The music on this beauty is catchy, lyrically satisfying and even has a little humor in it. I look forward to hearing more of what Corey will come out with next. Whatever it is I am sure he will do amazing with it!