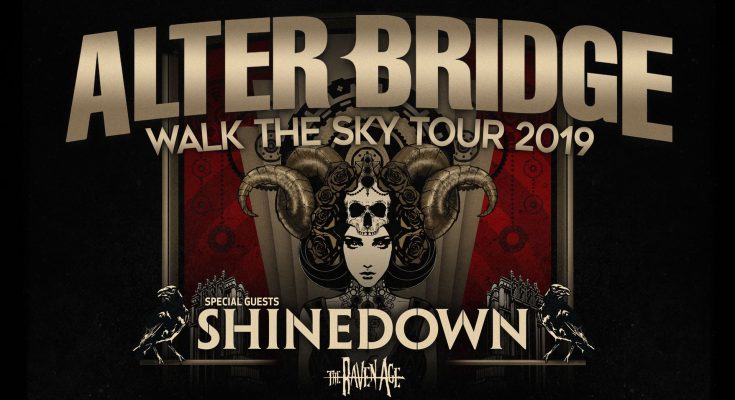 Recently, American rock band Alter Bridge released their latest album ‘Walk The Sky’ (for our review of it, go here) and of course they soon after embarked on a tour in line of that release. Formed in 2004, the combination of 3 musicians of Creed with the vocally talented Myles Kennedy, held a whole ton of potential that has come to fruition in the 15 years that they’ve been together. So we just had to be there in Helsinki at the 2nd stop of their European leg of the tour. With them they brought the American Shinedown and UK-based The Raven Age and the night went as following:

Opening for the night was the UK-based outfit The Raven Age. The melodic metal/rock band was a perfect choice to warm up the crowd that was already there early on. They were quite the energetic bunch and it’s clear that guitarist George Harris has gotten the music in his genes through his dad Steve Harris (yes, exactly that one you’re thinking of, bassist of the legendary Iron Maiden). Not to say that they all seem perfectly at ease on stage and one with the music. They released their new album ‘Conspiracy’ earlier this year and we got to hear quite a few tracks from that one live. All in all a really nice start of the evening.

But the revelation of the night must have been Shinedown. I’ve always like their music, but never caught them live. After seeing them for the first time tonight, I think I might have to see them more often! Their personal lights were placed on stage with big beams and several exclamation mark shaped lights in the back, referring to their 2018 album ‘Attention Attention’. Interestingly enough, their intro track was Lizzo‘s ‘Good As Hell‘, which brought a lot of weird looks and laughs, but somehow created an already elated vibe. The band came on stage dressed in different variations of the same yellow and black suits, where vocalist Brent Smith was wearing a more military inspired uniform.

The lights flashed and they kicked off hard with ‘Devil‘ from their latest release. From then on it was one big celebration of good rock music, singalongs, making connections with each other, picking each other and yourself up and a whole bunch of positive vibes! Brent suggested all of us to meet each other on which he came to shake the hands of the photographers in front of him, got the crowd to light up the room with their phones, ended up walking all the way to the middle of the crowd to see his fans up close instead of the distance of the stage and got everyone to jump, raise their fists and dance the night away. These guys know how to put a good show down that makes you feel good afterwards!

The stage got cleared, giving ample space for headliner of the night: Alter Bridge. At the back they set up a bunch of screens in a row combined with extra lights, all ready for a great show. The intro track ‘One Life‘ for their latest album ‘Walk The Sky‘ was put on and the guys strolled on stage like they were completely at home there. No fancy suits or outfits, no frills, just let the music speak. Which is exactly what this show was all about: good rock music packing heaps of melody and emotions, made and played by some very talented musicians.

With ‘Wouldn’t You Rather‘, the first track they played live was also from that new album and they continued interlacing those new tracks with a fine selection of their earlier releases. More towards the end, as expected, they gave us some of their most well-known tracks like an acoustic rendition of ‘In Loving Memory‘, ‘Blackbird‘ and ‘Metalingus‘. After a couple of encore songs, they bid us farewell and all we can hope is that they drop by in the country sooner than later: