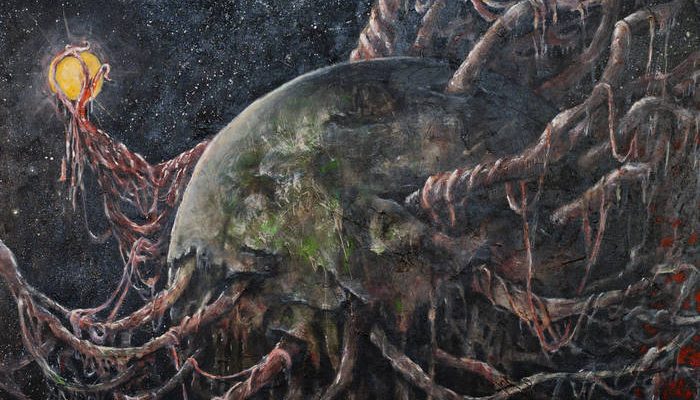 Hailing from Victoria, British Colombia, Canadian death metal duo Altered Dead conveys a solid rendering and grimy tone of old school death metal. The sophomore “Returned to Life” released on January 25th, 2021 via Memento Mori was well received from the critics within the death metal community. The album turned out to be a mixture of doom, d-beat, punk elements, and plenty of mid-paced sections where the guitars churn out some thick laden riffs. Containing nine solid tracks and one cover song, the band assembled organic ingredients from Swedish and American death metal. Although I’m not too fond of the raspy vocals when it comes to death metal the songs imbibe on the eighties era of death metal and specifically the rotten Swedish style. The album is packed with dense heavy riffs and the Canadian duo of Mic Dion (guitars, vocals, and bass) and Julian Rebel (drums, vocals, keyboards) delivers a solid performance displaying some good skilled guitar work.

Altered Dead draws influences from bands like Grave and Nirvana 2000, the opening track “Mental Suicide” infuses grooves into the music. Combining decent riffs and up-tempo drum paces, across the thirty minutes of the album’s duration, the drumming work takes rapid transition from mid pacing to blast beats. However, the band maintains raw tonality on a number of tracks like “Returned to Life”. While the tempo is mostly built on chugging guitars you can perceive the direct notions of punk and old-school death metal. The songs are charged with rotten riffs, bringing some powerful momentum into the tempo with slow doom metal tempos thrown to the mix. The album is far from monotonous or repetitive and this is one of the highlights of the album. It’s clear that the duo is trying to keep a balanced pace between the blasting sections and death’n’roll styles of the mid Entombed era. Most of the songs are short in length for example “Final Pathogen” spans under two and a half minutes.

Aside from the crunchy tone of the guitars, the drums bludgeon their way through a fast-paced tempo. It’s clear that Altered Dead takes some fundamental qualities of the Swedish death metal and the songs somehow show an array of punk and d-beat. While the slow vibes of the down-tuned guitars on “Empostomb” are among the best tracks of the album, the sluggish tone to death/doom riffs showcases various influences. Despite the spontaneous shift of paces, the music slowly pulls you into the swampy and boggy areas of death metal. On tracks like “Thrawing in Agony”, the jackhammer drums crushes the listener into a stampede of blast beats explosion. Ramping guitars and brutal alterations take hold of the listener. The guitars are heavily distorted and equipped with d-beat taking you to a galloping ride.

The following track “Ensanguined Path” settles into a rapid pace of blast beats that sets off into murky death metal riffs. The duo keep the performance within the expectations, although I found the slow doomy tracks more effective and crucial than the Swedish brew of death metal. “Rotting Outwards” is just an example of the band’s sharp songwriting, the violent outburst of drums and gnarly vocals seem to stumble upon some slow but effective guitar hooks. The album also includes a cover song “Into the Crypts of Rays” from the legendary Swiss band Celtic Frost.

“Returned to Life” is loaded with plenty of old-school metal influences from punk, groove, to death, and doom metal wrapped entirely in the duo’s combustible formula. After the enjoyably short listening session, I am quite certain that the band’s musical capability will continue to evolve. While particularly this may not be on my top list of death metal albums of the year the nine tracks are unnerving and full of twists weighted by the gripping guitars and solid drumming. This comes as a moderate recommendation for fans of old-school death metal.