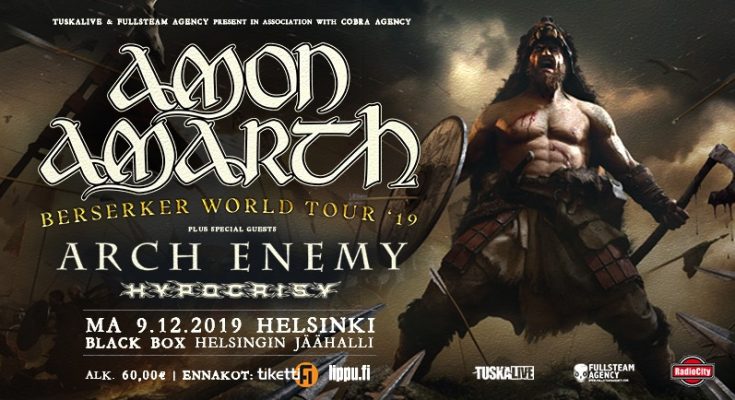 Amon Amarth delivered yet another album of their signature viking themed melodic death metal with ‘Berserker’ this year, which again held a couple of killer tracks. To celebrate this, they of course had to embark on an extensive European tour to light a fire under all of our asses. And to make the festivities even more badass, they brought along country mates Arch Enemy and Hypocrisy. Making the European leg of the ‘Berserker World Tour’ one of the strongest melodeath bills we’ve seen in a while. Of course we had to be there when they dropped by the Helsinki Ice Hall in Finland for a completely sold out night!

Kicking off the night, was the ever-popular death metal outfit Hypocrisy. Peter Tägtgren found some time in his ridiculously busy schedule to please the fans by blowing new life in the band for the time being. After seeing the energetic show, we can only hope that there is actually some new music on the horizon (and more shows of course). The band took over the stage appearing out of tons of smoke and were greeted by excited fans. And the fans were served a nice selection of tracks from the extensive catalogue of the band. This was really a prime example of why Swedish death metal was and still is so popular. Luckily more was coming still tonight…

Up next, another highly popular melodeath machine from Sweden. Arch Enemy has been ruling the stages all over the world and with Alissa on the mic it seems they’ve been only rising in popularity. And we have to admit that she’s quite the fun and entertaining stage presence. That combined with some stellar vocals and very talented musicians and you get a show that got many people present go berserk before the real berserkers of the night even got to the stage! Personally I was a bit disappointed that their classic ‘We Will Rise‘ wasn’t included in the setlist, but I guess you can’t have it all. In any case a perfect continuation of the night building up to the headliner.

Setlist:
Set Flame to the Night
The World Is Yours
War Eternal
My Apocalypse
Ravenous
Under Black Flags We March
The Eagle Flies Alone
First Day in Hell
Saturnine
As the Pages Burn
No Gods, No Masters
Dead Bury Their Dead
Nemesis
Enter the Machine

Apparently Amon Amarth thought the crowd wasn’t warmed up properly enough yet, because the amount of fire that was blasted our ways could warm a small country… Not totally surprising, they kicked off with ‘Raven’s Flight‘, one of the tracks off their latest release ‘Berserker‘. But up next were 2 rather old school songs with ‘Runes to My Memory‘ (during which they lit up some big runes in the back) and ‘Death in Fire‘ (during which they blasted even more fire in our direction than before), getting the fans to go nuts.

Which is something they seemed to keep up for most of the show, playing only a small amount of new tracks with a bunch of old school tracks that were clearly much appreciated by the fans. Throw on top of that all the theatrics where Johan uses a big-ass version of what looks like Mjolnir, the viking head where the drumkit is placed rises up, viking statues, viking warriors having a bit of a rumble on stage,… and you get a damn entertaining and kickass show that pleases the masses. Amon Amarth has clearly grown to reach great heights since the last time I saw these guys!

Setlist:
Run to the Hills (Iron Maiden song)
Raven’s Flight
Runes to My Memory
Death in Fire
Deceiver of the Gods
First Kill
Fafner’s Gold
Crack the Sky
The Way of Vikings
Prediction of Warfare
Shield Wall
Guardians of Asgaard
Raise Your Horns
Encore:
The Pursuit of Vikings
Twilight of the Thunder God 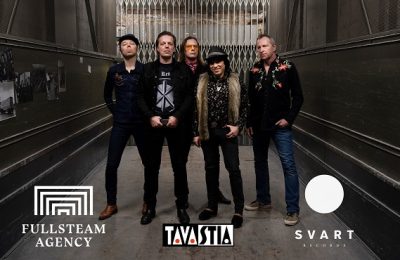