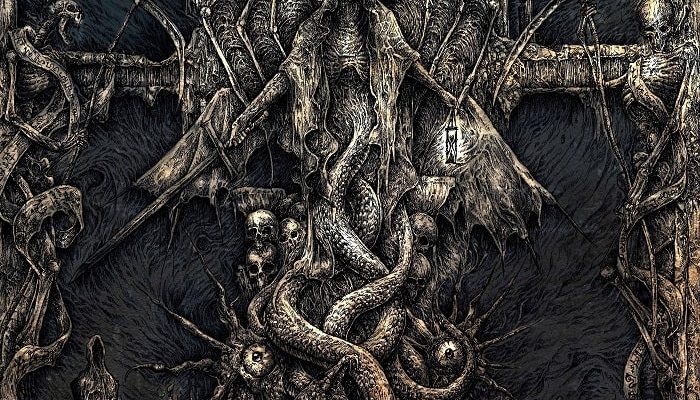 Brazilian death metal outfit Anarkhon was formed in 1999 by the founding members Wellington Backer (drums), Aron Romero (vocals). Since formation, they have released four albums, and two compilations. Although the band has progressed in the last twenty years, they have improved dramatically with the latest releases. The four-piece band includes members from the Brazilian black/thrash/speed metal band Power from Hell such as Jean Raimi (bass), and Kleber Hastur (guitarist). “Phantasmagorical Personification of the Death Temple” is the band’s fourth album and it was released last year via Soul Erazer Records on cd format. Recently, the French underground label Debemur Morti Production has released the album on the vinyl format.

At first glance at the album artwork, I was drawn to the grotesque details of the skeletal drawings. Anarkhon musical themes are seemingly influenced by the Lovecraftian stories. The music conjures a horrible atmosphere that plunges you into the deep abyss of space and darkness. The band navigates through the obscure old school death metal style that is akin to bands like Unaussprechlichen Kulten and old Mystifier. Along with the soaked cavernous growls, the guitars churn out slow atmospheric sensation, setting a cryptic tone for the music. Although the band’s approach to death metal isn’t quite similar to the new wave of old-school death metal, Anarkhon’s sound presents a grimy and primordial nature of the Latin-American style of death metal.

Bridging the cavernous brutality and atmosphere between the paces, the songs creep slowly from the deep void. The opening track “Dimensional Incantation” begins with a dark mysterious chattering, when suddenly the bludgeoning drums pick up the pace. The fourth album emphasis the atmospheric and horror soundscapes, other recipes that add some kind of creepiness to the music are the effect of the rhythm guitar and the drenched reverb vocals. “Phantasmagorical Personification of the Death Temple” slithers with spooky undertones and presents a familiar quality to the Lovecraftian style of death metal.

Its brooding mysteriousness serves as an atmospheric backdrop to the music. The album includes seven tracks balanced between the sporadic brutality. For example “Far Beyond Blood & Death” begins with a frantic drum pace with tremolos being utilized. The guitars produce some frightening undertones. The blast beats are often wielded though much of the focus. Here, that involves around the ghastly rhythm guitars. Within the thirty-nine minutes of duration, Anarkhon conveys creepy chills, the sinister tone of the vocals sounds like a roaring leviathan issuing from the cold depths of the abyss. In terms of atmosphere, the Brazilian four-piece has succeeded to portray a piece of vaguely creepy music. The songs on the album are twistedly exhibited. Therefore these elements have worked up nicely to form a tangible aura of darkness.

The melodic intro of the guitars on “Assuming the Grotesque Form of Nightmare”, is approached with a mid-pacing tempo. The drums ignite at a light speed tempo. Whilst the dense texture of the guitars and the vocals provides a thick atmosphere to the songs like “Ancient Tomb”. The track begins with a powerful double bass, although the slow pacing of the drums intersects with the dense guitars. As the blazing guitars turn the intensity into hellfire, the album title track incandescent with molten riffs. Despite that brutality here, the album is somewhat balanced. Each instrument like the bass and the guitars contribute to the music.

The album closure “Poisoning the Air with Abysmal Presences” is displayed in the same manner, Anarkhon knows exactly when to raise and lower the pace. The rapid fury of the blast beats adds unfathomable brutality, albeit the effective and slow elements of the guitars on this track create a sensible occult feeling. Anarkhon on their latest album takes a primary approach to the occult and Lovecraftian death metal. “Phantasmagorical Personification of the Death Temple” is arguably the band’s best effort. Recommended for fans of Unaussprechlichen Kulten, and Nekrovault.