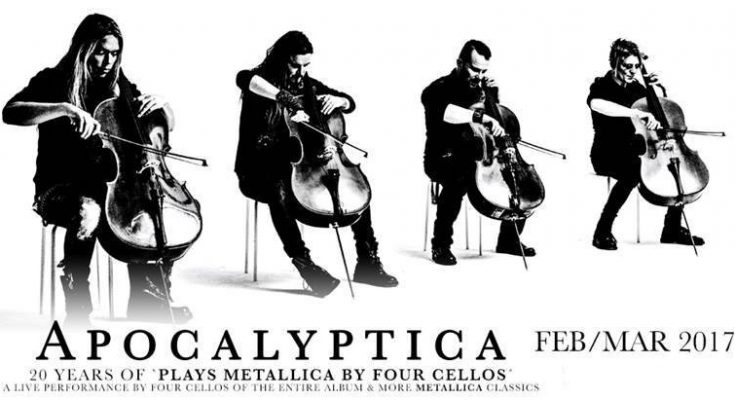 When we arrived at the beautiful Cirque Royal venue on a cold and very stormy Friday night at the end of February, there was already quite a crowd waiting at the doors, eager to see Apocalytica perform their legendary debut album Plays Metallica by Four Cellos’ live. 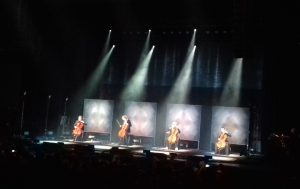 The four gentlemen of Apocalyptica (****1/2) entered the stage in almost complete darkness. When they started their set with Enter Sandman the scene was illuminated by only a few small spotlights. Then Master of Puppets, Harvester of Sorrow, and the other songs from Plays Metallica by Four Cellos followed. All these songs were very well executed. They sounded even better live than on record.

When Perttu Kivilaakso introduced his fellow band members to the audience, it became clear that original member Antero Manninnen, aka Mr. Cool (because he plays his cello very calmly and stoically, in comparison to the other guys who headbang and mindmill away), has rejoined the ranks. It had been eight years ago since he last toured with Apocalyptica.

The second part of the show was more up-tempo, mainly because Mikko Sirén and his massive drum kit were now present on stage. The songs were also a bit heavier: Fade to Black, For Whom the Bell Tolls, Battery … The guys really seemed to enjoy the show. They were teasing each other and cracking jokes to the crowd. Perttu, for example, said that he will be back next year with his brand new solo project, ‘Plays Helmut Lotti on One Cello’. To be honest, I would happily spend my money on that, haha. These guys are so talented that they would be able to pull that off without a problem.

Battery and Seek And Destroy were the last two songs. The band played them very energetically. By now the crowd was having a hard time to remain seated. It did not take long before everyone was standing and singing/shouting along the song lyrics. Apocalyptica gives the audience two more songs as “encore”: Nothing Else Matters and One. Hearing 2.000 people singing along those beautiful songs was quite moving. I’m sure a lot of people had goosebumps at that moment.

If you have the chance to see Apocalyptica live, don’t hesitate. Those guys are amazing musicians and entertainers. Not only their Metallica covers are really good, their original songs are also excellent. 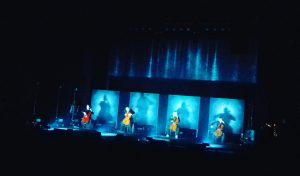 7. Wherever I May Roam

10. For Whom the Bell Tolls

Played on tape, while the band was leaving the stage