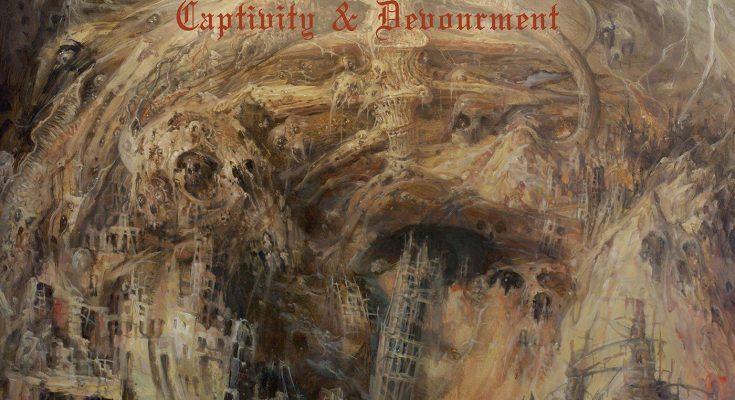 I was really excited when I heard Christopher Amott would release new Armageddon material. Not only is Captivity & Devourment the first Armageddon album in 13 years, it also promised to be a return to its melodic death metal roots!

Co-founder of Arch Enemy together with his brother Michael, Christopher Amott left the band in 2005 to return in 2007, and leaving it again in 2012. However, since the inception of Arch Enemy the younger Amott was also busy with this Armageddon side project. He released a very good melodic death album Crossing The Rubicon in 1997, but successor Embrace The Mystery (2000) showed a sudden change to a more power metal sound. On Armageddon’s last effort Three (2002) Christopher was even handling clean vocals himself. While these two latest albums contain musically brilliant riffs, I never got into the power metal-oriented vocals. On his two solo albums, Follow Your Heart (2010) and Impulses (2012), Amott experiments even further away from metal. Armageddon anno 2014 is based in the USA instead of Sweden and consists out of a fairly unknown line-up, with Amott the sole original member. He recruited vocalist Matt Hallquist, guitarist Joey Concepcion, bass player Sara Claudius and drummer Marton Veress. Let us see what the renewed Armageddon has released upon the world in 2015.

The album’s title track reminds me of the earlier work of Hearse, the melodeath project vocalist Johan Liiva was involved in after his departure from Arch Enemy. Hearse never reached large audiences, but it is their underground atmosphere that made several of their songs quite interesting. It is that same underground feeling that feels so pleasing on this record. Although both acts are further unrelated it is amusing to notice that Hearse’s second full length was entitled ‘Armageddon, Mon Amour’. “Locked In” features a similar old school vibe. You hear flares of older Arch Enemy with the melodic intermezzos that the Amott brothers are known for. Vocalist Hallquist doesn’t have a very distinguishable voice but displays the kind of raw vocals you encounter in more delightful underground melodic death bands. Not too memorable, but perfect when you are tired of the many commercialised sounds you encounter today. “Fugitive Dust” starts off with sci-fi keyboards sounds and a guitar vibrato riff. The slow build up and snarls of Hallquist remind of the mighty Carcass! A simple song with a recurring main riff, but very powerful. The fading sci-fi melody reminds me of the band’s Crossing The Rubicon album.

“Background Radiation” is an instrumental acoustic piece that flows from almost Latin inspired melodies into more dreamy arrangements. A standalone song that does not seem to fit in on the overall album. Yet again, this fits the underground feeling of the album. “Thanatron” starts off with some acoustic tunes before it unleashes its ferocity. The band already released a lyric video for us to enjoy.

After these raw melodeath tracks, the rest of the album sounds more like a blend between Armageddon’s power metal-inspired works Embrace The Mystery and Three, and the melodic death roots. “The Watcher” has a very captivating riff that returns a few times throughout the song. “Equalizer” gives me a huge déjà-vu feeling. It feels like a recollection of everything else that came before it on the album and makes the song feel almost redundant. Still, the orchestral background choir near the end of the song saves the track. Closer “Giants” sparsely uses vocals and lets the guitars do most of the talking. It combines stomping riffs with signature Amott leads and fades into his characteristic dramatic vibrato tune.

Captivity & Devourment represents Christopher Amott’s much welcomed return to an underground melodic death metal sound with some modern touches. A very pleasant listening experience for fans of the genre and a strong release for early 2015.