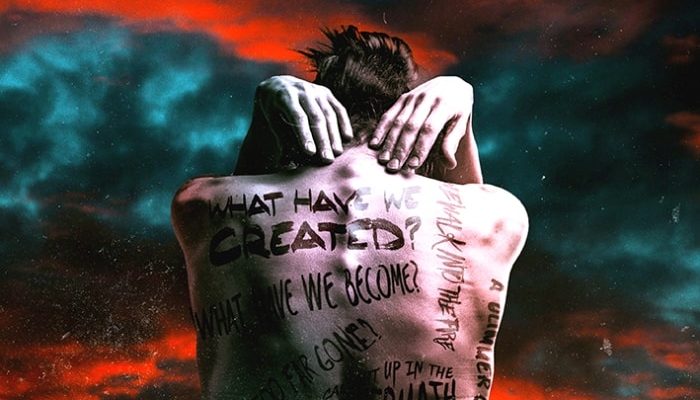 Recently the new UK-based hard rock band As Lions released their debut EP Aftermath. Firstly, some pointers to sort of place the band a bit for you: they’re basically what rose from the ashes of the now dead Rise to Remain. That band used to be sort of known as the project with Austin Dickinson (yes, the son of THAT Dickinson) on vocals. There were a lot of people nagging online about the band, sometimes even saying that talent apparently skipped a generation. In that way I’m very curious if Austin and his friends will manage to shut up the nay-sayers with this first taste of things to come.

Their music might not be the most original stuff ever made, but it’s damn catchy and radio friendly. Austin‘s voice doesn’t seem to be of the same caliber as his dad’s, but he can really carry what he’s trying to do here musically with As Lions. The first song and single of the EP is Aftermath and it’s a really nice hard and heavy rock song. I think these young guys could get quite big in the UK and possibly far beyond. Their style really fits in with all the modern rock and metal that has been released recently. Everything just seems to work perfectly well together with highs and more calm bridges and build ups to get a great song. Lyrically they’re asking “What have we created? What have we become?”. Questioning our society and the shit that is going on in wars, conflict situations and other problems on this little planet called earth. It’s really great to see that there are more and more young people in the music industry who don’t want to keep quiet anymore and speak up for people in trouble. What is even more awesome of these guys is this little line they dropped in the description of the Youtube video of the song:

Many children all over the world are caught up in the aftermath of war and disaster. There are a lot of great charities that help vulnerable children; here’s one of our favorites: https://support.unicef.org/campaign/d…

The rest of the EP is much in the same direction of style and themes. White Flags manages to pick up the energy even more with a groovy vibe. The higher vocals in combination with music that feels to be more on an epic scale towards the chorus remind me somewhat of the more recent work by Avenged Sevenfold. Looking at the huge amount of succes they’ve had, I’m wondering if As Lions possibly could be picked up by fans of A7X… They do have their own style still and bring a great message to their listeners to keep going whatever comes their way. Deathless picks up their worry about the empty digital world of likes and wanting recognition with another highly groovy track. Just when you think everything sounds the same, they crank out the piano and very vulnerable sounding vocals as the intro of World On Fire. Soon Austin opens up his longues wide to showcase his vocal capabilities. The song feels loaded with an urge to activate people and a need to change the world before it’s actually on fire. A really great rock track that makes a perfect blend of melody on different levels ranging from soft and breakable to loud and powerful.

As Lions is definitely a band to keep your eyes and ears on if you’re into melodic hard/heavy rock with a lot of passion woven through it. I can imagine that fans of Avenged Sevenfold and the lot could really dig these youngsters from the UK. The Aftermath EP is a great little taste of what is to come on their debut full release Selfish Age (to be in store by February 20th, 2016). If there’s one remark to make, it’s that it’s maybe not the most original kind of music and it all sounds very similar. On the other hand it’s very powerful, soulful and emotional stuff and what an intense album cover! I’m looking forward if they have any surprises waiting for us in the beginning of next year. 7,5/10 for trying to talk a bit of conscience back into our messed up world!