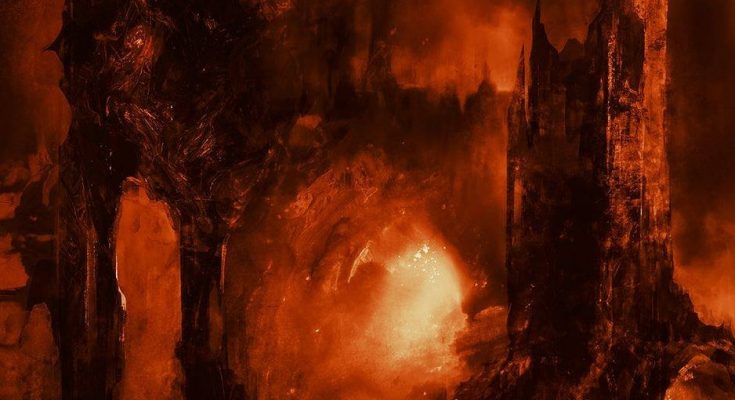 In the history of black metal music the first all-female black metal outfit was Astarte from Greece. And while it’s uncommon to find a full female band that plays black metal in our contemporary times, this makes Asagraum an exceptional example. The Dutch blackened outfit was originally formed in the year 2015 by the duo Obscura (vocalist, bassist and guitarist) and drummer Trish.

Asagraum released a stellar debut album Potestas Magicum Diaboli in 2017 and received a vast appreciation from the underground metal community. Now after two years of releasing their first full-length album they return with a new lineup which includes bassist Mortifero, guitarist V-Kaos, keyboardist Lady Kaos and drummer A. of Sisters of Suffocation. Dawn of Infinite Fire is a true reminiscence of the early Scandinavian black metal a la Gorgoroth, Bathory and Dark Funeral.

The sophomore is an amalgamation of aggressive compounds of thrashing black metal. The strength of the new songs comes from the blistering tremolo pickings, blazing solos, melodic leads and the demonic rasps of Obscura. By the boisterous and the heavy concentration on hellfire riffage and thrashing percussion, Asagraum manifests a solid cohesion. Spewing forth dissonance and sonic intensity that erupts with force and vehemence. It is out of exaggeration to state that the band has increased the diversity on the latest material. The fluent musical performance of the Dutch outfit in predominating the aesthetics of the second wave of black metal is professionally crafted.

Album opener They Crawl from the Broken Circle is a raging inferno of blackened growls and blazing riffs where Asagraum conjures the Scandinavian style of black metal by weaving icy melodies into the song structure. The mind blowing energy they possess comes from the fluent brutality of the fast tempos and the slow gripping moments created by the guitars. The band hasn’t refrained from using symphonic elements. In most of the tracks the aspiration towards brutality is quite explicit from the powerful impact of the drums in implementing ultra-blast beats.

The Lightless Inferno is only a mere illustration of the drums providing a rapid tempo and between these boisterous moments you can hear the tremolo pickings creating an infernal atmosphere. The thrashing entry of the third track Abomination’s Altar is carried straight forward through full throttle of blast beats. Though the band sprinkles the melodies to enhance the quality, there are plenty of dark moments within each of the new tracks. Asagraum on their sophomore depicts the raw and the infernal characteristics of the second wave of black metal and they do it with such passion and dexterity.

With the guitar blasting riffs and the menacing growls that sound malefic and evil. Guahaihouque includes melodic elements that suddenly overflow in the mid tempo and amidst the pervading tone of the guitar solos the swelling atmosphere of the black metal majesty dominates. The sophomore is full of evil rasps that will bring the chills down your spine. Asagraum impose a unique methodical approach to their music. Dochters van de Zvarte Vlam is soaked in dark atmospherics of the Nordic black metal and it’s another perfect track.

The profound aspect of the sophomore comes from the deep and natural ferocity in expanding beyond the debut album. The general sound has maximized a hundred times, the display of the true black metal is presented through the erupting blast beats and subdued melodies. The spine tingling melodies in the beginning of the track Beyond the Black Vortex is absolute magic and proves how Asagraum can attain their style so fluently. Despite of the great performance here the album isn’t quite flawless there are a few tracks on the album which have a similar tone to each other.

The transformation of the thrilling moments of the mentioned song is intertwined with the icy leads and tremolo pickings backed by blistering blast beats. Hate of Satan’s Hammer is carried out by thrashing percussion and sharp barbed wired riffs. The notable elements of punk black metal draws a comparison to early Carpathian Forest and DarkThrone. Waar ik ben komt de Dood is a satanic ode executed by ominous chants, blast beats and heavy blackened riffs. The atmosphere becomes somewhat obscure due to the chanting and soaring lead guitar. Asagraum has portrayed the authenticity of the Nordic black metal style of the 90’s era, ​the sophomore is an excellent follow -up to the debut, Dawn Of Infinite Fire is brought by fresh traits and outstanding songwriting skills.