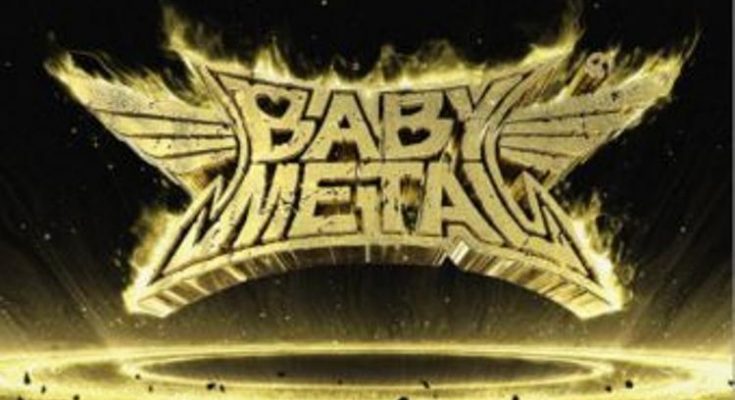 Aaah, BABYMETAL, the band you love to hate or in the case of many metalheads just hate. When they first surfaced with their crazy mix of powerful heavy metal and catchy J-pop many thought it to be just a weird Japanese gimmick that went viral for a bit. With the teenage girls in their gothic inspired school uniforms, over the top shows with choreographed dances and moves backed with electronically infused heavy metal it sure brought up a lot of controversy in the metal scene. For those who thought the whole thing wasn’t going to last long, you’re very much wrong. BABYMETAL are here with their 2nd release Metal Resistance and are ready to prove the haters wrong. Even for the fans of the heavier side of music that actually like BABYMETAL after their first release, the pure wackiness that they bring is often rather confusing. I have to admit that they’re somewhat a guilty pleasure of mine, their style is never going to be my upmost favorite, but damn! They’re fun!

The question here is of course if the gimmick is going to continue to work or if it’s getting old news and boring. The answer here is yes and no, in the same order. With opener Road Of Resistance they clearly wanna shut up the haters with a nice piece of excruciating power and speed metal. Fans of for instance Dragonforce will most definitely like the music (not that big of a surprise since Herman Li and Sam Totman provided some of the guitar work) and if they’re not too bothered with the girly voices, they can really rock out here. In a way this shouldn’t be too big of an issue since the singers of Dragonforce sing even higher than any of the BABYMETAL girls. One thing that I immediately noticed, is that Su-metal, Yuimetal and Moametal got way stronger vocally compared to a few years ago. They don’t sound as childish anymore as before and that’s a good thing. They actually manage to surprise me quite often with every other song, there’s a lot of variation to be found this time around, vocally and musically. KARATE sounds as heavy as a Korn song, GJ! got a hint of djent infused in the mix and YAVA! even here and there gives a bit of a ska vibe. One of the nicest surprises for me was Meta Taro though, where they dug up a hurdy-gurdy and actually made me think of Eluveitie. Another eye catcher is Tales of The Destinies in which they let the musicians do what they want and thus delivered a progressive song in the veins of Dream Theater and Devin Townsend. The tempo changes are nuts and sometimes even hard to keep track off, but still a damn good song.

Actually overall, the band seems to have matured quite a bit since their debut. Some of the lyrics actually make sense and are more serious like in KARATE (about overcoming struggles in life) or Sis. Anger (about phony guys). On the other hand there’s again absolute craziness like in Awadama Fever where they’re singing about magic bubblegum that can make you fly and travel through time. I don’t think we’ll ever get rid of totally bonkers stuff like that, but I gladly take it looking at the other high quality shit I get in exchange.

BABYMETAL is here to stay and will probably keep on growing. I suspect that they’re going to convince a few doubters with Metal Resistance and that they’ll be working on their evil plan to entice every metalhead and pop fan to go along in their craze. I really enjoyed this record, just like I enjoy some candy every now and then: I know it isn’t of the highest quality but who gives a damn?! 7,5/10 for the girls and their fox god.