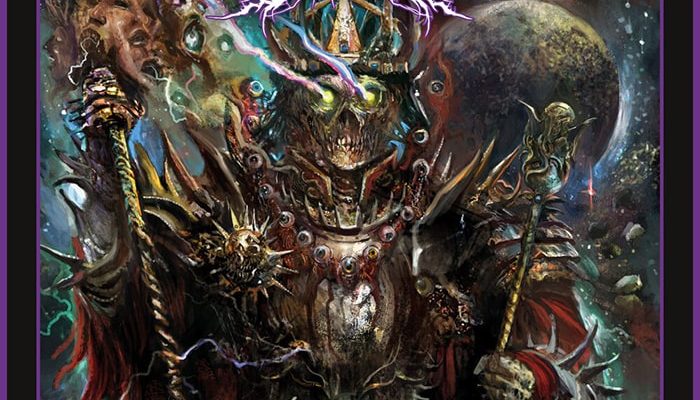 Over the last few years, the Danish death metal act Baest has been delivering the kind of quality that makes them stick out in and even outside of the genre of death metal. In the span of six years, these Danes proved to be a real tier in the modern era of death metal. Two years after their sophomore release “Venenum”, the band returns to drop off a massive fireball of nine heavy death metal tracks. By taking the influences from the Swedish and American death metal style, the quintet continues to develop their sound. While some of you might have expected a straightforward approach to brutality, the newest effort doesn’t continue from where the previous album left off. In fact, “Necro Sapiens” avoids the impetuous blast beats yet at the same time the guitars blaze through superb technique and groove.

The impressive melodic intro of the opening track “Genesis” surges with powerful chugs of the dual guitars. The monstrous growls of vocalist Simon Olsen sound incredible again, the bludgeoning drum attacks of Sebastian Abildsten provide superb drum fills and the solid mechanism of their performance has never been better. Their latest effort doesn’t only expand musically but it also feels well balanced. The guitars are measured by HM-2 distortion with the songs bouncing back and forth to settle on constructive mid-tempo.

“Necro Sapiens“ opens with a grinding double bass and the tremendous emphasis on tremolo chords leads to an aggressive shift in tempo. Baest remarkably applies the traditional elements of the Swedish death metal yet the guitars churn out modern styled riffs with catchy melodies. The guitars oozes with incendiary riffs and songs such as “Czar” and “Abattoir” are provocatively loud and brutal. The rhythm sections are very well structured as they bring many variations to the music. “Czar” suddenly shifts to a slower pace that seem to be dominated by the bludgeoning drums. From the occasional breakdowns to unrelenting brutality, the band indicates a stronger and more complex composition. When the pace becomes faster, guitarists Lasse Revsbech and Svend Karlsson tackle the American style of death metal riffs. And when “Abattoir” kicks in with a drum solo, the band shows its overt influences from Bloodbath. This track showcases the technical patterns of the guitars and drums professionally coating the melodies.

The drums on “Goregasm” make a great intro to the song and seamlessly feature some killer riffs with the heavy bass of Mattias Melchiorsen adding another layer. Baest seems to ripen the lessons from the old school death metal bands by realizing that playing death metal doesn’t necessarily require excessive use of blast beats. And I must say that am rather pleased by this new approach which sets excellent progress in the maturity of the songwriting. It’s clear that the band has honed their skills. Songs such as  “Towers of Suffocation” launch at a rapid pace with the galvanizing tone of guitars emitting blazing riffs. The track also features harmonized melodies that later became elevated by a frenzied solo. Other songs like “Purification Through Mutilation” initiate into a faster pace where the drums take their more violent and brutal attacks on the album. From the warlike riffs and the aggressive impulsion “Meathook Massacre” contains incendiary tremolo-picked riffs.

The guitars never abstain from unleashing hellfire fury, Baest simply raised the effect of the HM-2 without losing the momentum of the proficiency. Reaching the apex of technicality “Sea of Vomit” provides the amplified extremity of bouncing riffs that remains intense. “Necro Sapiens” is packed with powerful riffs, grooves, monstrous growls, and turbulent drum performance. Frankly, the premiered singles didn’t grab my attention as much I expected but after listening to the entire album, I must admit that I was wrong. Baest once again proves to be a force to be reckoned with.