Home Black Metal Band update to spice it up at Brutal Assault 2018: Laibach, Green Carnation, Pain of Salvation and much more! 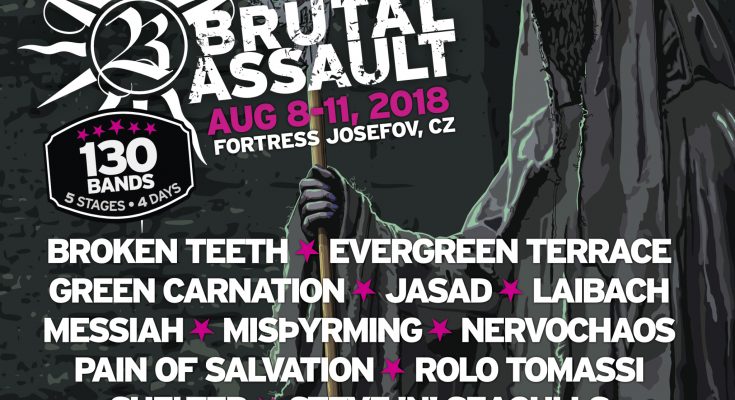 Band update to spice it up at Brutal Assault 2018: Laibach, Green Carnation, Pain of Salvation and much more!

This update of the festival line-up is made not just of your meat and potatoes bands you would generally expect from established metal festival as they were focusing on bringing in more exotic flavours that are not usually consumed by large crowds of metalheads… However they know that Brutal Assault fans are special and hence deserve some special spice! Enjoy!

Cult originators of retro-avant-garde LAIBACH are making one of their ultra-rare festival appearances at this years’ BA! The retro-avant-garde of LAIBACH is an art form ranging from graphics, paintings, videos and installations, to concerts and performances, creatively questioning artistic ‘quotation’, appropriation, re-contextualisation, copyright and copy-left. Although starting out as both an art and music collective, LAIBACH became internationally renowned foremost on the music scene, particularly with their unique cover-versions and interpretations of hits by Queen, the Rolling Stones or Beatles.

GREEN CARNATION both precede and are a natural successor of the experimental/avant-garde trailblazers In the Woods… and since its namesake blossoms first appearance, peering from beneath the permafrost of Norway’s winter, each successive GREEN CARNATION album is a welcome sight in the dreary sameness of general scene and their set at BA 2018 will be musical sight not to miss.

The ultimate melodicity of the renowned Swedish progressives PAIN OF SALVATION may be even too sweet to swallow for general BA crowd, however the raw emotions cloaked in dark, progressive poly rhythms and challenging syncopation, brilliantly darkened keys and percussive muscle will serve as a diversification of blasting metal elements at this years BA.

Fans of alternative approaches towards both life and music can look forward for KrishnaCore mantras of positive drug-free attitude to life of the 90’s spawned by Ray Cappo’s project SHELTER. US based trouble-makers WISDOM IN CHAINS will kick some ass with their killer street rock mixed up with some heavy old school hardcore and Oi! while Manchester hardcore youngbloods BROKEN TEETH will do their big BA debut after stirring up the European underground intensively for the past two years.

Another fascinating hot spice for the lineup will be the experimental hardcore-based synth-driven technical mix of styles of ROLO TOMASSI, who are expressing themselves with loud, energetic vibrancy and intelligence that is not cloaked in any gimmickry, macho posturing or stupid imagery while from the opposite side of the hardcore spectrum we will have EVERGREEN TERRACE, who trail their own path with their powerful combination of melodic hardcore and punk-rock strains.

Swiss pioneers MESSIAH quickly acquired a sworn fan base in the 80’s underground, however the band has dissolved due individualism of the respective band members. However, the timeless thrashing madness has never been forgotten by the loyal fan base and after 14 years of silence since the brief reanimation in 2003 MESSIAH are now back and will take BA by storm!

Iceland has spawned many of the contemporary black metal finest acts and this small indigenous but prolific scene is sending ambassadors from MISÞYRMING, yet the Icelandic domination over the avant garde dark music scene of Europe might be disputed by ULSECT. ULSECT are born of collaboration between Dodecahedron and Textures members and their music shifts from dense death metal dissonance to translucent avant-garde atmosphere.

NERVOCHAOS were established in São Paulo in 1996 and have been spawning aggressive and chaotic music shredding the barriers of death metal and hard core ever since while touring the world and this year they will debut our festival! Even more exotic in their origin and dedicated to sheer musical brutality are progenitors of Indonesian BDM scene JASAD, who will torture European sickos for the first time ever!

Last but not least, get ready for one truly party experience with STEVE ‘N’ SEAGULLS, undoubtedly one-of-a-kind band from Finland playing bluegrass versions of notoriously known metal classics. Have you ever dance at BA listening to aggro country versions of Iron Maiden?