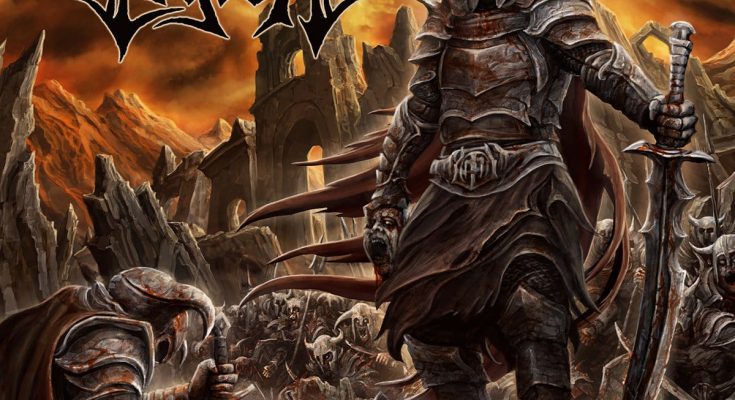 Berzerker Legion is an international super group that brings together members from famous bands such as vocalist of Wombbath, Johnny Pettersson, Alwin Zur of Asphyx and Tomas Elofsson of Hypocrisy on guitars, James Stewart of Vader on drums and finally Fredrick Isaksson of Dark Funeral on bass guitar. The name of the band was extracted from Germanic and Old Norse history. The Viking berserkers were furious fighters who wore wolf skins and worshipped Odin and induced wild mushrooms to fight in a trance-like fury. Musically the quintet of veterans combines superb qualities of melodic death metal.

‘Obliterate the Weak‘ showcases the talents of these musicians. The songs are driven with heavy grooves and melodies. The short intro ‘Rise of the Berzerkers‘ prepares the listener for a heavy barrage of riffs, before the loud blast of powerful melodies and aggression fuels the tempo on the following track ‘A World in Despair‘. The emphasis immediately shifts towards the propensity of Swedish melodeath. With the violent sense of groove and fused melodies, the international outfit mixes strong rhythm guitars altogether. The outstanding work of the twin guitars in bringing the quality of the musicianship is what makes the album so catchy.

‘I Am The Legion‘ is brought by the powerful riffs and roaring growls of Johnny Pettersson. Berzerker Legion is the epitome of what modern death metal is all about. The album is a concoction of epic melodies, powerful grooves, and intensity, merging influences from Hypocrisy, Amon Amarth and At the Gates in one deadly combo attack. ‘Obliterate the Weak’ feels like a mixed brew of energy drinks. The songs resonate with potent lead guitars and melodies. The album features many highlights such as ‘Of Blood and Ash‘, which provides the aggression of Amon Amarth. The drums are equally mighty and strike heavily.

Rumbling sounds of double bass to memorable moments of epic lead guitars are brilliantly executed, and the rapid flow of the melodic tremolos adds an epic effect to this song. Berzerker Legion offers a remarkable amount of energy. There are tracks such as ‘Obliterate the Weak‘ that reflect on strong melodies. The explicit influences of Hypocrisy resonate powerfully from the aspects of epic melodies. Alwin Zur and Tomas Elofsson write catchy melodies with such enthusiasm, the band drops one bomb after another. Most tracks are fixed in mid-tempo, which is why the thunderous melodies resonate with the striking drums.

Guitars combine catchy rhythm and tremolos, even the main riff is deadly and infectious. The right amount of aggression in each track is meticulously measured and guitars are professionally layered. The continuous flow of energetic riffs along with the massive drums on ‘The Falling Dawn‘ embodies the brutality of modern death metal. The album is absurdly captivating and full of hellfire riffs. Despite the description here ‘Obliterate the Weak‘ precisely defines the modern sound of Swedish melodic death metal, and it’s technically within a high range of quality.

‘The King of All Masters‘ is dominated by deep growls and epic melodies of the twin guitars. As if the band depicts the heroic battles of the Vikings, Berzerker Legion is able to provide many hooks and heavy riffs. On the final tracks such as ‘Upon the Throne of Mortem‘ and ‘A Lurking Evil‘, you can sense the overwhelming rumbling of the riffs empowering the song.

Whilst ‘A Lurking Evil‘ is loaded with aggression and double bass drums, guitars do wonders at mid pacing tempos. Album closer ‘In The Name of the Father‘ is a riff machine built on intense grooves and pacing drums. The track maintains a blazing tempo while bludgeoning drums and unstoppable grooves carry on till its final moments. For a band that features members of Hypocrisy, Dark Funeral, Wombbath, Vader and Asphyx you should prepare for a merciless assault.

The members do an outstanding job of capturing modern death metal. Although it may be a bit surprising why the band has chosen to encapsulate some clichés. Nevertheless, ‘Obliterate the Weak‘ is quite solid and refreshing, especially for those who enjoyed Hypocrisy‘s past albums, ‘The Final Chapter‘ and ‘A Taste of Extreme Divinity‘ especially.