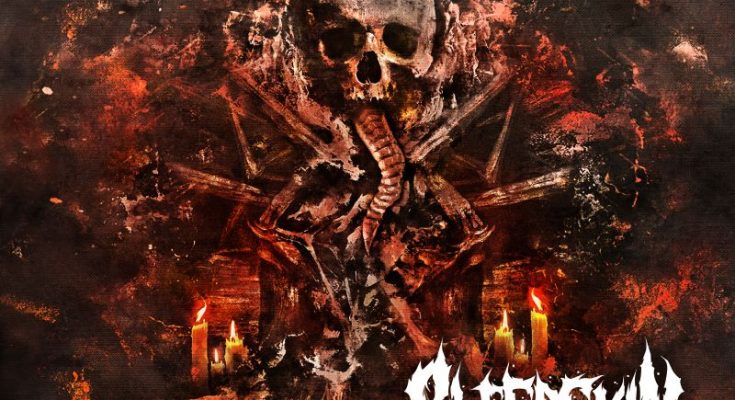 It’s that time of the month again, girls and boys: Benelux Music Appreciation Day. A day on which we celebrate the absolute worst, the positively average and the very best Belgium, the Netherlands and our little neighbour Luxembourg have to offer in the music department. We’re of course hoping for the best, but you never know what might happen…

Today I opted for a homegrown (Belgian, fyi) release by BleedSkin. The death metal quintet, the members of which hail from several parts of Wallonia, only boasted a well-received 2018 EP as of yet. But they’re at last about to drop their first full-length: ‘Blood Reign‘. I’ve been waiting for this album ever since it was first announced on social media and, being lucky enough to have befriended the lead singer of the band a while back, she most graciously agreed to send it to me for review. The record is due for independent release on October 2nd. So mark you calendars and be sure to show your support when it’s out, if you haven’t already done so by taking part in their fundraiser campaign for the album’s production.

I like a great deal that’s happening on this record. First and foremost, great riffs are plentiful. Guitarists Céline and Benjamin create an excellent balance between brutality and grooviness. ‘Blood Reign‘ is indeed a bloody groovy record. Tracks like ‘Perversion Of Mankind‘ or ‘Innocent‘ have some passages that will make you bang your head like you don’t care your pension fund won’t cover your back surgery when you’re 80. Furthermore the album is filled to the brim with memorable moments like the awesome finger taps on ‘No One Can Hear You‘ or ‘The Dead Sale‘, or the great guitar solo work on ‘Silence Is Your Only Way‘ and ‘Innocent‘. Even the wah-wahs on ‘Schizophrenia‘ are pure gold. Furthermore, listeners looking for Rémy‘s bass tracks will find them easily during breakdowns and more melodic riffs, as a nice way of giving the latter more texture and smoothing out the former’s rougher edges.

Singer Anouk has quite an impressive growl to top off the music. And she isn’t afraid of alternating between the deeper, more demonic grunts and the higher screams which give more power to the right segments. She sounds particularly furious on ‘The Dead Sale‘, which coincidentally happens to be my favourite song on the album. I couldn’t help but notice a few moments where she sounds short of breath but otherwise, good job.

Some elements I enjoyed much less. When you imagine how heavy and brutal the songs are, it’s difficult to wrap your head around the choice of the intro, which ultimately falls flat. I think they wanted to go for a symphonic instrumental track that would give the listener a sense of epic. Instead we go questing in a 90s dungeon crawler exploring the ruins of an old cursed fort along to kitschy synth. It sounds a bit cheap and doesn’t quite fit ‘Blood Reign‘s tone.

I also have a small beef with the drumming on the album. Drummer Julien delivers an overall solid performance but his licks aren’t always as tight as you’d want them to be. And when a death metal drummer sometimes misses a hit or pedals off-rhythm, you instantly notice as it can quickly lead to chaos. As a consequence, some blast beats tend to sound a little sloppy. One example would be the song ‘Obsession‘. I’m told the drums were recorded with metronome, which unfortunately doesn’t really show. There are moments where he really shines, don’t get me wrong, but this is definitely an element that can be improved for future releases. Fills seem to be his stronger suit. He handles them well and they provide important variation among the pummeling, from which one will enjoy the occasional break.

Death metal fans should be pleased with this new offering. Sure, it’s got some issues here and there but it’s nothing that can’t be improved for later albums. Also keep in mind the band are producing the album independently, which is more often than not an admirably tough thing to do. Still, I believe you’re bound to get your money’s worth here, so why don’t you give ‘Blood Reign‘ a spin when it drops and enjoy BleedSkin‘s very first full-length record.