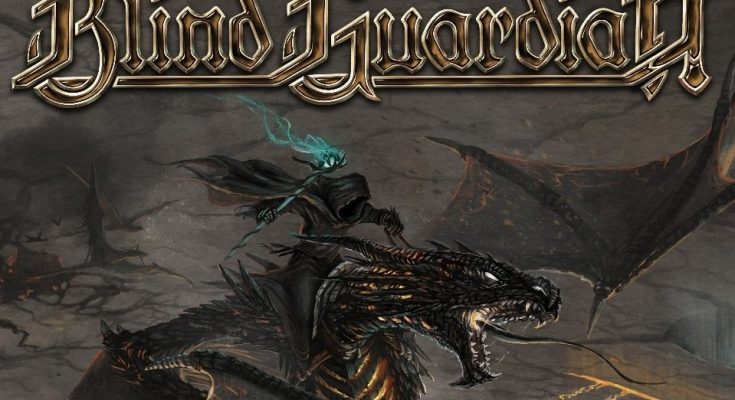 On the occasion of their 30th anniversary, power metal legends Blind Guardian surprise their fans with a new live album. Even if Live Beyond The Spheres contains no new material, there’s plenty of reasons to pick it up. I for one was curious to hear how the latest recording techniques captured the performance of musicians so renowned for their work ethic. Live Beyond The Spheres also offers an opportunity to reflect on the Germans’ most recent studio output. Indeed, every major live album released by Blind Guardian ended a stage in their career. In 1993, Tokyo Tales closed off their speed and power metal phase. The group’s 2003 live record then celebrated the maturation of their symphonic style, registered on such timeless outings as Imaginations from the Other Side and Nightfall in Middle-Earth. 2006 marked the beginning of the Nuclear Blast era, in which the band made efforts to modernize without losing their trademark sound. If you want to know how well records like A Twist in the Myth, At the Edge of Time and Beyond the Red Mirror stack up against Blind Guardian’s considerable legacy, Live Beyond the Spheres (LBTS) is your perfect companion.

Every proper live set begins with a majestic opener. In this department, Blind Guardian have a couple of songs to choose from. There’s the hammering classic Imaginations from the Other Side or the straight-shooting Into the Storm. On LBTS, however, both songs are ignominiously drowned in the middle of the bunch. The opening spotlight goes to the electro-bombast of The Ninth Wave instead. To be honest, I was never really impressed by this piece. Its verses try too hard to sound all “aggro” and modern, while the bouncy chorus kills the mood with overstated elation. Luckily, the symphonic splendour of Sacred Worlds has the honour of introducing the “encores” on the third disc. Of the two openers, the latter is vastly superior. Hansi sings more smoothly and with additional conviction, making you believe there is indeed something “sacred” about his performance.

Two very different kind of tracks make up the backbone of LBTS. The first category are the high-speed cookers like Banish from Sanctuary, The Last Candle and Lost in the Twilight Hall. Thanks to the crispy rhythm guitars, these classics sound all the more exiting. The relatively recent Tanelorn fits nicely into this series. If you sometimes get the impression that Hansi is holding back in the vocal department, he really sings full-bore here. Equally important to any Blind Guardian setlist are the soulful ballads. On these tracks, the presence of a live audience is a definite advantage. Just listen how intimate songs like The Lord of Rings and A Past and Future Secret are transformed into magical singalongs. The Italians chanting on Nightfall are really something special, as if they were attending a football match between Morgoth and the Noldor.

In between these musical extremes, we find Blind Guardian’s other compositions. Some of them are punchy rockers like Fly or Twilight of the Gods. Rather good songs, but they will never be my favourites. I’d wish Blind Guardian brought back Otherland to their live set. That was perhaps the best track on the slightly uneven A Twist in the Myth. Past all the peaks and valleys, we make our way to the apex of Mount Guardian. And Then There Was Silence is an absolute monument, featuring some catchy bass playing by Barend Courbois. I really hope Hansi and co will give this Dutchman more places to shine on future albums. Another highlight is the Eastern-tinged Wheel of Time. Throughout LBTS, it struck me how strong the songs from At the Edge of Time come across. I think they can now be regarded as an essential part of the band’s legacy. Unfortunately, the same thing cannot be said about the newfangled compositions from Beyond the Red Mirror. Even a decent track such as Prophecies sounds humble in the presence of the classics. Maybe we have to wait a few years to make a final assessment.

If LBTS proves one thing, it is that Blind Guardian will never be a band to rest on their laurels. 22 energetic live tracks show these Germans are still making music with as much passion and integrity as they did 3 decades ago. Granted, they have lost some of the power and intensity of their youth. But in their place have come mature songwriting and a real devotion to craft. It may sound optimistic, but I’m certainly looking forward to the next 30 years.