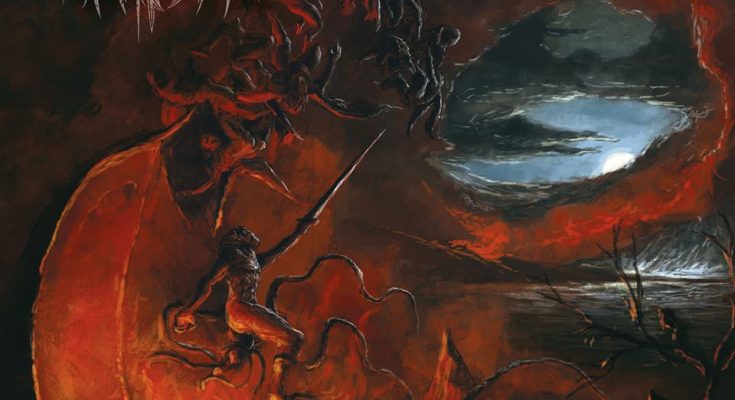 Sweden is a goldmine of metal music when it comes to both black and death metal. In the past the Swedish bands have produced some of the best quality music in the mentioned genre. Many fans are feeling nostalgic as they remember the old days of lore and hold the flame in their hearts. But Sweden’s Blood of Serpents who made their first formal introduction in the year 2013 may appease those who yearn for some unrelenting and pure black metal. Hailing from Samaland, this five piece band is aiming high with their sophomore album Sulphur Sovereign.

Sulphur Sovereign is their newest output to date with the line-up featuring vocalist Thomas Clifford of Abscession and Throne of Heresy. Blood of Serpents represents the truest form of Swedish black metal, filled with purity and frenetic blast beats. Those who miss the old Dark Funeral and Marduk will find this album pretty amusing. And right from the beginning the band showcase with their heavy artillery and fire cannons of hell.

The first track Mater Tenebris is carried with infernal black metal styled of tremolo picked riffs which share similarities to early Setherial albums. In Darkness, Brotherhood is padded with ultra-blast beats while the guitars blaze with fiery riffs. The production is excellent as all the instruments sound clear, the drums have a louder and clamorous sound acting as a strong instrument. I certainly have not encountered any band with such energy and power. Many musical groups nowadays intent to add creativity to their music when it comes to black metal, but the second wave still remains authentic and influential to newer acts.

Devil’s Tongue is sprawled with the black wings of darkness followed by venomous vocals and they are very symmetrical with this kind of black metal. The drums in other hand acts like machine gun, this is absolutely a destructive and frenzied opus of hellish impurity. there is a sense of overwhelming darkness surrounding this track and the twist of modernity with old school is very well mingled. The untamed brutality is excessively propelled by the unstoppable blast beats, and the tremolo picking riffs are applied with intensity and speed.

As The Temple Burns is another stellar track brought to you by engaging into a slower tempo, the guitars on this track are overwhelmingly catchy and rhythmic. However the track grows more obscure when the male choral interacts later. As Nocturnal Dimensions Beckon is steered into hellish tides and will suck you deep into the maelstrom. Blood of Serpents are true revivalist when it comes to the Swedish black metal and with this album they have joined the infernal horde of evil. The band can basically offer more than the rapid blast beats , Prophet of a False Faith is a fantastic mid tempo track full of evil riffs.

Vocalist Thomas Clifford fulfills his role and has great vocal ability, the music itself is saturated with so much violence and hate. The final track A Void between Worlds erupts with continuous blast beats and contains pure and fast tremolo pickings. Despite the lesser variation in music their latest material is well executed and has one facet, most of the tracks here are unvarying in direction sticking to old school sound.

The band is basically devoted to the second wave of black metal but has managed to replicate the style of early Dark Funeral and Setherial with proficiency. The album somehow lacks in variation and has a limited scope when it comes to the musical offering but nevertheless,  Sulphur Sovereign is mastered by sharp riffs and it’s sacrilegiously brutal and extremely evil.