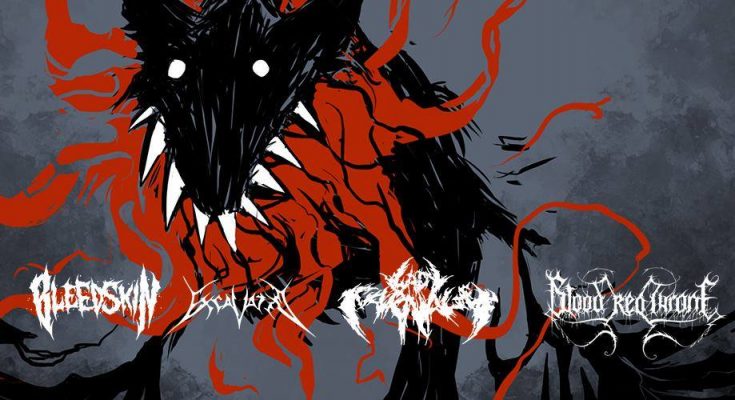 As much as I love big venues boasting A-grade bands that play in front of massive, raging audiences, the underground is my much preferred abode. It is often a place for the laughably bad and the exquisitely mediocre, whether we’re talking bands, audience, bookers, or journalists. Hey, present company not excluded. But it has more than once been a place of wonderous admiration. Tonight was such a night.

Our little metal-infused soirée of January 4th, 2019 surprisingly started out with me and a guy I had never met before (cheers to Alain!) driving the Norwegians from the headlining band Blood Red Throne to the venue. A fun little extra for an easily starstruck fan boy such as myself. They were hoping to reach the venue using public transport and relying on a few good Belgian souls through social media. A gamble that  apparently paid off. Half the band went along with my newly made friend, whereas the drummer and guitarist hopped into my utility van along with their gear and luggage. On we went on our anecdotic ride to the biker-friendly MCP Apache venue in Fontaine-l’Evêque. I have been there on quite a few occasions now, and I am happy to say it is a place where the underground thrives.

The first band of the night, Bleedskin (***) from Andenne, must have been stoked because the venue had filled up nicely by the time they got their set going. It was however to be expected since for some reason they waited twenty minutes before starting. I have seen openers wait as long as could for a bigger audience, but here I didn’t really understand it since the audience had already grown sizeably by the time they were actually supposed to play. Anyway, a minor annoyance. Bleedskin put forward some good ol’ shredding old school death metal. Although the sound was fine, the vocals came out a little cardboardy. This often suits the genre so no harm done. The audience was rather static, but I noticed a few heads banging here and there. Towards the end of the set, a couple of people decided to give moshing a go. They played a quick encore to warm up the stage for the next band.

Lady Carnage (***) from Liège took forever to soundcheck, and unfortunately the vocals suffered due to the ongoing sound issues. Technical issues galore here as the PA-system crashed a couple of times before they could even launch their set. Luckily they didn’t sweat it and once the sound was on their side, Lady Carnage ripped. What you’ve got here is some The Black Dahlia Murder-style melodeath,which is always good in my book. The charismatic vocalist got the crowd moving and kept us entertained throughout the whole set. I sometimes wondered at the originality of the music, because I did get some TBDM and At The Gates déjà vu’s from time to time.

Now Excavated (***1/2) was more to my liking. Another really cool death metal band from Liège, the likes of Dying Fetus. Always a winner. The vocals didn’t really do it for me but to be fair, the vocalist is shredding it a the same time. A feat that never ceases to impress me. If you like your growls in the style of Obituary, then you’ll probably dig this, but they’re just not my cup of tea. The music however was right up my alley: fast and brutal death metal alternated with a little slamming. Excavated saved the best for last. They evidently ended their set with their four best tracks, which sounded heavy as hell. They even got me moving at some point with one hell of a breakdown.

Which brings us to the final band of the night. All the way from Kristiansand, Norway, Blood Red Throne (****) had come to destroy the venue from the inside out. And destroy it they did. With plenty of help from the audience. I was worried at first because the singer was so drunk he could hardly manage to speak coherent English just to crack a few jokes. But damn, was I glad to be proven wrong. Once they started playing, the sparks flew off the stage and the singer didn’t seem that wasted. He totally aced it. We were treated to some honest brutal death metal with some old school influences and deep slimy gutturals to boot! The crowd went fucking nuts, banging their heads as if they were loosely fixed to their bodies with extra greasy ball bearings, and moshing as if their very lives depended on it. Blood Red Throne came, drank and conquered.

All in all what you’d expect from a death metal-fueled night out in a backwater small-time venue. Not bad at all for my first show of 2019.