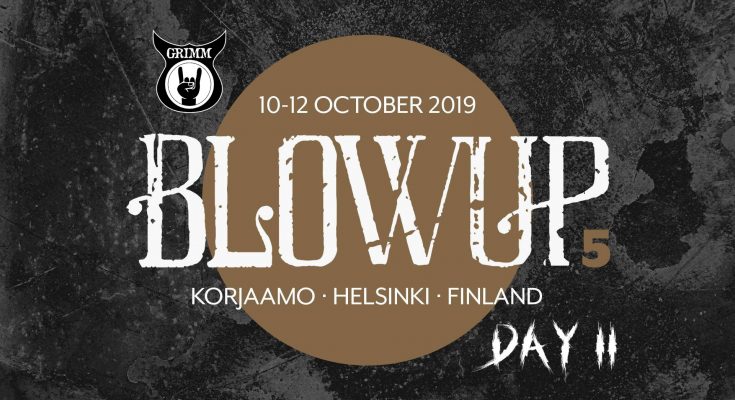 On the second day of the festival, another change to the festival got in action. Besides the main Tram Hall stage and smaller Corner Hall stage, they opened up a small bar area in the attic. Which included a small stage as well, the ideal surroundings for some highly interesting and intense performances, but more about that later…

The ones to baptize the new Attic stage, was the Finnish Kuolema Duo. The stage held a small piano, guitar and what looked like a little altar, fronted by blossomed branches over the whole width. When the 2 women took up their spots and started playing their music, we got steeped in highly melancholic folky music. A very pretty and haunting way to start a new day of art and music.

One of my discoveries of last year’s edition where they played the afterparty show of Blowup Vol.4 got invited for the main event this time. Finnish sludge heroes Demonic Death Judge absolutely killed it during their set and as usual besides the infectious energy of the band on stage, the visuals added another layer of atmosphere. I heard there were a couple of new songs in their setlist from the album they’re working on right now, all fitting in perfectly with the rest of the churning heavy music. Looking forward to that!

Time for some absolute legends on the stage! The heavy metal outfit Cirith Ungol is all about fantasy in the veins of sword and sorcery material and are seen as a prototype for doom/power metal as it is today. There was quite a gathering of fans right before they started, as soon as the curtains opened there was a rush forward and then the madness began! Hairs whipped, fists and horns got raised, beer flew around and voices shouted along to the songs at the top of their lungs. A simple old school heavy metal show with a raw energy that was undeniable. One of the better shows of the weekend through the sheer intensity.

To cool down a bit from the chaos that was Cirith Ungol, you could catch the rather eerie ambient and occult outfit Arktau Eos. 2 hooded figures reminiscent of scarecrows, combined electronica, samples, bells, rattlers, haunting shouts and ritualistic elements into an intriguing show. It’s definitely not the kind of music I would be playing in a daily basis, but in combination with the visual act it definitely grasped my attention.

What was playing in the Attic, was more my cup of tea. The Finnish Throat delivered an energetic set of noise rock with touches of grunge and sludge metal. While the other guitarist and bassist were a bit hidden in de darkness of the stage, main vocalist and guitarist Jukka stood in the center of attention. He had a stage presence you gravitated towards with his passionate rocking back and forward to the music and at times frantic shouting (almost swallowing the mic sometimes). A show I thoroughly enjoyed and a cool sort of local discovery.

The first time I saw the extreme metal outfit Bölzer, the sheer raw power blew me away. Seeing the duo again about a year later didn’t change much on that level. Whenever they start playing, a (blue) wall of sound washes over you, crushing you along the way. The at times wailing vocals from KzR are bone-chilling and it’s still damn impressive to hear the wave after wave of all devouring sound coming from just 2 guys. Damn!

Road To The Stars

Blowup is known to dare to do something different and to include other arts within their events. The ‘Road To The Stars‘ showing was one of those moments. In the smaller corner room they played an old soviet movie for which a soundtrack was written and performed live. When entering the room, you saw a bunch of people sit on the floor watching the movie and enjoying the music.

One of the most famous sludge bands coming from the NOLA scene, has to be Eyehategod. Apparently they like playing in Finland so much that they were set to play 2 nights in a row. Frontman Mike Hill is quite the character and brings a certain amount of energy to the stage that is simply infectious. Which translated in even more madness than we earlier experienced with Cirith Ungol. Frantic fans that threw themselves completely into the music. A groovy, bluesy and doomy night to remember it was!

Last band on the smaller corner stage, brought something completely different, but not less passionate and captivating. The French outfit Celeste combines black metal, sludge and post-metal into a mesmerizing sound. They’re also known for playing with a red light beaming off their heads. The atmospheric wall of sound in par with the visual aspect of the lights takes every performance of this band to another level. A band you simply have to see to believe its epicness.

Last but not least, the Attic stage was the setting for a last act under the form of NY-based White Ring. Their music has been branded as “witch house” and I can see where they get it from. The room was steeped in fog and red lights, the mostly house music with hauntingly beautiful and eerie vocals at the same time created an undeniable witchy atmosphere. After some songs with Kendra on vocals and Bryan at the mix table, they switched roles where Bryan frantically started shouting in the microphone. Another stellar performance that’ll stick with me for a while. 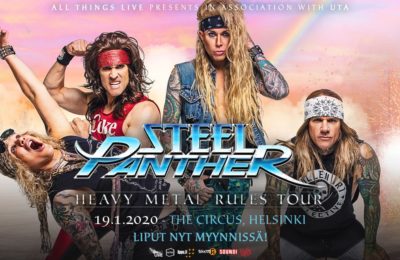 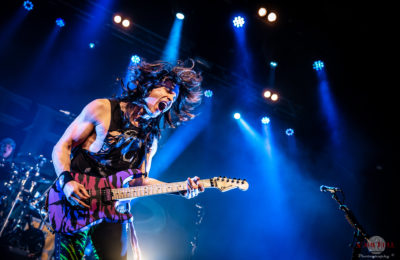