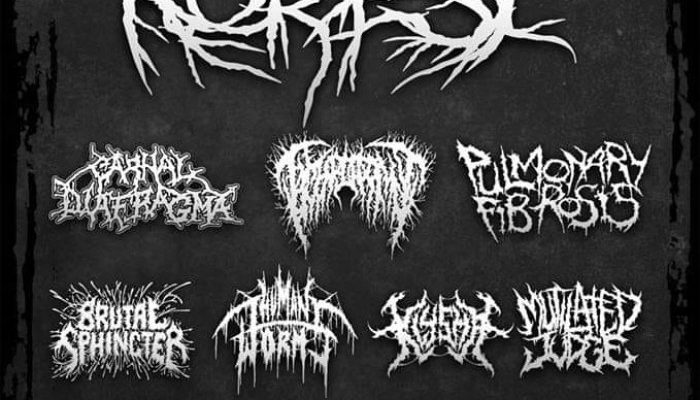 Fellow underground dwellers, I salute you! You may or may not be aware that small venues sporting local and/or relatively unknown bands are my much preferred abode. If you feel the same way, you’ll know that you and I are often the first in line to encounter new or hidden talent in the metal scene. The beauty about it is that you can find it almost anywhere. You just have to keep your ears and eyes peeled. I shall therefor recount another ‘Tale from the Underground’. Yes, I have decided I would adopt the concept and maybe turn it into a regular series. I go to shows at least once a week so it is not as if I were lacking source material. This time I found myself going to Le Garage, a tiny venue in Liège, for the third edition of Brutality over Belgium. It was the first edition I could attend, as the first one was unknown to me at the time and I missed the second in November last year because of conflicting schedules. This edition was a special one, since all the proceeds would go to a friend of the bookers who’d lost his house to a fire.

First up we have Mutilated Judge from Basque Country, Spain. This noisecore duo are insanely fun to watch. Grindcore in its most nihilistic form is what you get here. Literally on one hand because only the vocals and bass line are live; everything else is pre-recorded. On the other hand because of their “show”. They kick off their set, if you can even call it that, with a pre-recorded techno dance track, that instantly set the mood to hot and the IQ-level below zero. From there on the show grew increasingly weird and erratic. At first I thought something was wrong with the sound because all that came out of the speakers was white noise. After two or three tracks I realized the white noise didn’t actually matter as much as the performance itself. The audio was strangely in concordance with the visuals. Vocalist Gutcock did not hesitate to dress down and show off his Johnson, helicoptering from one part of the stage to the other. He dove off the stage and into the crowd, rolled around on the floor all while squealing into the mic, which I would have thrown away after the show’s conclusion. Indeed at one point he opened a can of ravioli and emptied it on himself, to the crowd’s horror because he threw himself on us covered in sauce. Bassist Babyrapist did not escape my attention as he too took off his clothes halfway the set and ground his bass guitar like a lunatic, often slamming it on the ground and into the crowd. I’m gonna go ahead and give this four stars out of five for sheer entertainment. Musically it’s noisecore at its finest. It’s a damn shame there’s no footage of that performance, because I would have gladly shared it.

Klysma is sort of an international band that includes members from Belgium (Liège) and Holland. They play slam death metal with parsimonious grindy passages, which grant the music a certain lightheartedness. The sound was not optimal, something that didn’t seem to bother the audience very much because they were all about the heaviness and the mosh pits. You don’t actually have the time to bother because the song lengths are quite short, which works in their favour. I also thought the breakdowns fell a little flat. However, nothing short of a good time here as the audience even got to crowdsurfing and performing a wall of death.

A fantastic goregrind show from these local celebrities as the place was the most packed and exploded the hardest. People dressing down, moshing, circle pitting and crowd surfing while Brutal Sphincter was slamming it home with grinding guitars and speedy blast beats. Both vocalists nail it with high pitch screams and low distorted grunts. Toilet paper galore here, since we’re talking goregrind. We TP-ed the place so bad, it might just as well have been a Gutalax gig. The front stage was so packed that yours truly even gave a go at stage diving. Be sure to pick up their latest album Analhu Akbar. Definitely one of last year’s better grindcore albums.

Now this French quartet bring to the already broken table a heavy mix of deathcore, slam death metal and beatdown hardcore. A few years ago I completely turned my back on the milked cow that deathcore had become, and did not touch it again until recently when I noticed the genre was being somewhat revived, but in a way that it is now very often mixed with other genres. Human Worms is a band that embodies that change. It’s also one of the reasons I like these guys. I had never heard of them before but they sound really promising. You’ve got your slamming blast beats, some hardcore two-step bits, and floor punching breakdowns. Turns out pig squeals haven’t died out just yet. As was to be expected, this was the gig where the pits hurt the most.

FFO: Chamber Of Malice, Thy Art Is Murder, etc.

Grindcore/noise, again from France, with an incredibly pissed off vocalist. He’s spewing some harsh and heavily distorted grunts that never failed to impress me. The energy during songs was incredible, whereas in between they seemed to just be chilling as if this were merely another rehearsal. An amusing contrast befitting the genre. These dudes sound truly heavy. They might just as well have been playing with two bassists because the guitar sounded as though it were tuned to an extremely low drop. We could all feel it in our stomachs. Pulmonary Fibrosis is named quite appropriately, by the way, as they play a sample of someone breathing heavily in between songs, apparently to some people’s annoyance. I heard from a friend they did the same at Deathfeast 2018 where they apparently incorporated the same sample to their set, but way too loudly. Toilet paper still flying, people still moshing, beers still spilling,… Man, these Walloons just don’t quit!

Hats off to Hymenotomy for coming all this way from Estonia. The brutal death metal trio wins the prize for the funniest and longest song titles of the night (or maybe ever). With songs like Voyeuristic pleasure of watching how a surgeon rapes a transvestite guy during vaginoplasty or Fat ladies use your anorexic body as a dildo to perform vaginal penetration on each other while you suffocate and cramp in their pussies to make for a better enjoyment they never fail to get the audience roaring with laughter. The performance was not as tight as I’d hoped and the sound was not optimal. The snare was inaudible. INAUDIBLE. That’s a big problem when you’re a blast beat-focused band. The bass being turned up so loudly, it drew out all other instruments and made it impossible for me to distinguish vocals and guitars. The sound got definitely better towards the end and the last four songs were much more enjoyable.

Czech grindcore veterans Carnal Diafragma have been around since the late nineties, but don’t you dare think they can’t still kick your ass. If you like your grindcore groovy like their Spanish colleagues from Haemorrhage, you will definitely dig this. Looks were also on point as the vocalist was rocking a Leatherface mask. Lots of that typical goregrind oompa-oompa going on which always triggers zombie circle pits. Here was no different. You’d think the crowd had grown tired but no way. Although it may have thinned somewhat, the atmos was still festive.

By the time the heaviest performance of the night started, two thirds of the audience were already drunk. This is only meant as a heads up for the vid below. Now tonight had been nothing but wild and heavy, but Dutch slam death metal ensemble Korpse were the titanium icing on the cake. We’re past the dirty whipped cream or gory biscuit smears on your face and have come to the pummeling of the platter on which it came. This is some aggressive shit. Vocalist Sven Van Dijk know how to pump up a crowd, requesting as much violence from us as possible. Although the crowd had grown a little tired by this point, Korpse would not have it. They definitely squeezed out the last bits of energy the crowd could muster and had the place explode for a final 50 minutes. Nothing special to mention here, just some good old brutal/slamming death metal brawl.

Another Saturday afternoon/night well-spent discovering bands and partying to some old favorites. If you too want to experience the fun and violence described above, you can! Brutality over Belgium‘s next edition will take place on April 22, 2019 at the MCP Apache venue in Charleroi. Get your info here.