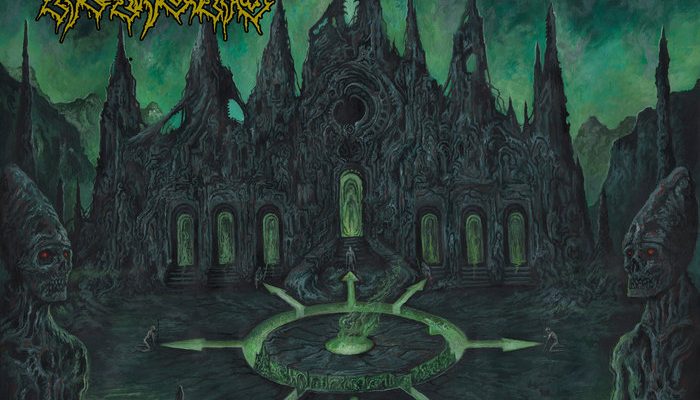 Last year the Dutch-based death metal act Burial Remains debuted its first album “Trinity of Deception” via Transcending Obscurity Records. The enthusiasm factor seems pretty high for the band as they return for the second time. Prior to the release of the sophomore album, Burial Remains signed a new deal with Raw Skull Recordz. To many, the band might sound traditional but in truth, their music breathes an air of freshness. The inspirational aspect of the Swedish death metal is seemingly drastic and fair. This gives the album a savage sound. While I did enjoy the band’s previous release, the Dutch quartet seems to relish on the old school Swedish death metal. The lineup includes active members from bands such as Dimæon, Grim Fate, ex-God Dethroned and etc… “Spawn of Chaos” consists of eight tracks plus one cover song of Slaughter. There are plenty of nuances of old Dismember and Grave and this provides unwavering pace to the songs.

Album opener “As Darkness Shall Reign” show these huge influences of the early Scandinavian death metal. With songs being materialized through the heavy rampage of the pulverizing drums and the HM-2 buzzing guitars. Giving the maturity of their songwriting skills, Burial Remains unleash some jaw-dropping and catchy rhythm and lead guitars. When compared to the debut release you can say that the band gradually progressed in the musicianship.

However when the following track “Where Death Begins” kicked in, they prove that they’re not just mere trends. Burial Remains gives us a clear perspective of the way they merge melodies with the savage elements of old school death metal. The change mainly comes in the length of the tracks. The guitars provide solid dynamic riffing. The absolute power mainly comes from the guitar distortion and the hammering drums. The album production is a bit muddy. There is also an emphasis upon the dual guitars. These primary areas have been fortified by precise drumming beats. This remarkable evolution in the handling of the instrumentation is brought to full intensity.

“Spawn of Chaos” feels more accomplished and less polished than other Swedish death metal bands like Entrails. Musically the album offers a dynamic balance between the melodies and the oppressed savagery of the Swedish 90’s death metal. Each track transforms into captivating performance songs like “At Dawn Came the Shadows” draws some comparison to old Grave and Dismember. Striking out at full force, the hammering drums and the sharp honing guitar riffs showcase the old school technique. Burial Remains is more than capable to attract the attention of the fans. They know when to slow down the pace and when to increase it. There are some fine tracks that show the potential of this supergroup. Blasting into the frenetic tempo “Slaves to the Cult” begins fast. The rotten growls and buzzing guitar riffs give the song a putrid vibe. The Dutch quartet exudes enough energy. The heavy roar of the vocals upsurge in a violent tone. “Spawn of Chaos” is packed full of upbeat heavy riffs. Each song builds slowly and contains many guitar hooks.

“The Spear of Destiny” is empowered by heavy grooves. The track gears to some heavy tempo. The solid embodiment of the Swedish death metal is pushed to newer boundaries this time. The one thing that separates the songs from each other, is the factor of the unpredictability and while the album is characterized by the heavy guitar rampage, Burial Remains molds their melodies in a very unique way. These kinds of melodies and hooks are somehow similar to Revel in Flesh. “Swallowed by Sulphur” is a total bloodbath. The upbeat tempo escalates into a rapid pace with drums bursting into an attack. I really find it amusing how the band has evolved and while it is also fair to say that they have cemented their own unique sound.

With other prime elements of the Swedish death metal, there is also notable use of the D-beat technique and catchy melodies added in the slow tempos. The absolute power mainly comes from the guitar distortion and the hammering drums. “Spawn of Chaos” is definitely a banger. The album is mixed and mastered by Johnny Pettersson (Wombbath, Heads for the Dead, Nattravnen, Henry Kane). In less than five years Burial Remains proved that they are among the modern disciples of the Swedish old school death metal. The sophomore may not be original but the band has proven to be one of the promising acts that carry the old school inspiration. Recommend for fans of Grave, Dismember, and Entombed.