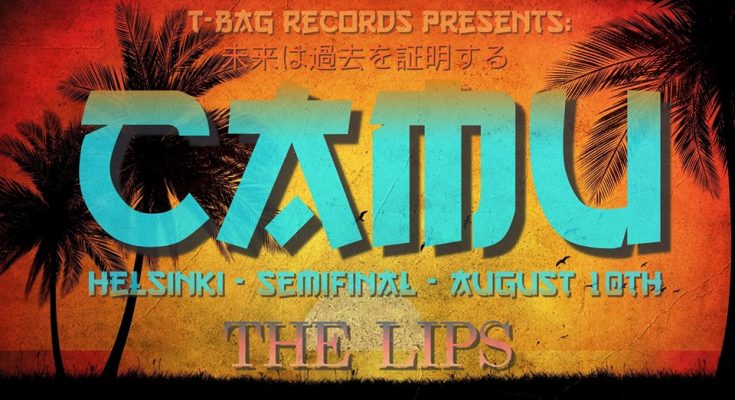 What do you do when the weekend is filled with huge events you can’t go to as a reporter? Indeed: look for a local and smaller band that happens to be playing a gig that same weekend. And if that band happens to be the new solo project of former Naked member Camu that is playing its very first live show in the capital city of his home country, you know that those who weren’t there, were missing out. So there I went, to the smaller side venue to the legendary Tavastia rock club in center Helsinki for a night of rock ‘n’ rollin’!

The Lips is a band from one of the cities/regions on the outskirts of the capital region of Helsinki. And their music is very radio-friendly easy-going rock music. Not my first choice of music personally, but definitely a fun band to see. Especially front woman Aino brought quite the high energy to the stage. The rest of the band came across a bit too calm for my taste but perfectly played the soundtrack to the impressive vocal range of Aino.

With a colorful backdrop I knew we were going to get a show filled with positivism and good vibes. Camu came back all the way from Hawaii to his home country to play his first live show ever with his new project and gathered some top musicians around him to facilitate this. Guys (formerly) from bands like Flippipuisto, Naked and Santa Cruz for instance filled the band with a whole lot of talent…

Melodic rock, positive feelings throughout the whole set. There were songs that Camu only released this past year, songs from his old band Naked and there was even a moment where they went punk with a guest vocal appearance by local punker Anzi Destruction. Smoke burst out on regular occasions, beer got sprayed through the venue, hair and sweat flew around. Even when Camu went to sit down on a bar stool with his acoustic guitar to play a couple of calmer songs, he managed to keep the attention of the gathered crowd completely.

Thank you all for a wonderful night, those who weren’t there truly missed out on something really great!