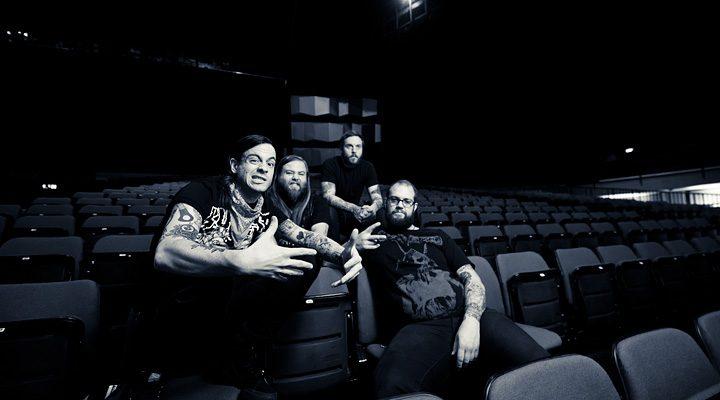 Six years it’s been since I last saw Cancer Bats. Tonight the setting is quite different than Groezrock ’10 though. No fully packed marquee on an extremely hot spring afternoon this time. Instead it’s about 20 degrees colder and there’s a lot less alcohol in my blood. But I am at least equally excited to see Canada’s finest energy-bombs. But first; let’s hear what Portland’s Lord Dying has to offer.

When the three-piece enters the stage the absence of a bass-player is among the first things I noticed. And though I keep thinking some additional lower tones could help these Americans give a little more depth to the great riffs they’re displaying with their sexy as fuck LTD Eclipses. With riffs that somehow smoothly flow between thrash and sludge they slightly remind me of the last band I saw in this particular venue. In my book that is a huge compliment, given the fact that band was High on Fire, whom I happen to love. Seriously, what’s not to love about great guitar solos without showing off too much with technicality and groovy thunder rolls by a drummer that is clearly enjoying himself? For my taste a bit more variation and melody in the vocals would help them to keep things fresh and create more of a hook. But when I look over my shoulder I notice the majority of the people behind me are just like me warming up their neck-muscles for the band they all came to see.

Already with his first line Liam Cormier proves my point that just a little more melody could easily provide a stronger hook to some heavy riffing. It is the uniqueness of their crossover approach to hardcore punk, metal(core) and ‘Southern rock’ that blends irresistible grooves with powerful screams and makes my heart beat faster than on the average Saturday night. Lead singer Cormier, who answered some questions in the interview which you can find here, is the one who takes responsibility to get the audience as pumped up as the band itself is. But this job is made relatively easy by the drive provided by drummer Mike Peters, the tight basslines by the hands of badass-of-the-year-contestant Jaye R. Schwarzer and powerful sound of Scott Middleton’s guitar. About halfway through the set it comes to mind that I should probably try to add some critical note to this review, but the Torontonian quartet isn’t making that an easy task. The set had kicked off with some of my personal favorites True Zero, Bricks and Mortar and Pneumonia Hawk. With Arsenic in the Year of the Snake, Hail Destroyer, Trust No One and All Hail in consecutive order Cancer Bats honestly slightly surprises me with how many awesome compositions they have in their discography. After that it takes a bit before we get to hear Road Sick and Beastie Boys’ Sabotage, two songs I was absolutely dying to sing along to. Cancer Bats may not be known enough in these regions to completely fill De Kreun, but the biggest disappointment of the night to most of the attendees seems to be the lack of an encore. I personally wouldn’t have mind ending the evening with Grenades, French Immersion or preferably both, but I suppose we’re spoiled enough as it is.