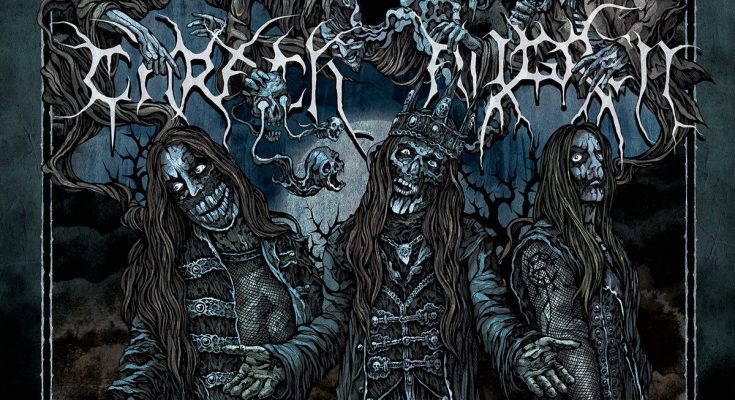 The band stays true to their style: aggressive guitars, creepy shrieking vocals and blistering drums, contrasted by magnificent keyboards and instrumental orchestrations. But several songs on Dance and Laugh among the Rotten prove that the Dutchies also broadened their musical horizon.

First song Opening is a typical Carach Angren intro. A spine-chilling piano piece sets the tone for the rest of the album. Charlie, the first single of the album, tells the story of a young girl stumbling upon a dark force called Charlie while playing with her Ouija board. It’s a typical symphonic black metal song, with eerie children’s voices calling out ‘Charlieee, Charlieee …’ Blood Queen opens very bombastically, with heavy riffs that slow down near the end. It’s a very dynamic song with a lot of tempo changes. This song is loosely based on the story of Bloody Mary. The ghost of this queen entered the girl’s house when the spirit world was open, during the Ouija board conversation with Charlie.

Charles Francis Coghlan is a slower Carach Angren song than usual. Singer Seregor shows a more melodic side of his voice here. The ghost of C.F. Coghlan was also summoned from the Ouija board. Charles Francis Coghlan was a famous actor and playwright in the 19th century. He died while being on tour and was temporarily laid to rest at Galveston cemetery in Texas. There was a hurricane going on back then. Charles body was swept away from its resting place. His body was found years later, 2000 miles further.

Song For The Dead is about the next ghost summoned from the Ouija board. It’s about a man who literally can’t let go of the dead. He keeps their body and dances with them, wears their clothes … This song is his tribute to the dead. It’s a catchy dark ballad. In De Naam Van De Duivel is yet another Ouija board ghost story. It’s about a witch who was sent out by the devil to destroy the relationship of a happy couple. Even though this is a very heavy song, it’s also really catchy. The Possession Process is a fast, creepy and heavy song about someone who becomes possessed by dark forces.

Pitch Black Box sounds quite industrial. Ardek’s recent collaborations with Rammstein’s Till Lindemann and Peter Tägtgren from PAIN and Hypocrisy probably has something to do with this. The song is about a cursed black box. “Thou shalt not open” is written above the lock. Three Times Thunder Strikes has a bit of a Swedish death metal vibe. It also has the best riffs of the entire album. This song is also the unraveling of the story about the young girl and her obsession with her Ouija Board. One month ago, the girl discovered a Pitch Black Box, opened it and unleashed the vengeful and strong force Charlie. Plot twist: Charlie was not summoned from the Ouija board!

Dance and Laugh among the Rotten is a very good album, filled with high quality songs. There isn’t one bad song on it. Carach Angren stays true to its typical style, but at the same time they have also broadened their musical horizon. Instead of just symphonic black metal, you also hear some slower songs, some industrial and Swedish death metal vibes, and singer Seregor also shows a more melodic side of his voice. Dance and Laugh among the Rotten is catchier and more accessible than Carach Angren’s earlier work, without ‘selling out’.