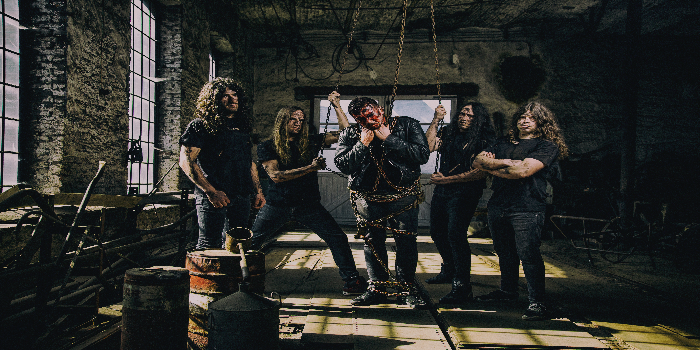 On Saturday August 25th Carnation walked straight out of their Chapel of Abhorrence to the stage of venue “De Klinker” in Aarschot, Belgium. Here they played all tracks of their new album for the very first time. It was clear Belgium had been waiting for this. Fans of all metal subgenres were there, confirmed the show being sold out. “Chapel of Abhorrence” is only their debut album and already released via Season of Mist. Later I’ll explain why this doesn’t surprise me much. It’s easy to say their release show was one of the highlights of the year for the Belgian metal scene. Other bands who played a big part in this were Schizophrenia, Lemuria, Bütcher and Warbringer.

Carnation let one of the more known and growing belgian thrash/death bands, Schizophrenia (**** 1/2), open for them. With their intro they’ll catch your attention immediately. I believe vocalist and bassist Ricky has this Lemmy-vibe going on around him, going for it for more than 100% and not seeming to give a damn about what others might think or say. Next to him are Romeo and Marty riffing like it’s their last day on earth. Both totally feeling it and always making sure the crowd gets that explosion of energy to look at. Schizophrenia is a band to check out if you’re a fan of bands like Demolition Hammer, Devastation, Morbid Saint, Dark Angel and like their name says it all, early-Sepultura. You could tell they’ve been working a lot and their new drummer, Lorenzo, is already doing great. You all better keep an eye open for this band.

Lemuria (*** 1/2) was on next. Normally I’m not such a fan of symphonic black, but like many others I was curious to see them play with their new vocalist, Daan, who used to be part of the belgian thrash band, called Bloodrocuted. His previous band split up earlier last year, after releasing their well praised album, called For The Dead Travel Fast. Lemuria’s new album will be released later this year. The album was tracked at Project Zero Recording Studio, which consists out of two Carnation-members, and later landed in the hands of one of them, Yarne Heylen.

The third band to play was Bütcher (****), who obviously sounded way better live than on their 2017-debut album, Bestial Fükkin’ Warmachine. Seeing them blew me away. Think about a mix of Judas Priest and Celtic Frost and you get that Bütcher sound. Add aggression, leather and steel to that and you have the perfect image of them playing this release show in your head. The crowd went wild and everyone around me seemed to know their songs and lyrics out of their head. Bütcher knew how to get the party started before Carnation began rocking the stage.

Carnation (**** 1/2) rose like a phoenix from the ashes. This because of the long wait for the new album and also as you can see on the picture, because Simon, their vocalist, seemed to take this saying quite literally… All jokes aside, the room was packed and people were still trying to get in. I’ve seen them play multiple times and so I can say I still get the feeling every time I see them they grew again as a band. For example, during the years I’ve seen Simon become an incredible frontman and I honestly get the Cannibal Corpse references people often make. Next to that, there’s Vincent, their drummer, who’s extremely dedicated to sound as tight as possible. Here’s a cool fact for those who didn’t know: he used to be part of Schizophrenia. I believe his brother and founding member, Jonathan, has a huge influence when it comes to the writing process. You can easily tell bands like Entombed, Dismember, Bolt Thrower, Morbid Angel, Deicide and many others had a huge impact on him. That’s also what makes Carnation the band they are. They play this cool mix of American and Swedish old school death metal (OSDM), combined with some influences of the United Kingdom.

In the intro I already mentioned they are signed under Season of Mist. The label also released some videoclips of them, like for the title track and an other one for Sermon of the Dead. The crowd went crazy when Carnation played these tracks live, everyone seemed to already recognize these tracks when they started playing the first few seconds of them. They clearly have a lot of fans in their home country. When they ended their set, people were asking for an encore. So they came back on stage and started playing one of their first tracks ever written. For us Belgians this is already considered a classic and then it became even wilder in Aarschot. People were moshing and shouting along. At the end of the night all there was left were some explosive cadavers and Carnation made sure they had plenty of choice when it came to shirts.

Sermon of the Dead

Warbringer (****) made a stop to Aarschot during their summer tour with Sepultura, so they could close this show for their friends in Carnation. Most of the people might already know them since they’ve been thrashing out since 2004. After releasing Woe to the Vanquished and ending up very high in many best-albums-of-the-year-lists last year, Belgium was ready to welcome them with open arms. Warbringer also made sure they were able to hook up every fan with their new single, Power Unsurpassed, released on wax (7-inch). Fast, faster, fastest and extremely catchy! Who really caught my attention during this set was their drummer, Carlos Cruz. Like many other OSDM fans, I already knew him as the former drummer of Skeletal Remains. Currently he’s working on a new record with the one and only Chris Poland (ex-Megadeth), which will be mindblowing, I’m sure.

As you can see these bands are all on top of their game and made sure this release show became an unforgettable night for many of us. Last but not least a special shout out to Bob Briessinck, the sound engineer who also played an important role in making this show so great.