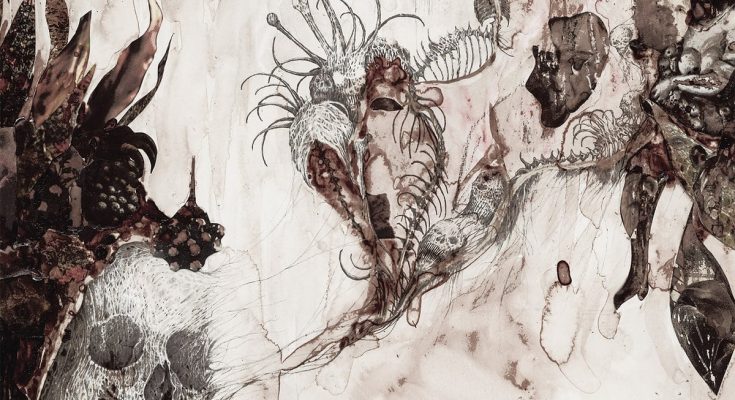 Iron Bonehead presents the first album by the raw melodic and atmospheric black metal outfit Celestial Grave. Since its formation this Finnish duo has released a demo, EP and a compilation. Within a short period of time the band now grants us their first studio album entitled Secular Flesh. The eponymous duo sets a firm entry of quality material. By possessing a growing songcrafting ability they introduce their musical art in a refined manner. Secular Flesh is a heavy mélange of raw atmospheric black metal and intense tremolo picking, brought into the raw boundaries of aggression. Celestial Grave‘s take on black metal isn’t quite the typical style that defines the Finnish black metal trend. Although the music isn’t original, the duo has elaborated on their sound from the debut. The band isn’t influenced by the second wave of black metal. The debut in factsounds very modernized and refined. There is a deep value of effectiveness in the musical creation which mainly covers the gloomy and occult side of the band.

Opening track Lamentation begins with a poignant spoken word section when suddenly the drums and the echoing rasps reverberate. With a skillful and refined take on music it centers upon an atmospheric and occult style of black metal. The debut album is brimmed with dark occultism and epic emotions overcome by strong vehemence. There are plenty of filtered melodic hooks flowing into the soundscapes. Celestial Grave has truly developed its own distinct pattern of melodies and by grasping such complex songwriting abilities. They add melodic patterns and mold their songs to sound very touching. These effectual melodies mostly emanate from the guitar and they’re beautifully scaled throughout the album.

This sophisticated talent for making each of the four tracks flow vividly into their dark atmospheric style is adeptly fulfilled. The second track Secular Flesh consists of many different parts where you can hear the crude melodic progression of the guitars. Each piece is firmly connected and contains equal proportions of melodies and raw aggression. I’d compare the quality of the songs on the debut to bands such as Venenum and Tribulation, Secular Flesh is replete with somber moments and beautiful guitar transitions that vary from rapid tremolo picking to melodic portions. There are also many influences from the post rock style of melodic solos that contrast with the raw orientation tone.

Celestial Grave aims at a high level of atmospheric grandiosity while the vocals mostly sound haunting. The riff patterns are distinctly melodic and catchy. As mentioned the tracks are well balanced between the raw elements of black metal and it feels that the latest craft from the Finnish duo is quite impressive. For instance, the array of harmonies and melodies fits with the musical style. The guitar progression shifts to aural ferocity when the drums burst into blast beats and creates a sonic intensity. The vocals’ role in uttering the ghostly shrieks and raspy growls is yet another fulfilling performance.

Gasping from the Lips of Night portrays a boisterous and high spirited ferocity and concentrates on the aural chemistry between the instrumerntation. It feels like you are caught amid a raging turmoil of howling vocals, heavy drum beats and scorching tremolo where melodies and harmonies are brilliantly intermixed. Celestial Grave understands how to craft a lively and coherent piece of music with a dark atmospheric vibe that spreads into a sort of gloomy sprawl.

Secular Flesh is achieved through a high level of creativity and the fact that this type of music requires a lot of reflection and sheer magic to reach such a result. Calamitous Love, the final track on the album is set on a high spiritual and mystic sensation. Once you get carried away by the music you will sense the pure essence of spiritualism and the unstoppable transition from the refined atmospherics. Secular Flesh is dark and beautifully mesmerizing in its mystical nature of transcendence. It is recommended for those who like atmospheric black metal with a refined touch of creativity and harmony. Secular Flesh is only 31 minutes but the experience is quite deep and immensely exceptional.