The French black metal scene has become a primary source of inspiration that brought neophyte methods to diversity and melodies. In this epoch, we saw the birth of many influential bands such as Deathspell Omega, Blut Aus Nord and many more artists who defined the French black metal style. The traditional approach of the modern black metal bands in general combines high pitched vocals and melancholic atmosphere. Some bands began to flourish on a bigger level and became the center of attention. For instance, the French black metal band Cènotaphe which embodies the melodic aspects of the third wave of black metal. The French duo Khaosgott (vocalist) and Fog (multi-musician) presented the primary elements of melodic riffs and the raw standards of emotive black metal on the 2019 EP Empyrèe, taking a wider approach to create a saccharine quality of melodic black metal.

Cénotaphe’s first full-length album Monte Verità is much anticipated by the fans of the genre and is finally near. In no time the French black metal band ascended to the top list of the finest elite bands of France with the second EP Empyrèe containing six tracks of raw melodic black metal, brought by the effect of the provocative rhythm and the complex balance of melodies with remarkable vehemence.

The eerie synth on the opening track Myosis conveys the mysterious nature and the majesty of black metal music. Monte Verità defines a new epoch of the French black metal specimen, musically the duo creates many awe-inspiring moments with the deep hoarse vocals of Khaosgott and beautiful guitar arrangements exhibiting a passionate flow on the debut album. The second track Aux Cieux Antèrieurs has that medieval atmosphere, with blazing tremolo pickings sewn into the song texture and the fast-paced tempo are fulfilled by traditional tremolo riffing.

The grandiosity of the melodic guitars and the male choir creates a majestic aura. Monte Verità is highly melodic and full of inspiring riffs, the unique presentation of the tremolo riffs are quite catchy. It’s no surprise that the album is well-defined in terms of emotive rhythm. L’oeuf de Mammon introduces catchy guitar patterns and the drums set a constant tempo of blast beats. The ardent melodies gracefully cascade during the mid-paced tempo and the rhythm guitars add a perfect sense. Cénotaphe reflects the nature of the French black metal aesthetics, the duo blends melodies and medieval elements as they allow the energy to stream through the blast beats. De mon promontoire Astral builds upon the anthemic clean vocals when suddenly the tempo becomes violent part of the beauty comes from the energetic tempo and the saccharine melodies.

The gloomy sense of rhythm which shows an experienced level of songwriting is achieved through a refined display of the guitar work. The approach to melodic black metal is reminiscent of early Ulver album Bergtatt. And the clear emphasis on mid-tempo makes most of the tracks flow in a sentimental power. Monte Verità has many dimensions from medieval art to paganism.

Channeled through the raw ingredients of the second wave of black metal the album is driven by the blazing tremolo riffs. And deep howling growls to create a unified symmetry between gloomy melodies and cold ambiance. The guitars on Emersion provide a layer of gloomy atmosphere and builds a melancholic medieval theme. Then later becomes more of a fast-paced track with the anthemic mood and the bursting drums delivering endless streams of blast beats. The contents of each track are brought by unique melodies, whereas the final track Monte Verità is balanced by the melancholic atmosphere. Cénotaphe debut is highly recommended for fans of early Ulver, Aorlhac, and Nécropole. 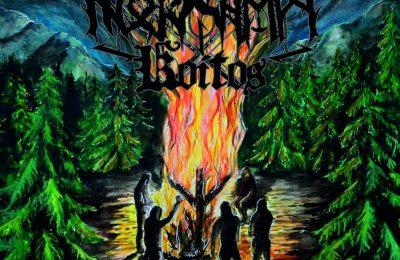