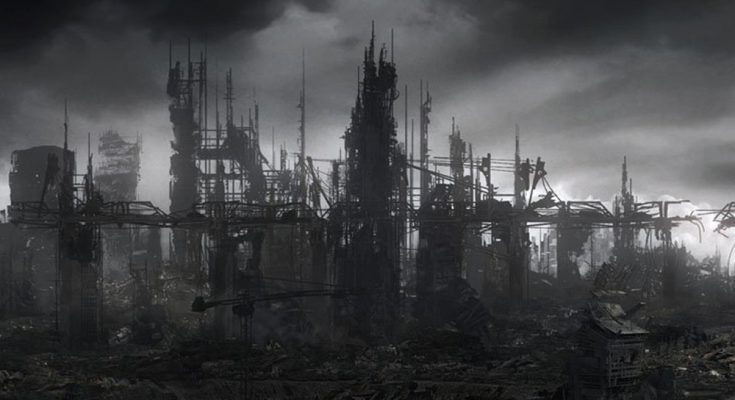 The Belgian rock/metal band CHARCOALCITY had to go through many murky and stormy waters to get where they are now. The musical brain behind the outfit, Peter De Zutter, has been working on his music since 2014. Because some curve-balls were thrown in the band’s life, like a record deal that didn’t go through after all and a heavy accident of Peter, delayed getting anything released. Still prevailing and getting a lot of positive feedback at gigs, they decided to release their album after all on their own… and here it is: Greyscale.

After a lengthy intro for the first track Darkness Rules we already get a good look at what CHARCOALCITY stands for musically: straightforward decent industrial rock/metal. Peter‘s voice reminds me somewhat of Trent Reznor and Nine Inch Nails and so does the music albeit less experimental. But that doesn’t mean it’s bad, not at all! Somehow they manage to blend some of the most recognizable industrial rock sounds from bands like Nine Inch Nails, Rammstein, Marilyn Manson, Depeche Mode and Ministry with the more catchy sides of nineties rock like Simple Minds, U2 and Gary Numan with a bit of grunge sauce poured over the whole thing. All of this resulting in very pleasant groovy and sometimes heavy guitar riffs, simple but oh so effective drums and a grumbling bass support a really cool voice. Sometimes it seems like some of the songs lack a bit of power, but that really didn’t spoil the fun for me one single bit.

One of my early favorites is the textbook industrial rock sounding Feed Me with a really cool guitar solo more towards the end. Also Democracy really caught my attention, starting with again that typical industrial sound and later on groovy and melodic riffs kicking in. The content of this song couldn’t be more fitting today, singing about that democracy basically is a lie and that we should be aware of that. It’s actually something that goes for most of the album: there’s comments and a critic’s look on society to be found everywhere. Especially Leave, singing about the ridiculousness of terrorism and extremism, feels incredibly relevant to this day. Though please keep in mind: CHARCOALCITY doesn’t want to preach intolerance, they just question the extreme actions taken in name of a religion…

They continue with an instrumental title track, using only samples of speeches by former USA presidents George W. Bush and Barack Obama, reminding me very much of work by one of those other great industrial metal outfits Ministry. The second half of the release remains delivering classic industrial rock/metal songs that are pretty decently made, some I’d even almost dare to call catchy (like for instance Catkiller). I guess I can easily conclude that you really have to check their work, if you like music by earlier mentioned bands even a bit. A great addition to the music scene and it leaves me only impressed by the tenacity and persistence of the band to keep on making their quality stuff. They definitely deserve your support and I’m looking forward to how they further develop their sound.