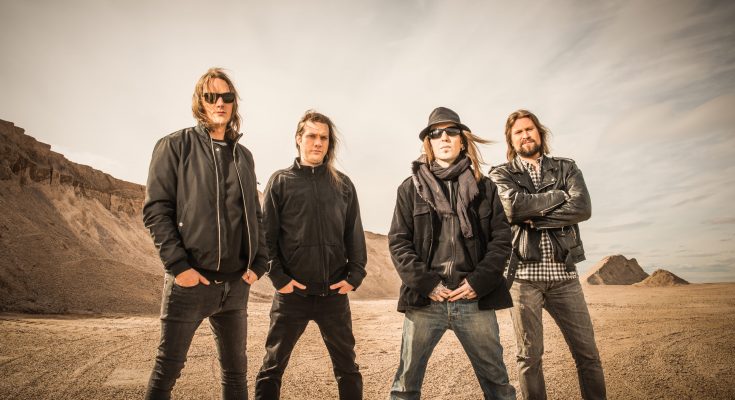 Finnish metal legends Children of Bodom are celebrating their 20th anniversary with a tour dedicated to being “20 years Down & Dirty”. On the first leg of their tour they ended at The Circus in Helsinki, as good as in their hometown, so we had to have a talk with one of the guys. This time the man of choice was keyboardist Janne Wirman, with who we had a very relaxed and pleasant talk!

So, last stop of the tour celebrating “20 years Down & Dirty”. Sort of a homecoming gig, how’s the tour been?
Yeah, it’s been great. It’s one of those tours I wish it would’ve lasted for another month. I became great friends with the ONI guys (the support band, FYI) and we just hang out all day, have fun every night. It’s been amazing!

That’s great! Since it’s your last stop and it’s in your hometown, have anything special planned?
No, we’re pretty much doing the same set we’ve done the whole tour pretty much. Like sometimes when we come back to Helsinki and maybe do a bigger venue like the Ice Hall or whatever we might add some pyro or something to the show. But this time we didn’t feel the need to do that, it’s more about the old songs than anything else, so yeah.

And it’s kind of cool that it’s a bit more intimate here, which sort of fits the celebration.
Yeah, right.

Last Summer I had a talk with Jaska (Raatikainen, the drummer FYI) at Tuska about what you possibly could do to celebrate the 20th anniversary. And I had a bit of a look on beforehand at your setlist of tonight and noticed that you’re not just playing the full first album. How did you guys came to that decision?
Euhm, we decided to steer it more towards the celebration of the first 2 albums even though it is the anniversary of the first album. And there’s like one song of the first album that we never played live back in the day, so we decided to play that one. And there were a couple of songs of the second album we also didn’t play live. So we wanted to combine like really rare stuff into setlist and thought that some of the fans would get a kick out of that.

Probably! Jaska was also wondering back then if you would still be able to play the older, faster songs. So how did you experience that?
I don’t think, speed-wise… well, he was probably talking out of the drummer’s perspective… but the old stuff is not that technical, it’s just weird (laughing) And first I thought “oh fuck, the old songs, I’m going to hate my life!” but no, it’s been surprisingly fun. And for me to  dig up the first album and start practicing I’m like “Fuck man! It’s been like 15 years I’ve been listening to this!” So yeah, it’s been surprisingly fun, all of it.

Yeah, it seems to me like great for a band that has been going around for so long to be able to go back a little bit to their start…
Right. And we’ve kind of have buried the first album somewhere back in there, ’cause it really doesn’t reflect the band’s style today much. I mean, obviously it’s where we started and you’re supposed to be proud of it. But already the difference between the first and the second album is massive in my mind. But now I have a brand new attitude towards it because it has been so much fun playing those weird songs live… (laughs) For years I was like “Fuck, I wish that album wouldn’t exist!” but now I’m more like “hey! it’s fun!” so that’s good (laughs)

You’re back in your hometown and I know that you have a constantly reserved spot at The Riff here for when you’re in town. So are you planning to have a bit of a party there after the show or are you more like “pfff, I’ve been touring for awhile now, I’m too tired!”?
Yeah… euhm… I’m sure some people are going to go to The Riff, but I’m planning to do something with the ONI guys. I don’t know yet, but I might not end up at The Riff… I’m sure there’s some kind of a celebration going on over there (laughs), I might not be a part of it, but I’m sure there is…

Now, you guys aren’t playing your first album in full live, but I was wondering if there would be any album of another band you’d love to see live from start to finish?
Oh… well, I heard Stratovarius playing the whole Visions and I loved it. ‘Cause our first album and Visions came out at the same time and as a kid I was a fan of Stratovarius. So I went to see them the whole Visions and I thought it was great, well executed and such. And then they also did a tour where they played the whole Episode album, but that I missed since I was on a tour myself. So I would’ve loved to have seen Stratovarius play the Episode album. I know it’s becoming a thing, a lot of bands do that, they play a full album. We’re not opposed to it, we’ve had some discussions, but this tour we just decided to do it like this.

Well, it’s kind of cool as well because you get some stuff of the first album, but then also some from the other first albums too…
Yeah, and we had to play the rarest stuff. Some years ago we still played like The Red Light pt. 1 and Angel of Death and such. That’s why we left those out, we just wanted to get the rarest stuff there…

Yeah, I have some friends back in Belgium that are cursing right now that they can’t be at this show. Especially since there wasn’t a stop in Belgium as well…
That’s also why I said in the beginning “I think the tour was too short”, because it really was too short. It was compressed into 1 month while we usually do like 6 weeks. So that’s why Belgium and some of the Eastern block and countries like Spain were left out. I’m hoping this is the reason that we could do another tour like this with the same theme maybe… I would like to do that.

I don’t think anyone would complain about that (everyone laughs)…
I hope… That was the idea of this tour being a bit shorter and leaving some key countries out, so we could bring the same tour back if needed.

Besides possibly some more touring, any nearby plans?
No, we’re doing only limited festivals this Summer because we’re writing a new album. Towards the end of the year we are going to record a new album. So then when that comes out next year, it obviously starts a new touring cycle of the album. But… this is not official info, just my feeling… if there’s time between the recordings and the release of the new album, I would love to do another one of these tours around Europe ’cause we left some countries out. So why not do another of these tours while waiting for the new release?

Awesome. Now, you guys are known for recording cover songs on regular occasions. Is there any of the many covers you’ve done that is your absolute favorite?
There are a couple of really good ones! One of the oldest ones, now that we are celebrating the old stuff… the Alice Cooper Bed of Nails cover. I think it’s killer, it has a great kind of thingy towards the end where we really turn it around and make it very “Bodom“. It’s one of my favorites!

It was also really cool last year at Tuska to see you guys play some more cover songs than usually!
Yeah! That was a lot of fun! And we brought some crowd on stage and such…

Yeah, that was quite the party!
That was a lot of fun for sure!

Well, I think I’m about through my questions, any last words you wanna share with our readers and your fans?
I wanna say thank you to everybody who is coming out to the shows, still supporting the music… It’s tough, ’cause you can’t support it by buying an album anymore… (laughing) But thanks for coming out to the shows definitely, hope to see you around!

Oh yeah, I read about you not being happy with Spotify and the present state of the music business…
Yeah… it got a bit out of hand… I know Spotify themselves are not the problem. Also my words were put a bit in an unfair…

Those journalists… (everybody laughs)
I’m just not happy how the streaming, when that kicked in the record companies still made sure that they still got their money, but the artist didn’t get any money anymore… That’s pretty much the problem. I shouldn’t blame Spotify and if I did, it wasn’t right. This is such a transition for the whole music business, no  one knew what the hell was going on… we just realized “oh the royalty check isn’t coming in anymore” And then you read of the revenue, how much… like now record labels are back into making their best money ever, they just decided to eliminate paying the artists… smart… (laughing) So yeah, that’s the problem, Spotify isn’t the problem, the problem is somewhere else!

Uhu, anyway: thanks for the talk! (everybody laughs) Enjoy your show later today!