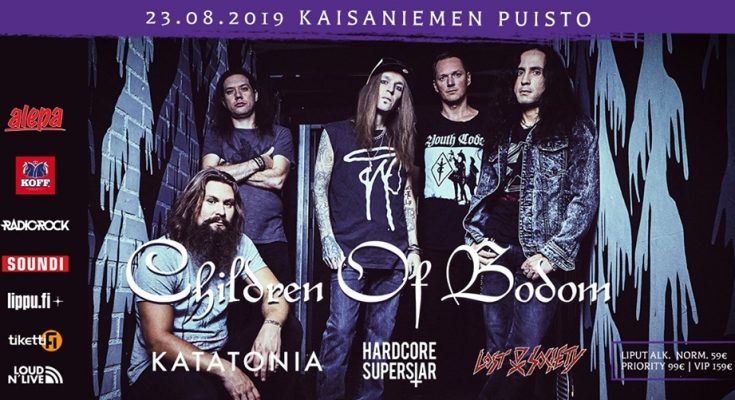 Ever since I moved to Finland, it seems I’ve been seeing Children of Bodom at least once every year. I absolutely love them, but after a while you get a bit picky on which show of theirs you go to. It had been about a year since I saw them and Loud’n Live brought CoB to Kaisaniemi Park. A park right next to the central railway station of Helsinki that used to be the setting for Tuska before they moved to Suvilahti. Them doing a headline show in open air in that place felt like it could be something special, so there I went…

First band of the day… Lost Society! I recently got more into these Finnish youngsters and here in the park in center Helsinki in the pouring rain they proved yet again that this is a band with a big future. They kicked ass with their groovy thrash metal and their most recent single ‘No Absolution‘ is probably one of the most catchy tracks I’ve ever heard of them. I was also very pleasantly surprised when they covered the Rage Against The Machine track ‘Guerilla Radio’ and did a very admirable job with it! I almost forgot about all the wetness around me. Vocalist Samy couldn’t thank the crowd enough for them to show up and stick around even though it rained so much and we loved them for that!

Setlist:
My Prophecy
KILL (Those Who Oppose Me)
N.W.L.
Guerrilla Radio (Rage Against The Machine cover)
I Am the Antidote
Deliver Me
No Absolution
Riot

The one band that stuck out a bit between the rest was definitely Hardcore Superstar. This Swedish sleaze rock / hard rock band can’t really be seen as metal, but they absolutely killed it between those other heavy hitters. With their last album ‘You Can’t Kill My Rock ‘n’ Roll’ they proved to be on the top of their game and their brand of rock is high energy, groovy and hard hitting. And so is any show by them, even the rain didn’t hold them back any bit! It was great to see them again!

The second Swedish band of the night: Katatonia. Their music was definitely the most perfectly fitting one for the drab and grey weather we were seeing that day. This show in Helsinki was part of their extensive tour celebrating the 10 anniversary of ‘Night is the New Day‘, which is a very doom centered release. With just the depressing album cover towering behind the band and every single member being completely engulfed in their emotional music, it became a masterclass in how to doom. Not necessarily my first pick of music, but this was a very pleasant visit!

The closer of the night was of course the legendary Finnish metal band Children Of Bodom. You can say whatever you want, but these guys know how to put together a blistering show. When they all got on stage and immediately kicked off with the classics ‘Needled 24/7‘ and ‘Hate Me!‘, we knew what was up… get ready for metal mayhem!

Of course they played a couple of songs from their latest effort ‘Hexed‘ and the new work like ‘Under Grass and Clover‘, ‘Platitudes and Barren Words’ and ‘This Road’ didn’t stick out like a sore thumb anywhere. Before ‘I Worship Chaos’ came up, the whole band got presented by a gold record for that album within Finland, a nice moment of recognition for the guys.

Children of Bodom playing outside means pyrotechnics! So while cranking out hit after hit like ‘Downfall’, ‘Lake Bodom’ and ‘Angels Don’t Kill’, fire was shooting almost from every corner of the stage… After that blistering set, they still played an encore with ‘Living Dead Beat‘ and ‘Are You Dead Yet?‘ and surprisingly enough a Dropkick Murphys cover under the form of ‘I’m Shipping Up to Boston’ having Lost Society on stage with them. Yet another great show by this Finnish household name!

Setlist:
Needled 24/7
Hate Me!
Under Grass and Clover
In Your Face
Platitudes and Barren Words
I Worship Chaos
This Road
Everytime I Die
Downfall
Hecate’s Nightmare
Hatebreeder
Lake Bodom
Angels Don’t Kill
If You Want Peace… Prepare for War

Encore:
Living Dead Beat
Are You Dead Yet?
I’m Shipping Up to Boston (Dropkick Murphys cover with Lost Society)

For more pics of the night, go here:
https://www.grimmgent.com/children-of-bodom-(kaisaniemen-puisto)-23-8-2019