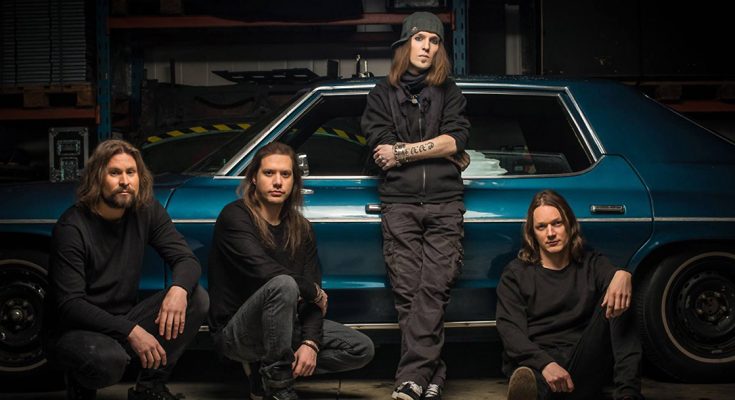 On the last day of Tuska Open Air 2016 we got the chance to have a talk with Jaska Raatikainen, drummer and co-founder of Children Of Bodom. We were nervously waiting in the rain next to the main stage to be picked up by the promo manager. We were brought to a small building behind the main stage that was outfitted with long tables and benches to eat something at and some couches in a corner. When we entered, Jaska seemed to be playing with his kid but then joined us on the couches for the following conversation… 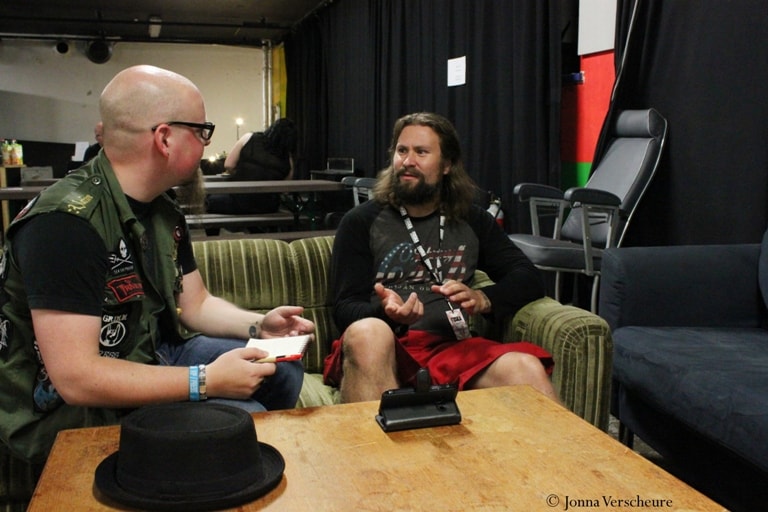 Hey, it’s kinda nice to get to talk to you. Because we read online that you almost never do any interviews…
Yeah no, not that much.

So yeah, it’s really nice to be able to talk with the co-founder of Children of Bodom. Anyway, recently there was a change in the line-up. What was it like to record the new album with a 3-piece instead of 4-piece? Did it make any difference?
No, I think it was actually very easy for Alexi ’cause he had to do a lot of work to play the tracks but at the same time, he knows the songs really well. So it was really easy.

I noticed that Alexi is mainly mentioned as the composer of the songs and writer of the lyrics. Do you and the other guys have any input?
Oh yeah, we all arrange the songs together. It’s a team effort. But yes, it’s mainly Alexi… You know, he brings a riff to the recording place and we play around it, try some things out and such.

And how is it working out for the band to play with Daniel, the new guitarist?
Well, very good! I mean, he’s such a nice guy, he’s humble, he’s very motivated… It’s just not that he previously got an offer to play in a big band. He has his own band too, he’s a guitar player and also used to sing. He’s talented…

That’s good. Talking about instruments, we read that besides the drums you play the piano and the French horn. Do you still pick up the French horn often?
(laughs) Not anymore… I played the French horn for 8 years. I have a classical education, I started with piano when I was 3 or 4 years old. Just playing whatever song and then I was in a music class since 3rd class. So yeah, music is my life. But indeed, I don’t play the French horn anymore. But I just bought an electric piano, like two years ago. I just needed that, to play some classical pieces and such, you know. 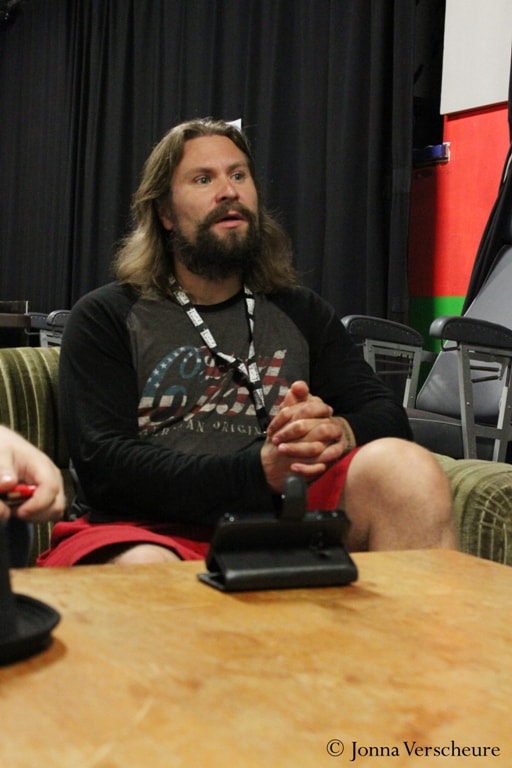 Back to the recent album: we read that for I Worship Chaos it was the first time that you didn’t use a real commercial recording studio. It was a converted warehouse or something like that?
Yeah, the place is indeed something like a warehouse. It’s a big hall where you can even drive in with a semi-truck, so it’s huge! We rented that place and built a rehearsal place. So, we wanted to try out if we could record the drums there, cause that’s really difficult. That’s why we usually go to a real recording studio. But that turned out to be a good solution and ended up recording the whole album there. We saved money. A lot of money.

That’s always good! And it even seems like it had its influence on the album. A colleague of mine, who is an old-school fan of Children of Bodom mentioned that he really liked the new album for its old school feel compared to the other more recent albums. Did you do that on purpose or did it just happen?
No, it just happened. We never think about what kind of album we’re going to do. All the songs just come out. Suddenly you might get the slowest song ever or then the fastest song, you never know what you’ll get.

We also noticed that on the bonus CD there are a few cover songs again, how do you pick those? There was like Danger Zone by Kenny Loggins and such…
Uhm, that’s the Top Gun track? Yeah, I don’t know. These are sometimes hilarious, they sometimes sound so stupid that we just need to do it. Don’t take it too serious, it’s like a hobby for us. So we can do whatever we want, we can like get in a different mode: “Ok, now we’re doing covers and not necessarily have to worry about the CoB sound.” We just do this or this, make it funny or… whatever! 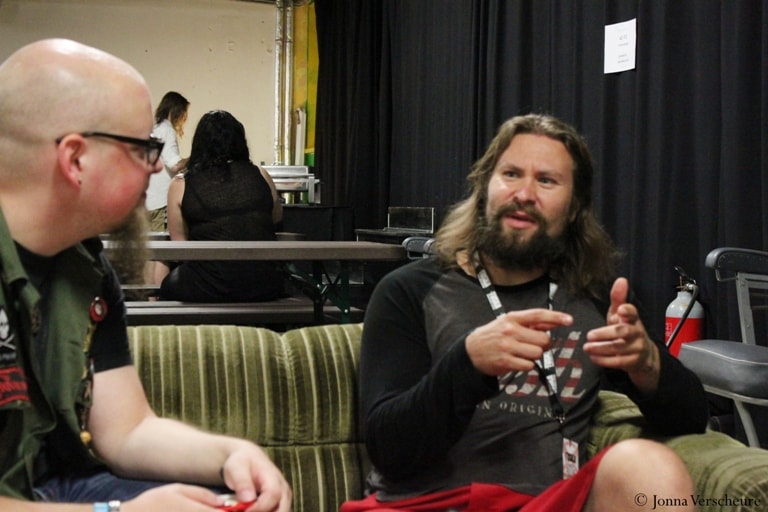 So basically it’s a bit like a “let loose” thing, you made your music that you take seriously and now you let loose…
Yeah,it’s like when you go out to the bar. But we do this.

I don’t know if you have any background on this, but how did you happen to work with Wednesday 13 on one of the cover tracks?
Yeah, I don’t know, I don’t remember really. It was mainly Alexi who settled that.

Ok, no problem, I just thought to ask if you had any idea. So, have you already checked out any bands here at Tuska?
Well, I just arrived, so not really.

Are you planning to check out any bands then?
Oh yeah! Gojira… I like that band.

Oh yes, they’re very good! Anyway, are there any future plans that you can share with us yet?
Well, our near future plan is doing these summer festivals and some shows in Japan in October. We also plan to do a tour in the US this year. And next year it’s going to be our 20th anniversary of the first album. We’re planning to do some sort of a European tour to celebrate this… euhm… achievement or whatever you want to call it. So yes, we were thinking to maybe… one idea was to play the whole album through, from the first track to the end. But I don’t know if we still can do it… (laughs) But something like that…

If you’d do that, it probably would be something that old school fans would really be happy about…
Yeah, that’s… I just went to a Finnish festival a week ago. I went there a day before our show because I wanted to see Mayhem. They played De Mysteriis Dom Sathanas… So I was like “I need to go there!” Cause I listen to that album on every tour like 50 times. When I feel restless before going to bed, I just listen to that album. So I drove to the festival and I was like… it was… crazy! They played all the songs from the album and I was like “Oooh, this is not happening!”. I was in the crowd just… like a fan!

I can imagine. For oldtime fans something like that, when it happens and you can get to that gig… Most of the time one of those older albums is the one you got to know them with and played the cd until it got worn out. And when you get to see that live, it must be amazing!
So I was thinking that for some people our first album meant a lot. And of course for us also, I mean, we don’t play all the songs live anymore. But we were 16 or 17 when we did the songs and… Anyway playing the whole album could be a big thing for fans, so… let’s see!

Any chance of Belgium being on the tour list?

You seem to visit Belgium quite often, so we hope so too!
Oh really? What was the most recent venue we played at then?

I think it was in Antwerp… Trix.
Oh right! Trix! Yeah yeah! Hopefully we can come there again then.

I’ve been asking every Fin I interview here, have you tasted any Belgian beers yet?
Hmm, I should know a lot of beers, but Belgian beers… What are you most famous ones?

Well, we have a lot of different beers in Belgium. But I guess the ones that are more known here are like Stella, Hoegaarden, Duvel, Leffe,…
Duvel? Oh yeah, that one is quite heavy. And isn’t Hoegaarden served in a big glass with like a lemon or something?

Anyway, I always like to end an interview by giving the artist the last word, so…
Well, I hope we come to Belgium like early next year… and get the chance to drink a lot of Belgian beers!

Well, there’s a lot to choose from! Thank you for the talk!

We took some quick pictures with Jaska and said our goodbyes, wishing him a great show closing Tuska (which it was for sure!). 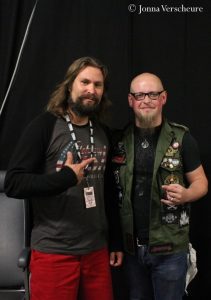 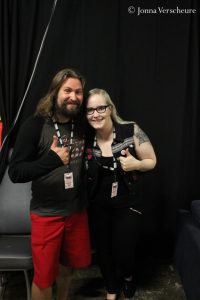