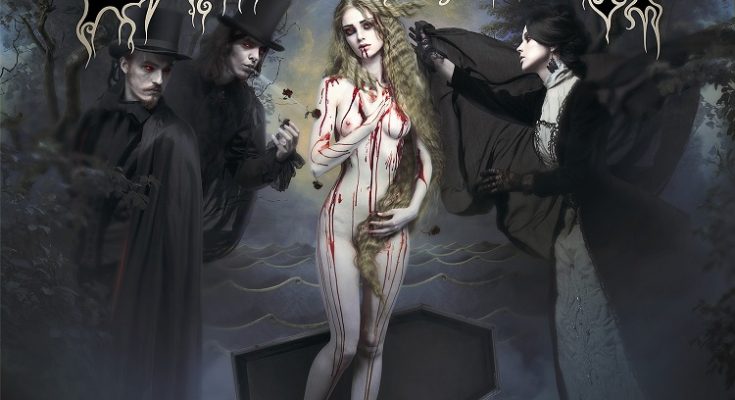 British Extreme Metal icons Cradle Of Filth have been very productive in the last few years. Since 2010, Dani Filth and his bizarre minions brought forth no less than six albums. Admittedly, two of these were reproductions of earlier works, but still. Four albums of the complexity and grandeur we know CoF by in seven years, it is still remarkable. Question is, does this high production rate influence quality?

Well, that depends which Cradle Of Filth you prefer. The times of raw Black Metal monuments The Principle Of Evil Made Flesh, Dusk And Her Embrace and Cruelty And The Beast are long gone, like it or not. A period of more melodic, atmospheric Gothic followed with Midian, Bitter Suits To Succubi and Damnation And A Day, with Nymphetamine as a logical turning point to the rather bizarre unicum that came to be Thornography. About that: CoF may have lost a lot of early fans with Thornography (as far as they hadn’t turned their backs on them already while the Black Metal elements disappeared more and more into the background), but a band daring to explore its own boundaries always deserves respect. I have always considered Thornography “good in its own way, but it ain’t no Cradle Of Filth”. I now realize I was wrong: it is always and only the band who decide how they find musical expression to the demons within them. Those who don’t like these new musical turns, should just stick to the older albums and stay away from the comment section on Youtube.

This being said, does the birth of Cryptoriana mark a new musical turn for CoF? From Godspeed Of The Devil’s Thunder on, we notice a new dynamic in which orchestral melodies are more and more replaced by baroque bombast and grandeur, while the metal music gets more hard and aggressive. Definitely no return to the age of Black Metal; rather modernity creeping in. We saw this of following albums Darkly, Darkly, Venus Aversa, The Manticore And Other Horrors and Hammer Of The Witches.

Cryptoriana: The Seductiveness Of Decay is no exception to this tendency. Opener Exquisite Torments Await starts off with the by now classically theatrical intro by copperblowers and drums, but unusually quickly, the metal frenzy and Dani’s obligatory Nazgûl-screams invade the harmony. From slack, threatening and narrative, the song develops into a whole which, by some conceptual freedom, might even be sounding a little like Power Metal, through the combination of bombastic background choirs and fast drumbeats. On the next track Heartbreak And Seance as well, this combo reminds of bands like Therion. At the same time this track also offers more nostalgic memories to Cruelty And The Beast, but the new style remains dominant and Dani’s voice ain’t what it used to be (seriously though, who can blame him). His storytelling, rather than singing or screaming, emphasize the musical narrativity even more than Lindsay Schoolcraft’s symphonic keyboards. If we would compare to the earlier work (which is something I strongly advise against since this album is entirely different and should be appreciated as such), the new album bulks of technical solos. Maybe guitarists Richard Shaw and Ashok found the time ripe to provide a counterbalance to Schoolcraft’s bombast and put their own technical talent in the spotlights for once. All of this can also be said about Achingly Beautiful. A couple of obligatory acts are performed: pompous poetry, a vacuum with high choirs and organ and of course, some “tubular bells”. We also sense more modern female singing lines, technical machismo and harder drum rhythms. In terms of composition, all is well: there is enough variation in rhythms and paces and it is almost a relief when the constant keyboard make place for a couple of more modesty, strategically placed notes.

Wester Vespertine takes off with choirs and creative keyboards. When the guitars join, we get to hear the best part so far for those who like the Black Metal elements but can appreciate a soft piano mingled into it. Throughout the song, there are some vague Thrashy riffs which in fact turn out to be quite nice. The song remains rather calm. The Seductiveness Of Decay, on the other hand, is far more energetic, maintaining the same Thrash Metal moments complete with solos and general guitar work to the likes of Kreator. They really hit it off with a fun mix of symphonic keyboards/harpsichord on the one hand and equilibrium between Thrashy and melodic guitars and drums. It renders the new Cradle of Filth a touch less dark, but at least it is fresh! To some level this continues in the gloomy Vengeful Spirit and the agitated, more “black” You will Know The Lion By His Claw. Closing track Death And The Maiden is definitely one of the better tracks as well, maybe because keyboard disappear more into the background and make place for ominous clean guitars and the killing bass of Daniel Firth (because yeah, let’s make the band members’s name all fun and confusing).

All in all, we are presented with only eight tracks, not much for your average CoF-album. Luckily, each song takes about seven minutes, So it’s not like you’re getting robbed. Honestly, this is one of the most diverse and creative phantasms that have spawned from the sick minds of our British heroes in years. Not only lyrically (as the poetic intellectualism is obviously a keeper), but also musically Cryptoriana feels very narrative. The album is bathing in a Victorian atmosphere. This band is not afraid to cross and explore new boundaries and horizons, maintaining their strong technical composition. The album, in short, deserves to be given an unbiased listen, without nostalgic comparison to their earlier repertoire. Cryptoriana – The Seductiveness Of Decay was born under the flag of Nuclear Blast and has been waiting for you in stores since September 22nd. Hurry!