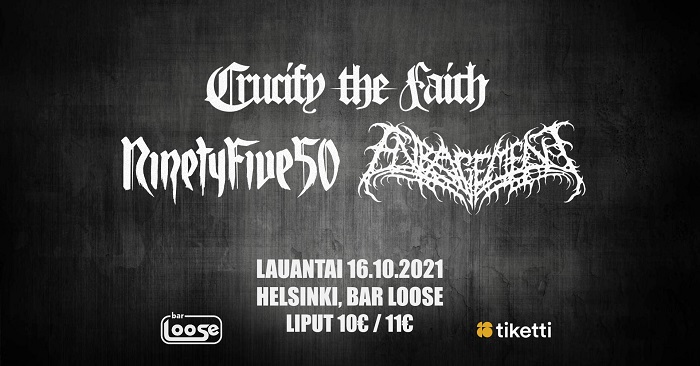 Gigs are slowly picking up speed again in quite a few countries and while bigger international tours are falling like flies, smaller local shows are filling up the emptiness luckily. The live club situated in Helsinki’s Bar Loose is a welcome platform for many such events and a line-up of up-and-coming local Finnish bands is not an unfamiliar sight at the venue. With the death metallers Enragement, metalcore/melodeath outfit Ninetyfive50 and modern metallers Crucify The Faith, it was quite the promising bill for a good night of heavy music fun and we just had to be there.

While I’m usually not the biggest lover of death metal, somehow most of the death metal acts I catch live really vibe with me. So did Enragement as the openers of the night. They might not have had the biggest of crowds when they started, they soon had of most the people present bobbing their heads to the crunchy riffs they cranked out. Musically they really impressed me with, besides the killer riffs, some damn tasty bass licks. It’s been a while that I was caught unaware so much by a bassist like this, kudos to Juhana for his clear skills on the instrument. Throw on top of that the perfect balance between the 3 axemen each taking their turn center stage with their vocals, bringing in an extra dynamic to the music compared to how it would’ve been with only 1 vocalist. A pretty nice discovery that most likely will end up in my short list of death metal outfits I enjoy listening to!

As usual, I checked out the bands of the line-up before the show and Ninetyfive50 was immediately a band that caught my attention with their groovy nu-metal tinged metalcore. Quite looking forward to what I was expecting to be a quite energetic show, and they did not disappoint. All showing up dressed in the same hockey jersey (which was a pretty common sight back in the heyday of nu-metal) with a big 50 on the back, they at least had their branding on point… After a very danceable intro, they immediately showed us what to expect for the next half an hour through the bangers ‘Know Your Place’ and ‘They Are Here’, which is a goddamn grooviness throughout! The best comparison I can think of, would maybe be some of the bands that are part of the New Wave of American Heavy Metal like the groove masters of Lamb of God, especially with the killer track ‘Circle Pit’. A pity that the crowd wasn’t really ready to get a circle pit going, but it definitely wasn’t the band’s lack of trying to get them going! Vocalist “Roka” belted out his lines, at times with a real manic look on his face, going from more rap-like stuff all the way to some proper grunts with here and there even one of those demonically deep deathcore growls. Grooves for days, breakdowns that brought the roof down and tasty guitar solos, it just got it all. I think it’s about time for these guys to bring us some more new music with a full-length or something like that (hint hint)

Setlist:
Intro
Know Your Place
They Are Here
Smile On My Face
Match Made In Hell
Again
Circle Pit
Take A Bow

By the time Crucify The Faith took over the stage, the room was filled quite decently and the door outside could boast a little “sold out” sign. Their modern mix of melodeath, metalcore and some other elements is regularly catchy as hell and they manage to bring it with a very convincing kind of energy. Vocalist Aki takes up his spot front and center, growling and singing with heaps of passion and emotion and the guys backing him musically make sure they get noticed as well, from time to time coming to the front to connect with their fans or even going further by jumping over the fence and keep on riffing in the middle of the crowd! Newly added official member of the CTF clan, guitarist Janne, proved us all why he is the perfect choice for them, dancing around on the pounding riffs and beats on and off stage. Like I’ve heard many bands and musicians say that it’s good to be back on a stage, the really showed to everyone there that they did enjoy being back there. And the fans were right there with them, starting a modest moshpit from time to time. A perfect closer of a night filled with the quality the Finnish underground has to offer.

For more pics of the night, go check out the photo report here.