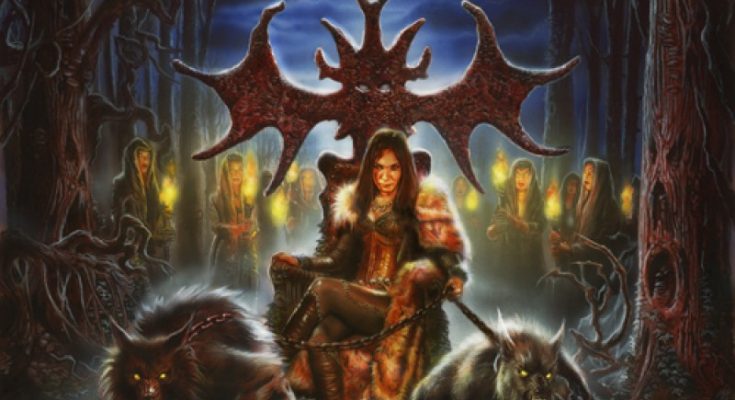 There are some genres, like  80s heavy metal, that will always be around. Crystal Viper confirms this! The Polish heavy metallers around Marta Gabriel are back with more old school, straightforward and raw heavy metal. Four years after their latest album Possession the foursome returns with Queen of the Witches. The album, featuring new bass player Blaze J. Grygiel, will most certainly please every admirer of the 80s metal spirit. With powerful vocals, intense melodies and impressive guest contributions, this classic metal party just can’t go wrong…

Queen of the Witches opens with The Witch is Back. Marta yells at dizzy heights and gets immediately accompanied by thundering guitars and pounding drums. The message is clear; Crystal Viper is alive and kicking! The track is a nice representation of what the rest of the album will sound like. It’s powerful, to say the least. You should check for yourself and take a look at the video below! Crystal Viper also shot a video for When The Sun Goes Down. The intro reminds me of Mötley Crüe drums. This a nice mid-tempo song where Marta’s firm vocals play the leading role.

Thé highlight of Queen of The Witches is undoubtedly Do or Die. Mean guitars that crush your ears and an incredibly sing-along-able chorus will certainly cause a party at live performances. It’s actually a pretty simple song; straightforward guitars, catchy riffs and a melody that makes you shout along. On this track, you’ll also get to hear Ross the Boss (ex-Manowar) on guitars. Flames and Blood is another song where a guest joins forces with Crystal Viper. Venom Inc.’s Mantas plays the guitars on this one and you’ll clearly hear his impact! It’s certainly one of the strongest tracks on Queen of The Witches. Flames and Blood sounds incredibly fast and aggressive, while the vocals remind me of King Diamond.

With We Will Make It Last Forever, Crystal Viper reveals its softer side. This is a decent power ballad where Saracen’s Steve Bettney sings a duet with Marta Gabriel. It’s a pretty intense and emotional song, but I just can’t take it seriously because of the lyrics. They’re quite predictable and superficial. On a more positive note; the band treats us with a cover of Grim Reaper’s See You in Hell. The bonus track can be found on every copy. Those who are willing to buy the exclusive limited LP version will also find Crystal Viper’s interpretation of the Exciter classic Long Live The Loud!

In conclusion: this is a more than decent heavy metal album that fans of Iron Maiden, Mötley Crüe and Judas Priest will most definitely like. Crystal Viper doesn’t offer anything new with this record but you can really hear the passion for heavy metal. There are so many qualitative songs on Queen of The Witches that you absolutely won’t get bored. Crystal Viper has an excellent grasp of what 80s metal should sound like. I would also like to give an extra round of applause for Marta Gabriel. This lady kicks ass! She doesn’t only have an incredibly powerful voice, she’s also a gifted guitarist and wicked songwriter. Marta and Crystal Viper made an impressive comeback with this heavy metal gem and they deserve their place among more famous bands within the genre! Make sure to catch them at Biebob on April 8th!