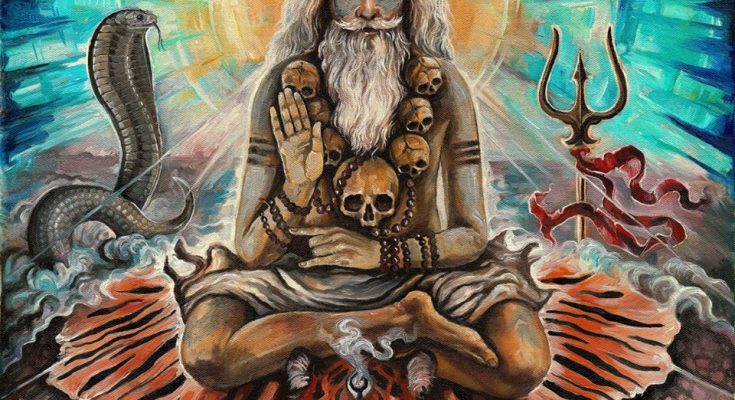 Many fans have anticipated the return of the outlandish cult band Cult of Fire and after seven years of patience, the Czech trio has finally narrowed the gap between their albums. As they returned with a double album release Moksha/Nirvana.  In Hinduism and Jainism Moksha refers to the freedom from the cycle of death and rebirth. The central concept to be attained through three paths during mortal life. The first part of the Cult of Fire double album highlights further on Kali the Hindu goddess of time, creation, destruction and power. The Czech trio once again infuses their lyricism with the thematic subjects on Hinduism and the main character which the band gives praise to the Hindu goddess Kali.

The album is set on complex measures of creating an archaic and esoteric atmosphere through the medium of black metal music. Cult of Fire continues to adhere to Hinduism and occultism, Moksha has more of a characteristic sound and proves how the band can create such a refined masterpiece of black metal. Furthermore, it’s legitimate to say that Cult of Fire through the long years of experience developed their style in a very unique and distinctive way. The Czech trio is comprised of Devilish (vocals), Tom Coroner (drums), and Infernal Vlad (guitars, bass, and vocals). While other instruments such as percussion and keyboards are helmed by guest musicians. Moksha is a brilliant album that presents a highly innovative style the musical elements are extracted from the oriental ethos of tribal elements and achieved by refined craft.

From the first opening moments of the first track Zrození výjimečného “The Birth of the Exceptional” Cult of Fire begins with the muffled sounds of the drums. With a musical texture that paints the dark shades of occultism, they also blend elements of post-rock. While these elements are rather luminous compared to the dark sprawling atmosphere. Cult of Fire transforms the music into the raging tempo of black metal aggression.

This ingenuity and creativity made them incomparable, here the qualities are poured into the texture. For example, the minimal use of the Indian sitar creates a beautiful atmosphere. Yet the band is keen to show more of the vibrant elements on this album, the cascading synth that eases the mood into hypnotic bliss. And the power of the tremolo riffing reverbs with the raspy vocals, the scale of melodies and synth are stately layered within the tracks. With orchestral arrangements and male choral adding an extra and bombastic feel to the track Cult of Fire transcends to higher plains. The band pushes the boundaries to outer limits, Město mrtvých “City of the Dead” is fulfilled by the harmonizing lead guitar from the subtle melodies of the sitar to the soaring quality of the raspy vocals.

The album showcases the elegance of the melodic lead guitar and the juxtaposition of the Indian drums and female chants creates a lavish atmosphere. Cult of Fire‘s innovative and genuine approach made their own identity through such esoteric subjects of mysticism. The clear emphasis on mystic melodies is focused on the entire album. Moksha is stuffed with vibrant melodies and other raw ingredients, the third track (ne)Čistý ”Impure” is processed by rapid tremolo riffing.

The sudden violent currents of the blasting drums transform into a maelstrom, with tremolo-picked riffs displayed at full scale. The malefic effect of the raspy growls allows the tempo to shift. The band also emphasizes creating a meditating atmosphere once the drums shift into the mid-tempo. The synth and the guitars conjure up an esoteric atmosphere, the melodic riffs and the synth overflows along with the subtle touches on the sitar. And the music becomes profoundly catchy and imaginative Moksha is without a doubt a gritty album, saturated with lush synth. Har Har Mahadev is definitely among the fastest and the most bombastic songs the band has ever written.

The wide use of the muffling tribal drums juxtaposed with rich soundscapes. The profusion of rock elements creates a perfect appeal, apart from the rich texture of the synth the harmonizing guitar brings a lot of quality. Cult of Fire has crossed new boundaries with this release, and simultaneously they conjure up the malefic sound of black metal with the highest level of precision. The final track Mokša is employed by deep expressions, again the qualities such as synth and the raspy vocals shine throughout the track. Crafted with acute tremolo the blistering blast beats reverberate with a harmonic balance. Achieved through the variable atmosphere and hypnotic ambiance, the blazing tremolo-picked melodies, and the drumbeat literally transcends. Cult of Fire has outdone themselves again if you fancy bands such as Mgla, Batushka, Gehenna and Blut Aus Nord then I highly recommend you to check out this stellar release.