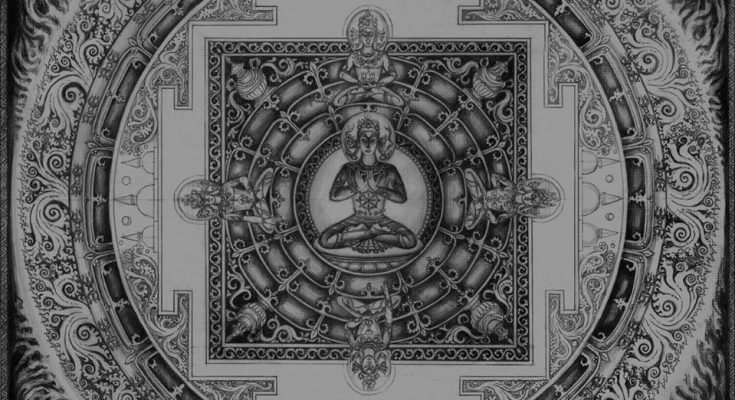 Apart from the stereotype of average bands, today the black metal genre has been offering a vast array of innovative acts. With distinctive groups such as Mgla, Batushka, Blut Aus Nord and Deathspell Omega leading to new horizons. Bridging the orthodox methods of black metal with modernistic and inventive ideas through an imaginative prospect. Each of these innovative bands intertwined rich themes and musical textures. Another band that shares this paradigm is the Czech black metal outfit Cult of Fire, who has ascended the top list of the finest bands in Europe. They formed a decade ago by Devilish (vocals), Tom Coroner (drums), and Infernal Vlad (guitars, bass, and vocals). Unlike the band Batushka which incorporated the Gregorian chants into the music and took a raw approach to black metal. Cult of Fire‘s sonic platform implements other elements such as the tribal drums and Indian sitar.

These instruments were heavily introduced on the band’s groundbreaking sophomore मृत्यु का तापसी अनुध्यान . “Ascetic Meditation of Death” was a creative work of art. One of the main features of this extraordinary outfit is the ability to create chromatic textures. As a matter of fact, Cult of Fire may be one of the first bands who fuses the Indian musical themes with a cult black metal style. The common similarities to the Finnish black metal act Impaled Nazarene who introduced similar themes to their lyrics may refresh your memory.

Such variations and aesthetics are brought into the music to add a constant change in the tempo. Besides being one of the best black metal acts, Cult of Fire also has a creative fashion when it comes to the stage appearance. First of all, they all dress in black robes and perform communion masses on stage similar to Mayhem. These unique and apparent features are also combined with other occult artifacts such as candles and skulls. These theatrical effects give the audience the impression of a dark ceremony. The Czech trio exploits the themes of occultism and black metal, and lyrically they delve into Hinduism and mysticism. This makes the band quite unique and unparalleled among the modern acts of black metal.

The musical style of Nirvana is very similar to the sophomore album which was released back in 2013. And it involves atmospheric elements such as synth and chanting. The opening track Buddha 1 see’s the band focusing deeply into the emotive power of tremolo-picked riffs and rich melodies. With the soft layering of musical undertones that involves oriental instruments, and the profusion of the atmospheric elements creating a dark mantle. Every instrument sounds homogeneous, as each of the five tracks here is built on complex textures.

Buddha 2 is displayed with raw tremolo pickings and violent blast beats. This mid-tempo track features a complex mixture of black metal melodies, and they are quite inspiring. Each guitar segment is catchy, including the rhythm which provides an extraordinary feel. The keyboard sound is very rich and appealing while the tremolo guitars are layered with the synth currents. The vocals are raspy and evil. Cult of Fire reinvents its own niches as they expand their scope through creativity and the result is achieved through a daring mindset.

The tracks on the Nirvana album are layered with rich textures and catchy melodies, Buddha 3 is elaborated and achieved by skillful and brilliant soundscapes. That captivates the ethnic spirit of oriental sounds mixing the magical synth and the refined modern style of black metal. Since the sophomore release, Cult of Fire presented fine aspects to songwriting. The masterful creativity in writing music is definitely beyond trendy measures. Buddha 4 involves the fiery tempo of the blasting beats and the blazing riffs constantly maintain the pace, the track also blends some orchestral arrangements which result in an infuriating tempo that reeks of raw black metal. The lushness of the final track Buddha 5 scowls with aggression and begins with blazing tremolo-picked riffs and swirls further with energy.

While the drums always provide a rawer sound, the keyboards are used to evoke a darker flow to the tracks. Cult of Fire‘s ability to transform the mid-tempo to rapid pacing shows a unique change in form. Nirvana presents a modified style of how modern black metal bands can push the boundaries and to expand further into idealistic ways to find perfect harmony.