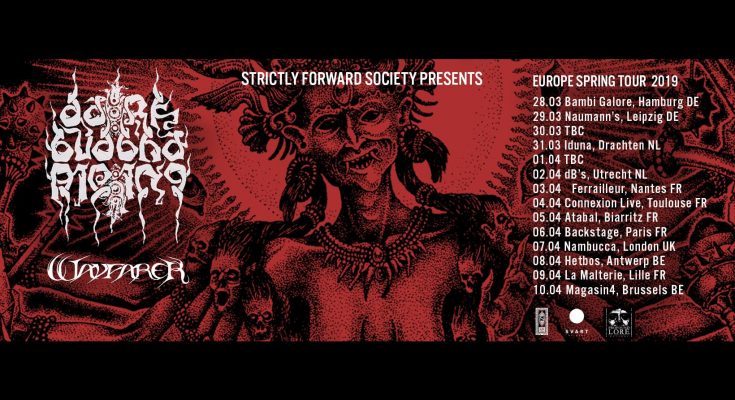 For those of you gearing up for Roadburn, what better way to do it than via a heavy dose of psychedelica and Americana tinged black metal.

It seemed like an unlikely combination to put the crazy Fins of Dark Buddha Rising on the same tour as Wayfarer from the Old West, but they both held their own in their own fields.

The band from Colorada got the honour  to open the stage. It was their first time in Belgium and they’re not exactly a household name like for instance their spiritual brothers Agalloch were, but they presented their material quite convincingly.

If they were an Alestorm type of band, they would have probably dressed up as Indians and do a rain dance around the bar, but these guys rather have the music itself tell the tale how the West was won. No gimmicks, just a stripped down drum, bass, guitar approach with riffs as massive as the Appalachian Mountains themselves.

Most of the songs were taken from their latest album ‘World’s Blood’ ,which is without a doubt their finest work so far. Tracks like ‘On Horseback They Carried Thunder ‘were performed every bit as epic and grandiose as the title would suggest.

With our scalps still intact, the second part of the evening began under a barrage of droning noise. l

Dark Buddha Rising had risen.  It was strange to see them in such a small venue after the performances they had given in previous years on Roadburn, for instance; the memory of the Waste of Space Orchestra collaboration with Oranssi Pazuzu still fresh in mind.

Their performance tonight might not have been so monumental in scope as that magical event, still that  did not hamper them to turn this venue into a psychotropic dronefest that makes Bowman’s exploration of the giant Monolith in orbit around Jupiter in ‘2001: A Space Odyssey’ like taking out the dog for a stroll in comparison.

Their music works best when experienced live. They mount a immense wall of kaleidoscopic drone doom that mesmerizes you from the first humming of the amps to the last screeching feedback loop. Following the set song by song  becomes completely irrelevant. You need to let yourself be completely immersed in their sonic psychotropic bubble, forgetting all sense of time and reality around you.

Like a ritual they built up the audio excess until its final release  when the last drone echoes away.