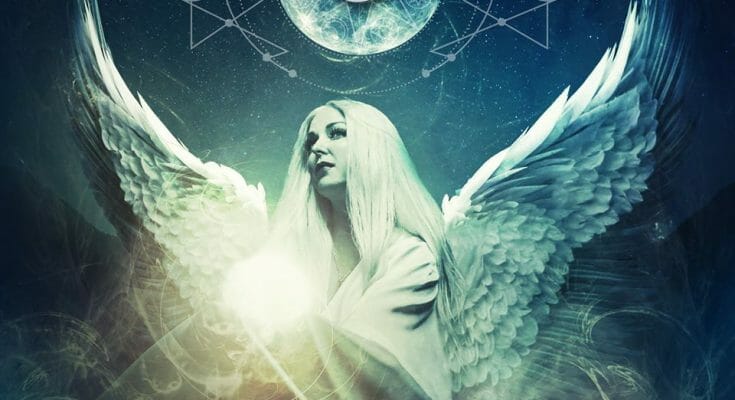 Introducing the new protagonist Luna, Dark Sarah invites you to their mythical world of orbs, ravens, rabbit-headed people and Mörk. With their fourth studio album ‘Grim’, the band has brought us a new horror, fantasy story this year. Luna gains the magical power to see her past by a blue orb, helping her to reflect all occurrences and unveil the truth of why her heart was frozen. She casts a compelling spell over the citizens of Grim. As mighty as no one could have imagined, she rises, forming an army marching against their conjoint enemy.

‘Grim’ is available as a CD jewelcase, a 2 LP gatefold and a digital album. The cover shows us Heidi, in her role as Luna, with angel wings in the night, holding a light ball. Guest singers on ‘Grim’ are JP Leppäluoto (Harmaja, Northern Kings) and Jasse Jatala.

After a short introduction of Luna, ‘Grim’ knows a strong start with ‘The Chosen One’. You hear immediately that Dark Sarah is musically a strong band. I’m surprised there is no keyboard player in the band because it’s a common used instrument in the cinematic metal genre, as well on this album. Other instruments you can hear on ‘Grim’ are the violin and the harp in ‘Melancholia’ and ‘Iceheart’, a calm song halfway.

Heidi has an angelic soprano voice and hits her high notes perfectly, but sometimes she sounds a bit monotonous. In songs like ‘Illuminate’, ‘The Wolf And The Maiden’ and ‘The Dark Throne’ Heidi sings technically perfect, but I personally think there is little emotion in it.

However, in the typical cinematic metal songs like ‘La Folie Verte’ and ‘Mörk’ there is a lot more variation in Heidi‘s voice. Also the powerful support of the choir gives an extra epic, theatrical feeling. Dark Sarah also added musical elements like a music box and old radio piano music. Another strong song is ‘All Ears!’, where it sounds like you hear Heidi through a speaker.

Dark Sarah is musically a very strong band as I mentioned before. All the instruments they use sound great together, I also really like the fact they use a lot of extras to give their songs a finishing touch. The choir and guest singer Jasse are an added value to ‘Grim’. Also rhythmically this album is very varied, it’s just a pity that Heidi only sounds her best in the up-tempo songs.