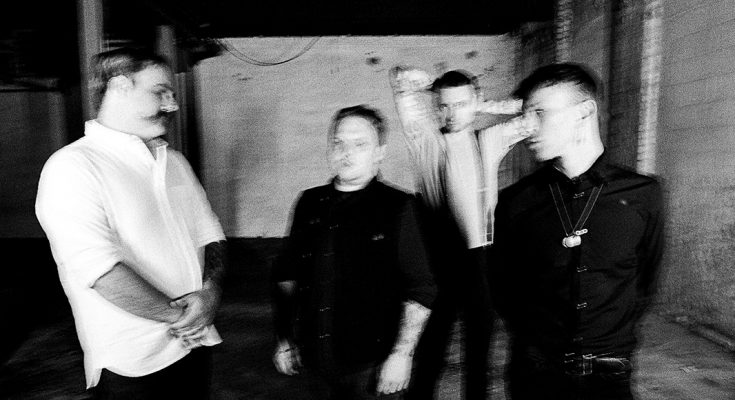 Rhode Island-based noise rock band Daughters is a band with a reputation, to say the least. After grindcore outfit As The Sun Sets died out, noise rock band Daughters was born and it didn’t take them very long to reach a cult status. After several breaks they got together again to record their fourth album ‘You Won’t Get What You Want’. It’s not as though Alexis Marshall and his merry bunch needed a warm up act. The mere anticipation of seeing them perform in the rather small Trix Club had most of the crowd going. However they were kind enough to invite a young noise collective from Ghent to open for them. Enter Youff.

As I am writing this, Youff celebrate their sixth anniversary. Since their founding in October of 2013 in Ghent they’ve managed to become pretty well-known in the noise rock (or as they like to call it themselves: harshcore) scene. I must admit that I hadn’t heard of Youff upon walking into Trix Club, but I was pleasantly surprised as their experience – and the confidence to boot – really shows on stage. They immediately delivered when they opened up with a true wall of sound: ‘Muzak For The Mass‘, the opening song from their latest album ’20/20 Hindsight’.

Youff most certainly have their own style combining tight drums and noisy, almost synth-like guitar sounds with deep, droning bass rhythms that seem to sync with the rhythm of our brain waves. Add a layer of vocals that range from shouts to dreamy rhythm over a wide spectrum and some sharper, more repetitive breaks to finish the mix, and you notice that these guys also know how to write a song.

Besides standing out – even within the scene – with their music , what also caught my eye was vocalist Michiel De Naegel (30.000 Monkeys) who is just an endless barrel of energy ready to explode any minute on stage. Seriously, if this doesn’t get you ready for Daughters, just go home ’cause nothing will!

In short: This is a band that have got their sh*t together. They know what they’re doing and they do it well. I wouldn’t be surprised to see Youff on stage in any underground venue from Le Klub in Paris to the Berlin clubs or squatting in Amsterdam. If you want to see them in a cool venue any in the near future, go check them out at Magasin 4, in Brussels on November 22nd!

When I entered the venue with my camera and went for my press sticker someone from management came out to ask me if I would also take pictures and if so “could you please take only nice black and white shots?“. Why of course. Black and white…, noise…. Yes, I’d love to!

After Youff cleared the stage and we all went for a beer, a cig and some fresh air it occured to me that our rather tiny Trix Club held a pretty international crowd. Among the few hundred people that gathered I heard Dutch, Flemish, French, German, Spanish, English, … So yeah, we could say Daughters playing here after all this time is a pretty big deal.

Being a bassist and a brewer myself, the first thing I noticed was that Sam Walker wasn’t on stage. What slightly surprised me though was that his replacement Chris Slorach wasn’t there either. Instead they brought a rather petite girl with a Mockingbird bass who, nonetheless, really held her own and was in total control. For example: There’s a common misconception that noise rock is just that. Noise. However, the amount of thought and effort that’s being put into the songs and sound is not to be underestimated. The bass soundcheck was proof hereof.

Despite being sober for over ten years, vocalist Alexis Marshall remains an impressive figure. The show started in ab-so-lute silence and the crowd awaited tense as f*ck. Alexis took the mic out of its stand, held it by the cord and walked across the whole stage while banging the mic on the floor before proceeding into the opening sequence of ‘Long Road, No Turns‘. Up next were a few more song off the new album before diving into some older work like ‘Less Sex‘ and ‘The Virgin‘.

Sober or not, Alexis does the most insane thing. Almost eating his microphone, plummeting down in a belly flop onto the stage, using a spectators hand to slap himself in the face, almost leading the spectators eyes while the rest of the band do their thing with utter concentration.

Set list:
Long Road, no Turns
The Lords Song
Satan In The Wait
The Dead Singer
Our Queens (One Is Many, Many Are One)
The Reason They Hate Me
Less Sex
The Hit
The Virgin
Guest House
Daughter
Ocean Song

Overall this was a night to remember. Two very skilled bands with a warm audience in a very nice venue and a more than great atmosphere. Wow!