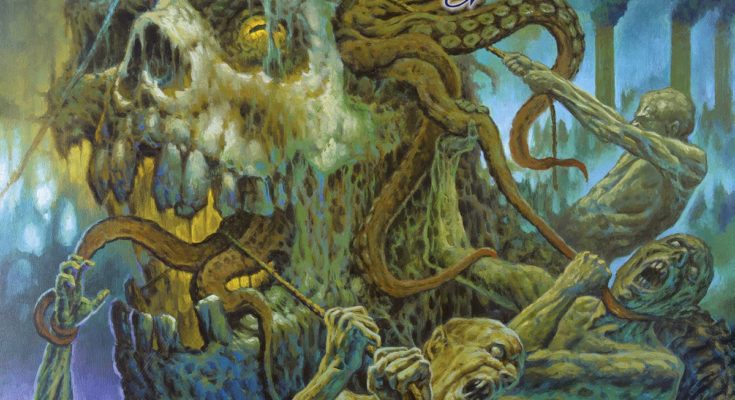 The firm foundation of the Japanese old school death metal was established over three decades ago with bands like Coffins, Intestine Baalism, Transgressor, and many others. And among the ranks of the early wave of death metal bands in Japan Defiled has been rooted in the underground death/grind scene since 1992. This sub-genre has been growing in the Far East Asian scene, in countries like Japan, Singapore, and Indonesia, and many each band began to bring an individual and trademark palette. Relatively speaking, Japanese death metal bands preferred to stick to the raw and filthy sound as they incorporated different styles like grindcore and doom metal. In late 1989 for example, Japanese old school death metal band Transgressor was one of the first bands to introduce and incarnate the old school tradition of death metal.

Three years after their colleagues, Defiled adopted a more brutal approach to death metal. However, the Japanese squad only released their debut ‘Erupted Wrath‘ in 1999. Presently their discography includes six full-length albums including the newly released album ‘Infinite Regress‘. Having said that, the only original member left is the guitarist Yusuke Sumita, while the rest of the band members joined in recently. The band is now comprised of the siblings guitarist/vocalist Shinichiro Hamada and drummer Keisuke Hamada, and bassist Takachika Nakajima.

The opening track ‘Divide and Conquer‘ kicks hard with grinding drums and primitive technical riffs. The style is influenced by old school technical death metal, which gives the album a filthy sound. Most of the guitar riffs are centralized on displaying technical skills. The adaptation of the old school U.S. technical death metal is widely instilled in the songwriting. Crude and crusty riffs all seem to be saturated in the riffs. The third track ‘Tragedy‘ is an empowerment of the rotten death metal growls and grinding drums. Defiled spew nasty riffs mostly fitted in mid and fast tempo.

Drums, on the other hand, are intensely operated by blast beats and hammering blows. The album quickly shifts into rotten death metal mode. There are also varieties of guitar frills and hooks, that gives the album a twisted sound. These trademarks are impressive and provide a fierce and brutal tone. The effort is quite organic and coherent.

The performance is straightforward with the grinding percussion, jazz drumming technique and shredding guitar riffs. Defiled tend to change tempo too with overwhelming breakdowns from time to time. ‘Systematic Decomposition‘ is a two-and-a-half minute track of pure old school brutality. Besides the technical aspect, the drumming performance and the vocals are both just as impressive. In the span of twenty-five years of business, the Japanese death metal group managed to create their own identity.

The latest album is a good mixture of raw technicality and a concrete slab of brutality. ‘Legacy‘ and ‘Masses in Chaos‘ are characterized by the fast-paced drumming. Scaled on different variations, Defiled‘s ability to experiment with different sounds and styles is a testimony of their long experience.

‘Centuries‘, for example, is an odd track. Specifically the guitars and bass expand over the experimental territories. The strange fusion of technical drumming and crusty riffs continues on other tracks like ‘Invisible War‘. The band deserves credit for their technical accuracy. Their focus on complex and raw technicality makes the whole album feel organic and quite intense. Throughout the duration of thirty-five minutes, Defiled give a wide particularity to their crusty death/grind riffs.

‘Ignorant‘ is a standout track that bears a direct influence on the band Impetigo. ‘Infinite Regress‘ is oppressively harsh and rotten. Even the bass guitar emits a distorted cacophony. ‘Slaverobot‘ is played at a fast tempo and relentless blast beats. The drumming technique is derivative to the early death/grind style.

‘Infinite Regress‘ is chaotic, brutally raw and crusty. If you are into bands like Cryptopsy and Suffocation then make sure to check out this album.