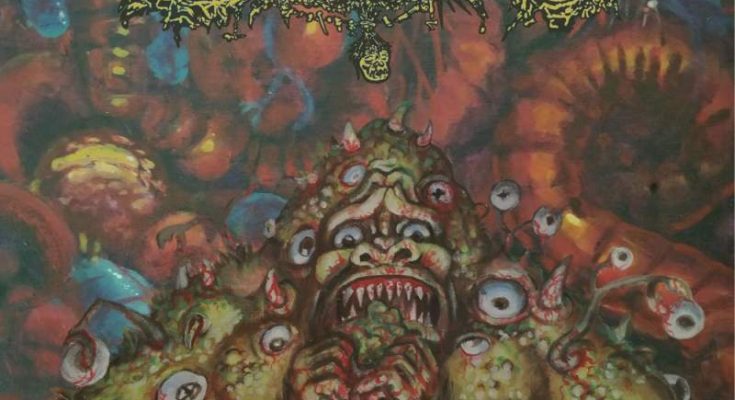 Dipygus’ sophomore release “Bushmeat” will take you all the way back to the early years of death metal evolution. The Californian based group have made a name for themselves in the underground scene when they released their first album “Deathooze” two years ago. Although the theme of the music is fully drenched in blood-soaked gore and cannibalism, “Bushmeat” reeks of sickness and fetishism. In reference to the band name, Dipygus is an extreme form of caudal duplication where the body axis forks left and right along the torso. Musically the latest album is built on the elements of eighties grind gore and nineties death metal.

Though the album span seven actual tracks plus an intro and outro exploring the primordial facets of the sub-genre where the similarities to early Autopsy and Impetigo are showcased. With its primitive and simplistic approach to death metal, Dipygus provide a set of groove-laden songs that are infused in slow and fast tempos. However certain compositions here are structured on semi-technical guitars, while some of the creepy movie samples add an aural horror to the songs. “Bushmeat” pushes the limits beyond the debut album; the songs are effectively twisted and exudes grisly vibes. After the frightening ambient intro “Ape Sounds”, Dipygus takes you to an unearthly jungle where carnivorous beasts lurk to hunt you down.

“St. Augustine, FL 1896” bursts in in an energetic pace and initiates with grinding drum beats and sharp-sawing riffs. The zombified growls of Clarisa play a pivotal role in providing extra chills to the songs. The sophomore offers a plethora of heavy riffs and draws out themes from the eighty’s horror flicks. “Osteodontokeratic Savagery” manages to combine the elements of doom metal, but what will strike you most is the frightful atmosphere created by the guitarists Dustin and Sam.

When the music shifts to slower sections, the band immediately shows the influences to doom metal by offering hooks. The slow oozing riffs on the following track “Plasmoidal Mass (Slime Mold) suddenly swerves into a retro death metal style that almost sounds like Autopsy’s “Mental Funeral” album. Dipygus maintains a visceral level in musicianship, for example the drums mainly sound brutal but unpredictable. In one moment, drummer Bog Stomper veers from the slow section only to improvise with crashing cymbals and blast beats. There are plenty of different variations in the quality of the riffs. The abrupt change of pace is usually followed by the riff progression and blast beats. The album title track contains variable tempos, especially when the drums shift to changeable paces. The rumbling bass guitar is handled by Dayan. They work perfectly with the other instruments.

While the technicality here isn’t overly used, Dipygus manages to convey an organic performance. The album production is clean. Its audible sound production enhances the instrumentation overall. The guttural grunts and the rasps are frequently used to add a horrific feel throughout the album. “Bushmeat” is a raw death metal album that contains many grooves sections played brutally to sound like they were recorded back in the classic era. Some of the guitar parts here remind me of other modern death metal bands such as Vastum. Another quality that is clearly displayed, is the complexity of the riffing structure. The song composition of “Long-Pig feast” is derivative of Autopsy’s riffing style. The track is packed with chunky riffs and grooves.

The crawling lead guitars are something that the band has been perfecting since the debut album. The final track “Myiasis in Human Mouth” combines groove and atmosphere without straying from the extreme brutality of death metal. Overall, I didn’t have many expectations for this release but now I can truly say that I am absolutely overwhelmed by the unspeakable gore. There aren’t many bands that possess such talent. This is why Dipygus‘s sophomore album is recommended for fans of retro death metal.